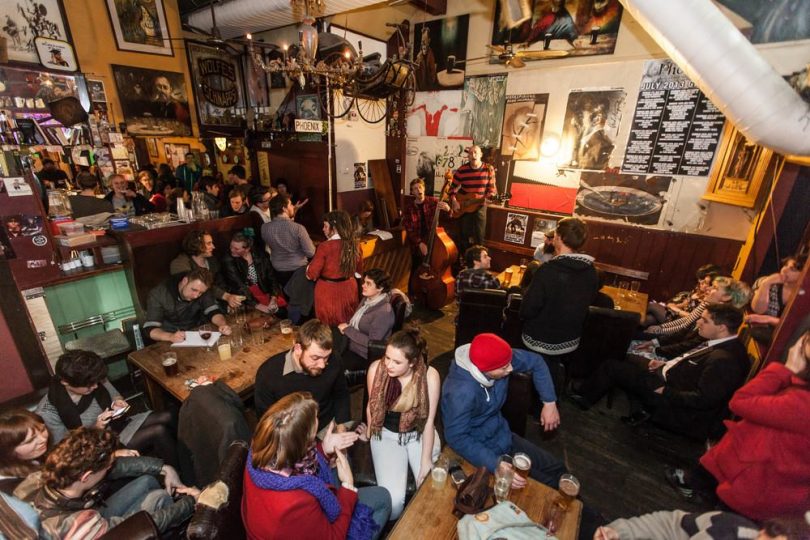 Embattled independent music venue and Civic pub The Phoenix won’t be calling last drinks anytime soon, with its last-ditch public campaign to stay open giving it the breathing space to begin trading its way out of trouble.

Spokesperson Netti Vonthethoff said that between the crowdfunding campaign and direct donations, the pub had garnered $55,000 in the past month, still short of the $75,000 target but enough of a reprieve to continue trading and negotiations with creditors.

“We’re not out of the woods but we’re no longer holding our breath thinking ‘oh my God’ we’re going under,” Ms Vonthethoff said.

Calling it Phase 2, Ms Vonthethoff said the focus had now shifted to building more trade and delivering more gigs and events, ”on what we can now deliver rather than just asking for donations”.

She said most of the bar staff was now back on wages, and others who had volunteered their skills and services would be contacted soon to help with more fundraisers, including a planned Laneway Festival which coincides with City Renewal Authority plans to clean up Civic’s laneways around the Sydney and Melbourne buildings.

The idea was in its early stages but was a “really exciting project” that would be a thank you to supporters and involve drinks, music and a lot of fun.

The Phoenix’s problems are complicated by separate debts attached to the two spaces it was trying to support after the disastrous Sydney Building fire that set in train the series of events which led to the pub’s financial meltdown.

“The current space got into deep financial trouble because we’d been propping up the side that was closed, the original Phoenix, to get that reinstated,” Ms Vonthethoff said.

The pub racked up $75,000 in debt, on top of what was owing from the dispute with the landlord of the original Phoenix space after the fire, including a claim for $200,000 in back rent.

Ms Vonthethoff said the current trading space’s landlord had been fantastic and negotiations were continuing with its creditors.

“That side is OK, now it’s just figuring out what happens with the other side, which owes quite a lot of money due to the fire, the closures, rents claimed and legal fees,” she said.

“We haven’t heard anything back but we’re still hoping there is a willingness at some stage from the owner to negotiate.”

Ms Vonthethoff said the public had come out to support the pub and it was now trading well.

“There have been nights where we’ve had the big queues out the door – it’s quite a while since we’ve had that,” she said.

“So long as people are coming down to support the live music, then we’ll be all right.”

fridgemagnet - 20 minutes ago
Absolutely. It is a massive oversight. View
jessie - 1 hour ago
The question has to be asked why this path extension and bridge weren’t completed at least two years ago. View
News 10

@The_RiotACT @The_RiotACT
The ACT Government is continuing to back the full rollout of the ChooseCBR vouchers despite claims from the Opposition the scheme failed to hit the mark with businesses https://t.co/W1eCS3K5Cv (23 minutes ago)