Plan aims to bring community back to Haig Park with makeover 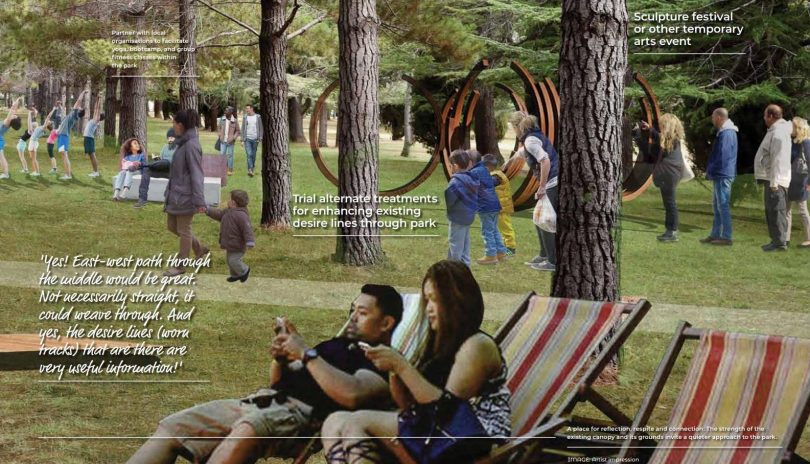 The plan aims to activate Haig Park and make it central to the growing community around it. Photos: Supplied

Haig Park will become a venue for community events and include a new walking and cycling path, better lighting, fitness facilities, and improved amenities and playgrounds under a plan released by the City Renewal Authority.

The plan, which aims to make Haig Park safer, more enjoyable, and better used, is the result of a community engagement program last year, and the Authority is now going back to the community for feedback.

The area’s population will surge in coming years as the redevelopment of Northbourne Avenue takes shape and the park is seen as a major community asset in need of a lift. There have also been concerns about its safety, particularly after dark.

“The plan is a strategic document that sets out actions to achieve the community’s vision for Haig Park,” Mr Snow said.

“Proposed physical improvements include an east-west link for pedestrians and cyclists; new lighting along key routes and among the trees; fitness equipment and running tracks of varying distances; barbecue facilities, improved amenities and a pop-up nature play and children’s playground.”

“Haig Park is a really important community asset and we want it to be a place that is used, enjoyed and embraced by many Canberrans and visitors,” he said.

“This plan will put in place actions that the City Renewal Authority can take to improve the park in the short term while also recognising that more people will increasingly be using it as their local park.”

Mr Snow said the Authority was looking to make quick, temporary improvements that would instantly make the park a better place to visit or pass through.

“We will assess these improvements to see whether they should be implemented permanently,” he said.

The Authority will also be looking at the existing depot site to see how it can be used for community events such as a pop-up stage or pavilion.

It says the plan also strengthens the park’s heritage value with interpretive signage that explores its historical nature.

“The input we have received from the community has been very clear that there needs to be a balance between making the park more people-friendly and maintaining its heritage significance,” Mr Snow said.

“Importantly, any improvements to Haig Park will be in accordance with an approved Conservation Management Plan, which will protect its heritage values.”

To see the Haig Park Plan and to provide feedback visit www.cityrenewalCBR.com.au

A playground would be great

Haig park is the wind break for civic.
Replace that and goodluck.

It’s just a backdoor way of assigning its amenity to the light rail “value adding” tenements to be built nearby.

Hope the cycle and walk paths are separate!! Some fun outdoor games would be good.

I love the facilities idea. I just hope they don't block off the pathways whilst they do the update.

Bins! There's like one bin in the entire block.

Maya123 - 2 hours ago
Acton, Have you ever voted for Labor? View
Spiral - 3 hours ago
Opposition to same sex marriage (for example) is not exclusive to Christianity. Faiths that are sometimes violently opposed t... View
chewy14 - 5 hours ago
Acton, Except by definition facts don't change. Also, I find your definition of a "conservative" quite amusing. By that defin... View
Opinion 10

Capital Retro - 3 hours ago
That means it will be a Labor/Green government forever and there are signs on this thread that that is no longer palatable. View
HiddenDragon - 6 hours ago
It's not minority government - it's a coalition, with Labor too often following the Greens down the rabbit hole, and the Gree... View
Acton - 9 hours ago
Do you remember Pitch n Putt at Woden? A popular community recreational area. Now derelict and set aside for apartments.... View
Property 12

Capital Retro - 6 hours ago
I did not claim that interest rates cuts only happened now. They have been happening for 10 years and this was the policy of... View
chewy14 - 16 hours ago
Capital Retro, Firstly, most of the interest rate cuts happened well before the current crisis, so you can't just claim your... View
Brenton Higgins - 17 hours ago
Joshua we’ve had two elections on that already. Canberra decided. View
News 48

New plan for the greening of Braddon

@The_RiotACT @The_RiotACT
Undecided about who to vote for in the ACT election? Our latest newsletter wraps up the last 7 days in local politics + all the other news of the week https://t.co/yP6PEPY6bp (3 hours ago)