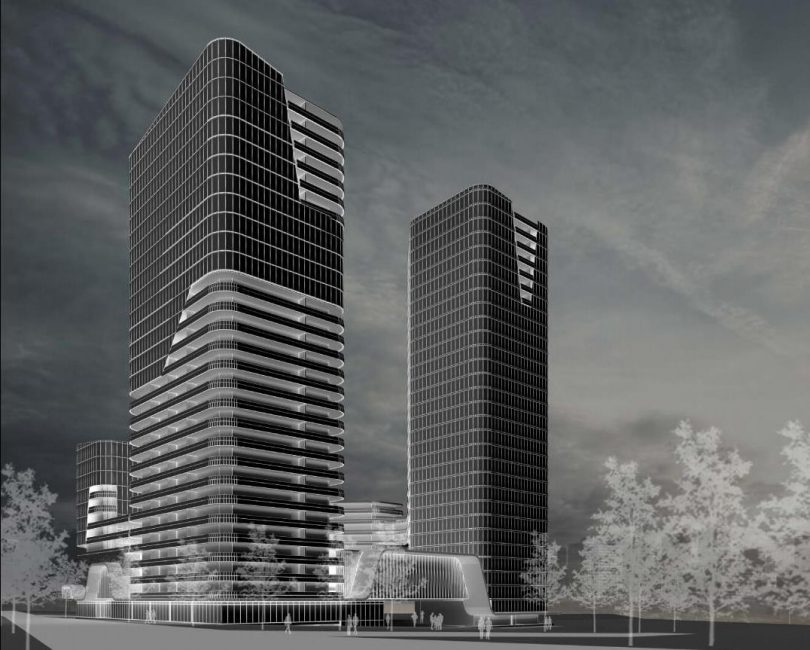 View from the north, Easty Street, of the planned development. Photos: Hindmarsh.

The Woden Valley Community Council has called on the ACT Government to revisit precinct planning in the Town Centre, with another multi-tower ‘marker’ development planned, this time behind the Woden Police Station.

Hindmarsh is proposing a mixed-use four-building complex of 710 apartments with four towers, the tallest of which is 27 storeys, on the northern corner of Easty and Wilbow Streets, formally known as Block 13 Section 81, Phillip.

Geocon’s planned massive WOVA development on the former Tradies site on the corner of Melrose Drive and Launceston Street also includes a marker building, of 24 storeys.

Hindmarsh’s proposal includes a mix of ground level commercial uses within a four-storey central building podium, potentially including a supermarket/grocer of up to 500 square metres, cafes, and base services.

There will also be an as yet determined amount of onsite parking and a central podium park with covered walkways to connect the buildings, as well as various amenities such as a pool, gym, and barbecue area. 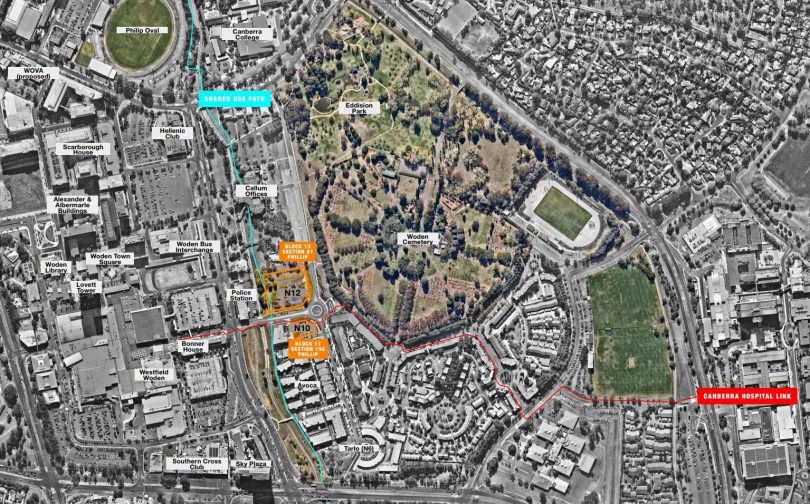 Hindmarsh is in the middle of conducting pre-DA community consultation, which will conclude at the end of August. It plans to lodge its development application in September, with construction to commence, subject to approval, in autumn 2019.

WVCC president Fiona Carrick said that while further renewal in the Town Centre was welcome it was another example of ad hoc piecemeal development that failed to integrate properly with the rest of the Town Centre, particularly Woden Town Park and the planned light rail station.

She said the council had pointed out to Hindmarsh that the active front in its development plan was on the south while the park and public transport infrastructure was on the northern side.

“Why aren’t we looking at how this integrates with the light rail station, Woden Town Park and open green spaces?” Ms Carrick said.

“If you have a suburb in the sky, 710 apartments, you would think you could take advantage of those people coming out and enjoying Woden Town Park and we could try to activate that.

“We need to revisit our precinct planning. Where are our open spaces, where are the community facilities, where do we meet, where are the places where people want to meet and eat?” 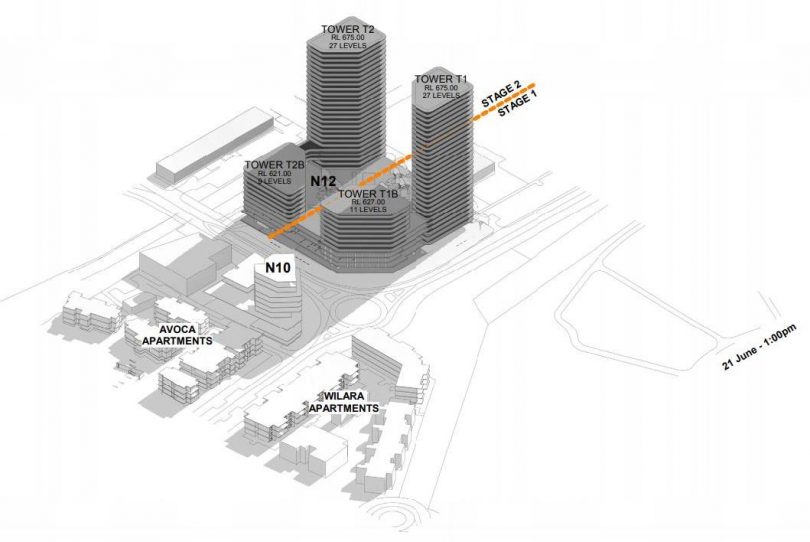 An illustration of the development showing shadowing.

Ms Carrick said that with light rail coming and densification happening the Government needed to examine the precinct’s public amenity in relation to the siting of residential buildings before it went too far.

She said there were still a number of publicly owned car parks, including the strategically critical one between the interchange and the Hellenic Club.

“If they just whack high rises on that they’ll really miss the opportunity to create a good place for the community,” Ms Carrick said.

She said that while the new developments would bring thousands more residents into the Town Centre, there would be very few community facilities available to them.

The council also remained concerned about the need for another marker building and overshadowing from the towers, despite assurances from Hindmarsh that their slender form will minimise it.

Hindmarsh has collaborated with Cox Architecture on the project.

Whatever their merits, or otherwise, it would surely be simpler and more honest to call them what they are “towers”, “high-rise”, or “high-rise towers” (for those who don’t mind a bit of tautology to make the point).

“Marker building” sounds like euphemistic spin, and after the first few in a location, they logically stop being markers – “oh look, there’s a marker tree in the plantation”.

Ashley Wright - 28 minutes ago
Evan Hawke that’s what happens when you are a new area and you get (most) of that stuff during construction. You mention th... View
Lifestyle 7

Petition launched to limit Woden ‘out of scale’ mega-development

@The_RiotACT @The_RiotACT
The first week of the election campaign proper has come and gone, and one thing is clear - no one is really worrying about the cost of anything anymore, says Ian Bushnell https://t.co/U3JHzWzTby (19 minutes ago)