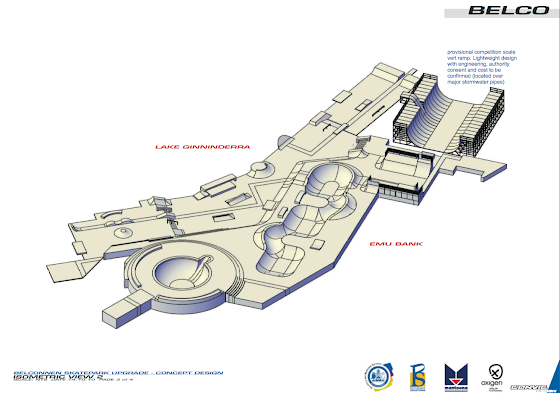 Territory and Municpal Services have announced their plans for the “Eastern Valley Way Inlet” (aka “that bit between Lake Ginninderra College and Emu Bank”).

There’s a concept design of the revamped skate park.

The design will retain the existing ‘Belco Bowl’ and will include a new street skate plaza with a mix of sculptures/obstacles, mini ramp, shelters, seating, new lighting and viewing areas. The upgrade aims to produce a high quality skate park of contemporary international skating and bmx standard with a focus on street skating to reflect demand and to offer a different, but complimentary experience to other skate parks in Canberra.

The project will involve two stages of work with commencement of construction in November 2010. The first stage of work includes the skate park and immediate public realm. Funding for the first stage of the upgrade has been provided through the Regional and Local Community Infrastructure Program, a Commonwealth Government initiative. The ACT Government is providing matching funding.

Whatever happened to the skate bowl at Charnwood? Still exist or a bunch of houses built on top of it?

The one on the top of the hill? Still there, although they removed the hurdy-gurdy a few years ago when the park was ‘redeveloped’… a term I use loosely.

Holy. Freaking. Cow. When I was skating as a teenager our town had a “bowl” that could generously be described as a hole in the ground that had concrete poured on it. Seriously, the angles would change every metre or so. If I was a kid skating these days I would be stoked with all the awesome parks I see around.

Please don’t tell me you are bored. Go and skate!

“offer a different, but complimentary experience to other skate parks in Canberra.”

I remember breaking bones there back in about 1990, trying to be a hero on a BMX.

Whatever happened to the skate bowl at Charnwood? Still exist or a bunch of houses built on top of it?

wonder how long after they fence it off they’ll start? area near water police ramp been shut for the beautification since 13/9 and nothing happening yet…..

Wow. Makes you want to take up skating.

I really look forward to that coming to fruition. It will be great for skaters and riders. Brings that area out of the backwaters so as to speak.

As someone that spent many many hours using that skate park in my teenage years, I say radical!

Capital Retro - 6 hours ago
I was surprised to hear a secondary school student tell me that teachers are now telling students that they have rights and e... View
Kasra Mn - 14 hours ago
At what $$ point is someone wealthy? View
Anita Patel - 15 hours ago
An excellent article. View
News 2

ACT resident - 6 hours ago
This latest CRS thought bubble promises flammable construction waste to be diverted from landfill and delivered for processin... View
simm - 20 hours ago
FYSHWICK is the wrong location for a high volume waste tipping station where that would interfere with surrounding investment... View
Opinion 1

rationalobserver - 7 hours ago
Its not just cars, all sorts of things now use our roads and it should be a shared cost. Usr pays and all that. In some subur... View
cycladelec - 16 hours ago
Plenty people with much more informed views than that Riot ACT know that now is not the time to impose a Road User Charge for... View
MERC600 - 1 day ago
What will be of importance is how the Feds look at electric powered vehicles. Fuel excise is a great earner for the Feds.. Ev... View
News 56

Anne O'Hara - 17 hours ago
Hannah Zurcher I have no problem with workers going for what they think they are entitled to, I do have a problem with them p... View
Nathan Lofthouse - 18 hours ago
Sorry who else is pulling 4% p.a ? View
Phill kirkham - 22 hours ago
Suez has a contract that commenced in 2013 and expires 2023, worth $180million. They have 5 other contracts worth around $12m... View
Property 46

russianafroman - 20 hours ago
Dukethunder You are not understanding what I am saying. I told you to understand what the heat island effect is. Yet you give... View
News 53

Jordania - 22 hours ago
Sanctimony has nothing to do with objections to Mr Seselja. Indeed, if there is any sanctimony around it is his. His ultra-co... View
News 38

@The_RiotACT @The_RiotACT
Queanbeyan-Palerang Regional Council has been named the most progressive metropolitan or regional council in NSW for 2020 https://t.co/2wSisTErgK (1 hour ago)

@The_RiotACT @The_RiotACT
Fiona Carrick is back in charge of the Woden Valley Community Council after a strong election tilt, and more fired up than ever https://t.co/83KCM8twvy (3 hours ago)