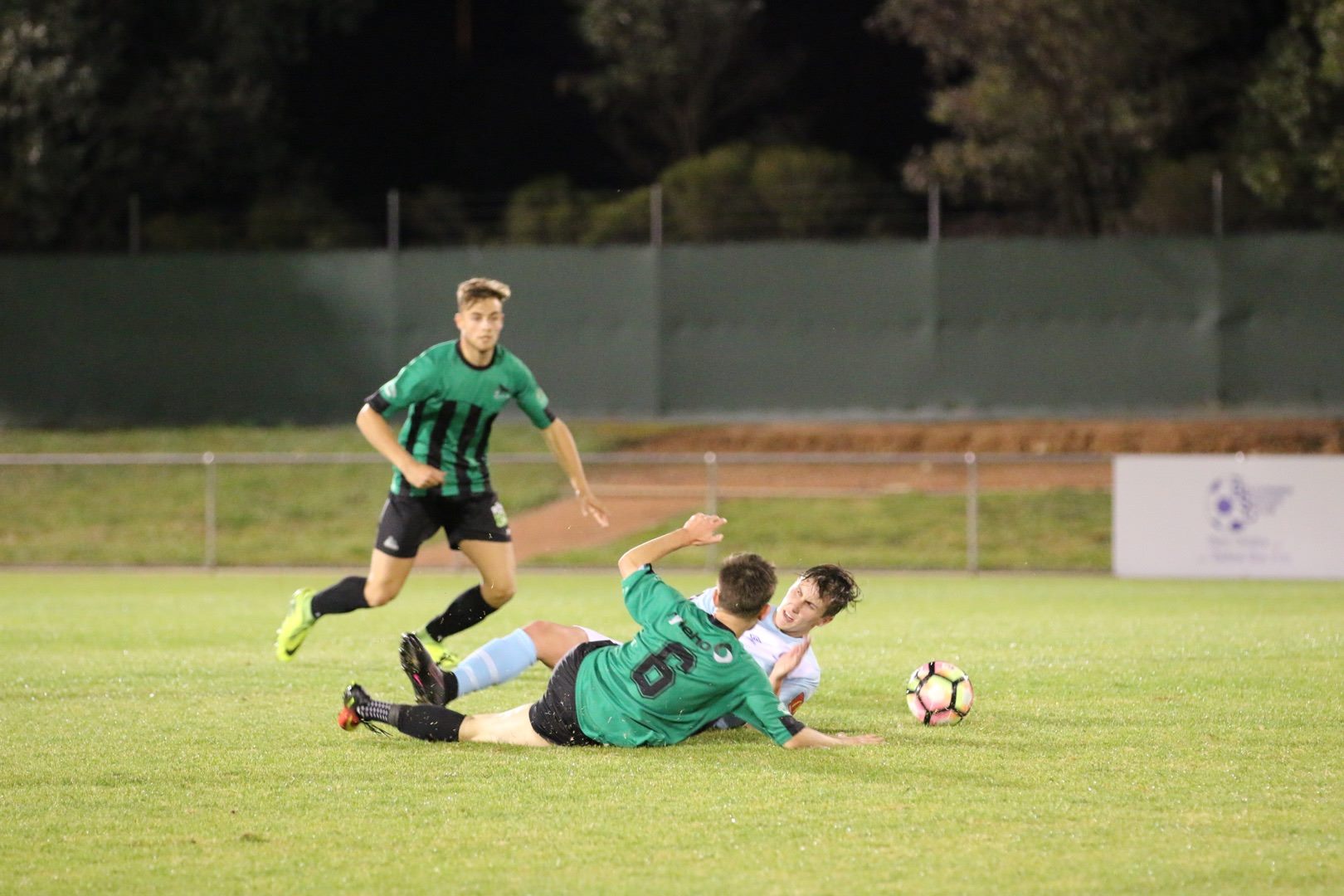 Revenge was sweet for Belconnen United on Saturday as they thumped their FFA Cup conquerors Monaro 7-0 at McKellar Park on Saturday night.

The home side set the tone quickly as Goran Mukevski opened the scoring after just two minutes and Belconnen looked to pile on the pressure. However, the Panthers held firm, breaking down attacks and looking to hit the home side on the break. But they were broken down again just before the break as Jason Ugrinic scored with just minutes remaining in the half to give his side a strong buffer heading into the rooms.

Ugrinic opened the second half scoring as he completed his brace after 59 minutes with a good strike, and from there United turned on the burners as they blitzed their visitors in the final twenty minutes.

Izach Clements grabbed United’s fourth with just under twenty to go, before Bul Juach got on the scoresheet a few minutes later. Monaro’s defence was in strife and United continue to work in behind them and Chris Ruiz was dismissed for the visitor’s as he picked up two yellow cards within minutes of each other.

Now with a numerical advantage as well United continued to force the issue and Juach and Clements both added to their tallies in the closing minutes as the result kept Monaro winless on the season and yet to find their first competition point.

A brace from Nick Faust was enough to get Tuggeranong United back onto the winners list on Saturday, as they kept Woden-Weston winless after seven rounds of the season.

>Both sides started well but it was the visitors with the majority of the chances and Faust grabbed his first after 13 minutes as he latched onto a through ball behind the defence and slotted home. Tuggies continued to create chances but couldn’t make the most of it, and Niko Kalfas had a penalty saved by Nathan Skirrow in the home goals.

Tuggerannong took a one-goal lead into half-time, but the home side were back on level terms almost immediately after the break as Daniel Crkovski finished off a good team move by beating the keeper and tucking the ball away.

Woden-Weston continued to produce chances but were unable to take advantage of them in front of goal, and they paid late on as Faust grabbed his second. The youngster picked up the ball a long way out from goal and blasted it past Skirrow into the top corner to give his side just their second win of the 2017 season.

A clinical home performance from Canberra FC on Sunday saw them remain top of the #PS4NPL table, as a three-goal first half was enough to see them past Tigers FC.

Goals to Niko Kresic, Jordan Lamb and Kofi Danning paved the way for the home win as yet another clean sheet kept their record as the best defence in the league.

A four-goal second half blitz from Canberra Olympic and another Stephen Domenici masterclass saw the reigning Premiers fight back to defeat Gungahlin United on Sunday afternoon.

Domenici put his side into the lead with his 14th goal of the season after 12 minutes, but Gungahlin worked their way into the match and began to control large swathes of the action. The visitors pulled level after 21 minutes as Michael Rinaudo fired home from close range, before Misko Naumoski scored for the third week in a row to give his side the lead at half-time.

Gungahlin continued to control the match but their lead slipped with just under twenty minutes left as Domenici scored with Gungahlin appealing for a handball in the leadup. Robbie Cattanach put Olympic ahead just moments later and Domenici extended it 2 minutes on as the home side got going. With Olympic in control Gungahlin struggled to match them for the final 15 minutes, and Joshua Calabria put the icing on the cake with four minutes remaining as he finished off a tidy move in front of goal.

Daniela Wilsener - 6 hours ago
Jake Wilsener Ash Garrity could be an option? View
Scott Abela - 8 hours ago
Robyne Mitchell Exactly, complaints from fire and ambulance drivers that these narrow roads are putting lives at risk.. View
Helen Prior - 19 hours ago
About the roads.Enough traffic. already. View
Community 1