Resolution of conflict within
communities, workplace, families
18 May 2021

PM's public service utopia: A 'friendly' warning, and a message for the mob 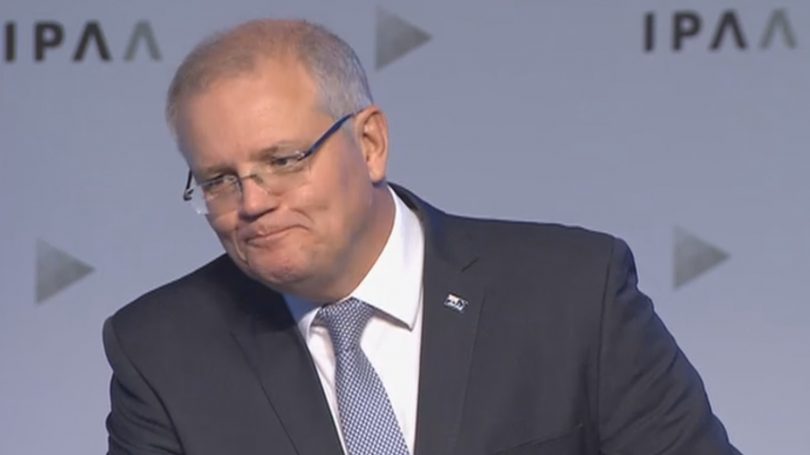 It is entirely fitting that in the week that our daggy Dad Prime Minister delivered his folksy homily to the cream of the Public Service that the biting TV satire Utopia returned to the screen with the bumbling infrastructure agency grappling with spin masters and all manner of political dodginess.

For all the PR and political can do, nothing much gets done. And whenever a red flag is raised it is dismissed as being a touch negative and something to be smoothed over in the greater (political) interest.

It’s all too gruesomely familiar and just a little depressing.

As was Mr Morrison’s speech to the Institute of Public Administration, not to be confused with that other IPA, where he again inflated the dreaded Canberra bubble, mixed footy metaphors and clothed a call for more private sector input and conservative ideas in the garb of diversity.

He cracked jokes, they laughed on cue, and the architect of Operation Sovereign Borders and the man who supposedly had Malcolm Turnbull’s back ever so nicely let them know who was in charge and how they had better not get in the way of Government policy.

One can only imagine what Mr Morrison would have said if Bill Shorten had been in his shoes.

Mr Morrison told the public servants at the Great Hall that they should be pitching their work at middle Australia, that mythical body of people that are so much more worthy of service than the rest of the nation. The quiet Australians, alluding perhaps to those who voted for his Government, drowned out by the lobbyists and special interest groups.

Forgetting that the public service, that’s you Centrelink, also looks after people in need, Mr Morrison somehow suggested that it’s the bureaucracy that needs to worry about the shouters, not his own party, unless he’s thinking about those pesky social justice folks.

But if anyone needs to listen to the voices of reason and ignore the vested interests, it’s the politicians, particularly those averse to science, not the public servants.

At the same time as Mr Morrison reaffirmed his commitment to an apolitical public service, he also warned against conformity, citing American academic Jonathan Haidt who claims US universities are stifled by an overwhelmingly ‘left liberal’ bias, as if the economic rationalists of the Productivity Commission or the patriots in Home Affairs and Immigration remained suspect.

He wants to see congestion busting in the PS hierarchy so new ideas (read not the usual obstructionist stuff) can come through. Here he was telling some of the most highly educated and well-connected men and women in the land that their evidence-based expertise wasn’t enough, they needed to look elsewhere, outside their silos, for inspiration.

The ill-fated Lord Varys in Game of Thrones always said that his loyalty was to the realm, as might be public servants who are duty-bound to provide frank and fearless advice when confronted with proposals that might mess with the environment, screw over the poor and defenceless or mean that laws may be potentially broken to achieve Government aims.

In light of the Prime Minister’s friendly advice, that may mean being a little too ‘courageous’, as Sir Humphrey from another universe might say.

In Utopia, the hapless agency head raising the red flags is inevitably overwhelmed by the spin masters and Government lawyers who accommodate private interests acting nefariously.

It’s a collision of fiction and reality that makes for darkly funny, and uncomfortable, viewing.

And then it came to me: The PM’s speech wasn’t just pitched at the PS. Why would you present something so banal to the country’s brightest and best?

It was also for the mob, reinforcing all the shock jock, right-wing tropes about the public service one might see in the Murdoch press. That the elitist intellectuals of cosseted Canberra are out of touch and can’t be trusted. That the climate isn’t really changing, that coal is beautiful, and the Reef will survive no matter what.

That despite the election victory, the insidious forces of the left were still going to take away the right to aspire, and your tax cuts, franking credits, negatively geared investment property and the Anglo-Saxon self-reliance that had made the country great.

It was another salvo in the culture wars, with a dash of Trumpism and a Prime Minister who might just believe his own PR.

Mr Morrison’s apocryphal bacon and eggs rugby analogy got the biggest laugh, at the expense of his Ministers, so why not mash it up even more and remind public servants that it doesn’t matter how committed a bit of pork is, or how much lipstick you use, if it’s not in the public interest, it’s still just a pig.

It’s hard to see what all the fuss is about. To me Morrison’s message was that, in supporting the Government in implementing its policy agenda, the public service needed to be creative, “think outside the square” etc. I didn’t see him forbidding the public service from providing frank and fearless advice. He merely seemed to be saying that, if that advice was against the Government’s preferred approach and was not accepted, the job of the public service was to provide the highest calibre possible of advice and support in implementing the Government’s preferred approach. I was a public servant for many years and I can tell you it has always been thus. The sheer hysteria that’s accompanied Morrison’s “statement of the bleeding obvious” is all too typical of Canberra’s one-eyed lefty culture. Get over yourselves.

Aside from its knowing and amusing observations of bureaucracy, politics, and the relentless spin machine, Utopia is also a reminder of the steady encroachment of the federal government into areas which are (or used to be) the primary responsibility of state/territory and even local governments.

If Morrison’s conservatism was anything like as severe as it is portrayed, doing something serious about that would be high on his agenda – with very obvious consequences for Canberra. Far more likely though, pragmatism will prevail and things will go on pretty much as they always have – even if the bedside manner (so to speak) isn’t quite what some would hope for.

I think that Australia missed the memo informing them that they have essentially, a religous marketing exec as their PM. Like all marketeers, he likes to speak in generalities and slogans, distilling every idea to a dreary piece of advertising. Thus, ‘Middle Australia’ is born. I am middle Australian myself ,friends of middle Australians and none of us has the same outlook as ScoMo. He needs to see himself as the outlier he is, a happy clappy member of Hillsong, he believes underneath his marketing façade, that Jesus will ride down in a chariot and save us all from climate change and every other evil. Imagine the outcry if someone as religious from another religion was elected? He is a very conservative man who tries to hide it. Frankly, I’d rather Tony Abbott, at least he let his freak flag fly publically.

One wonders, what is Bad Scotty’s first language? Certainly not English.

Shame pur governmentvlacks trust in the Public Service. Every time there is a problem, instead of calling in rhe Secretary of the relavent Department, they call a Royal Commission. Latest example, Aged Care, where the department has not for a variety of reasons been checking on on facilities. Stories started emerging of por standards, dont get the department to fix it, call a royal commission.

Well said. Hey Scott, while you’re at it, maybe make some of your mates that you have literally outsourced the public sector to a little bit more accountable hey? Throwing public money at the private sector no matter what does not, despite what you and your IPA cult believe, create jobs. It simply increases profit for the company – which is what the company had a duty to shareholders to do. Your duty to your shareholders, in this case, the Australian public – is to manage public money effectively for the best possible return on investment, manage our economy taking into account international trends and events, and to ensure Australians have every opportunity to be GAINFULLY employed (20 hours a week spread across 3 different jobs does not cut it). Do your job.