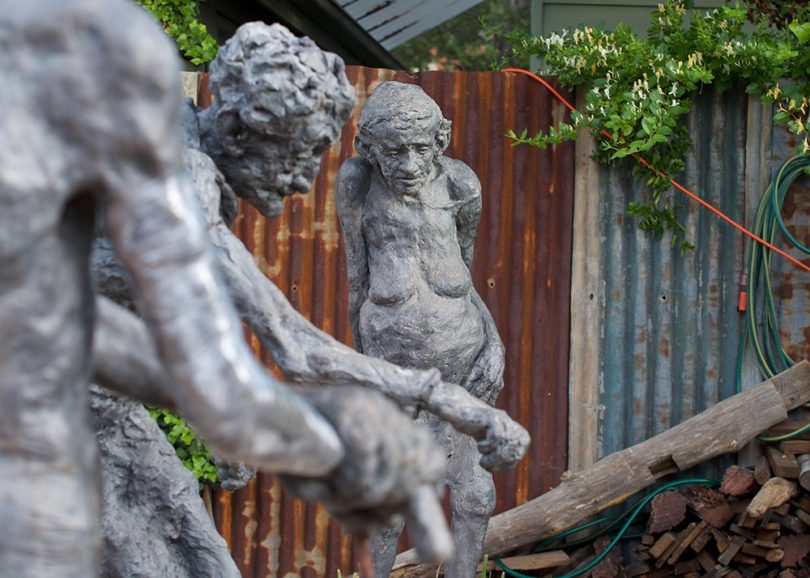 The concrete sculptures are in a bad way after spending years outside. Photo: David Burke.

Queanbeyan locals either love them or loathe them, but several life-size sculptures depicting the effect of age on the human body are set to find new homes across the region.

The sculptures are the work of local artist, activist, agitator, and archivist Connee-Colleen Cameron who died suddenly last year, aged 80.

The sculptures – three made from concrete and one from bronze – were rescued from her home’s front veranda in April 2020 and are now stored at The Hive, a community centre operating out of a yellow, circa-1910s heritage-listed building on Crawford Street.

As part of this year’s Heritage Festival, The Hive is hosting an event on Saturday, 9 April, hoping to raise $4500 in gold coin donations that will go towards restoring the sculptures. 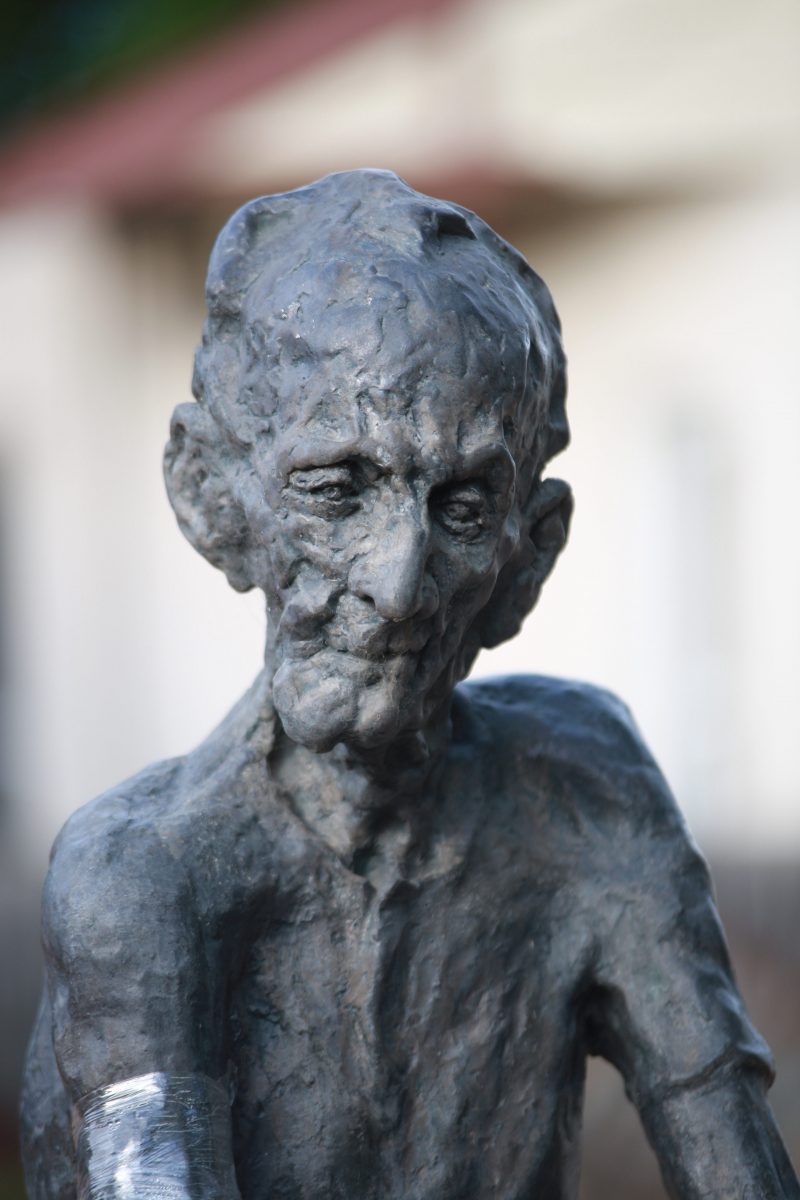 The sculptures are based on real people from George Forbes House, a Queanbeyan nursing home. Photo: David Burke.

Owner of The Hive Helen Ferguson says negotiations with Queanbeyan-Palerang Regional Council (QPRC) on where the sculptures will go after that are still ongoing. Possibilities include inside the new council chambers or outside the Royal Hotel QBN.

“The idea right now is to stop any further deterioration of these characters,” she says.

The sculptures were made in the 1980s, while Connee-Colleen was undertaking a post-graduate degree at the ANU School of Arts. Helen says they are modelled on real-life people from George Forbes House, a nursing home near the Queanbeyan Hospital.

“She has done a number of different busts, but she did these three life-size pieces of people in the last years of their life,” Helen says.

“Some people love them, and some people find them quite scary, because they’re old people and it shows what an old body looks like at 80-something.”

During their time out the front of Connee-Colleen’s house, the sculptures were damaged by several young miscreants who attempted to drag them away – but given the fact they weigh about 80 kilograms each, they never strayed very far.

Helen says the bronze sculpture remains strong and sturdy, but those made from the concrete are covered in fine cracks. One suffered a broken arm.

Connee-Colleen was a “real advocate” for preserving heritage in the region, frequently attending council meetings to prevent historic buildings from being demolished in the wake of new developments, including Rusten House.

“She was a real fighter, but she was also an artist,” Helen says. 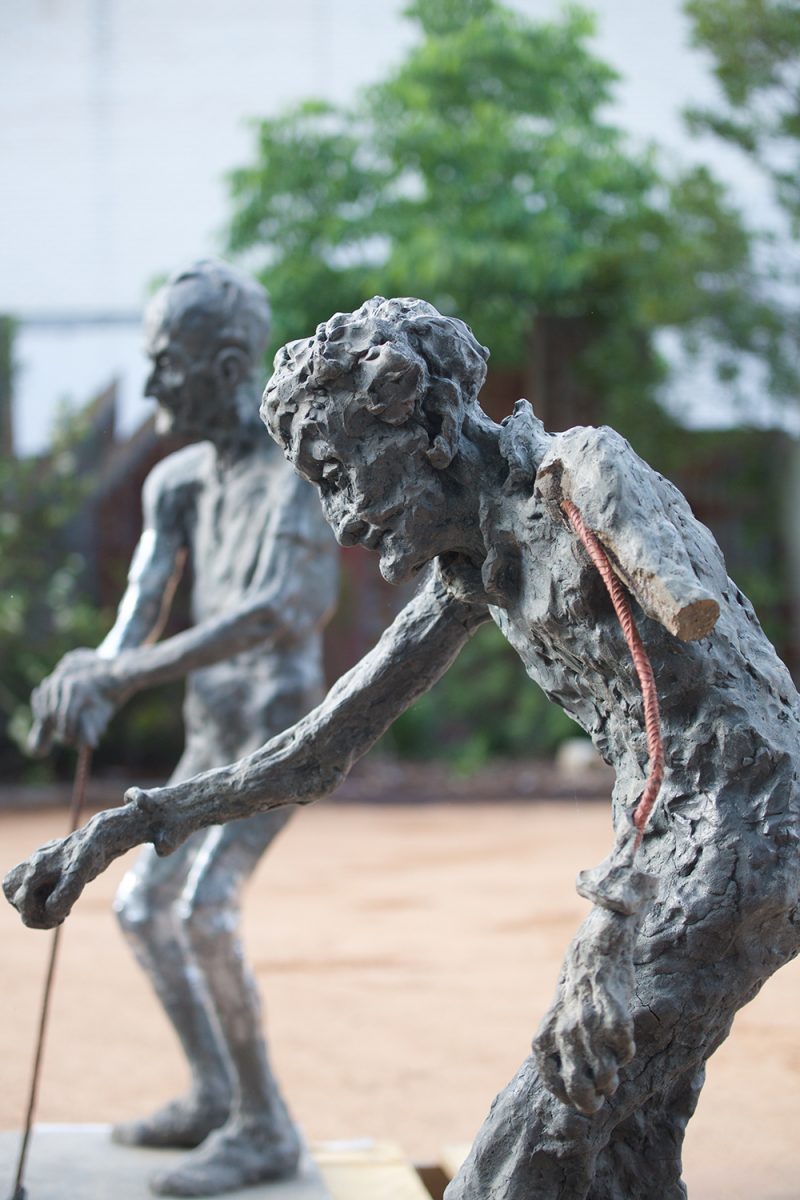 Connee-Colleen created a group called Heritage Arts Promotions Incorporated (HAPI) which, over the years, raised funds for another seven life-size sculptures to be made. Only one of these came to fruition, however, taking the form of John Gale, founder of the Queanbeyan Age and “Father of Canberra”. His statue now stands outside the Queanbeyan Courthouse.

With the help of QPRC, The Hive is currently applying for a $100,000 grant from the NSW Government to go towards bringing a life-size bronze statue of Aboriginal activist and community leader Queen Nellie Hamilton to the Rusten House Arts Centre.

Helen says The Hive initially wanted to run a fundraiser and exhibition crossover two years ago, but COVID-19 had other plans.

“This Heritage Festival will be a great opportunity to keep this project alive,” she says. “It’s our mission to be able to bring communities together through art and history.”

In addition to raising funds, Helen says they hope to come across descendants of the people depicted in the sculptures.

“We’re trying to put more social media notices out there to see what traction we can get with that.”

Heritage in The Hive will be held from 12 to 4 pm on Saturday, 9 April, at the The Hive (274 Crawford Street, Queanbeyan). Bookings are not required and entry is by way of a gold coin donation. People can also donate online.

Connee-Colleen was an amazing artist & an amazing woman. She taught me how to see life as it is & to not be precious about not making mistakes. Mistakes are a part of the learning process (although she would say this in her own unique colourful way!). A suggestion that her sculptures be restored and placed in the gardens of Queanbeyan nursing homes and/or local hospital. I think that would be a beautiful tribute to Connee’s lifetime of work.

Wow they are absolutely brilliant pieces of art…it is a shame they are damaged. The lady was certainly a skilled artist. I wish I had a fraction of her skill.. I do hope they manage to restor them and they are placed somewhere they can be viewed and appreciated as they should be.

I loved seeing Connee-Colleen’s sculptures on her porch as I walked from school to sport and home, such a talent. It would be a shame to lose them, happy to donate to help restore them.