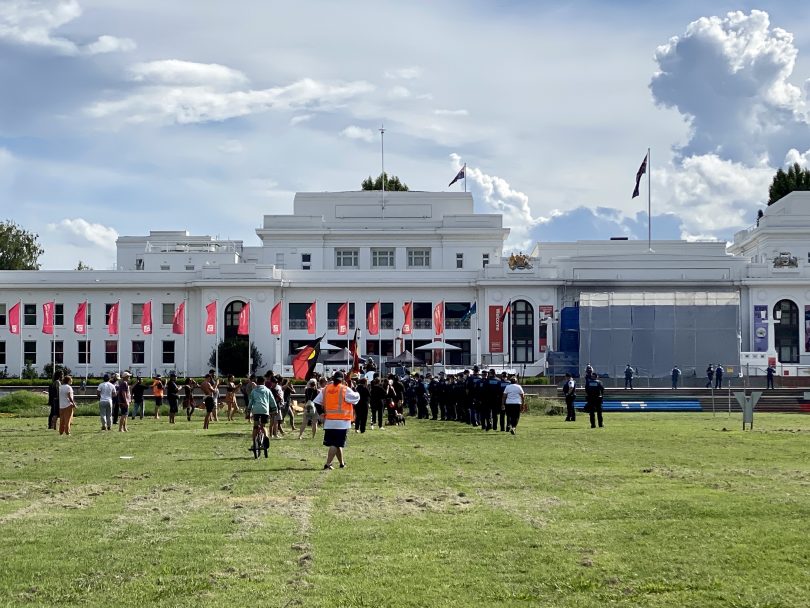 Police and protesters outside Old Parliament House at around 5 pm this afternoon (14 January). Photo: James Coleman.

Protesters from a ‘sovereign citizen’ movement that aligns an anti-vaccination campaign with Aboriginal rights are being moved on from their campsite near the National Rose Gardens.

Footage from the Millions March Against Mandatory Vaccination Australia Facebook page shows police officers dismantling the campsite while being filmed by protesters.

Police say they notified the protesters that they need to move on by this afternoon (14 January) after information surfaced that the group was allegedly planning to storm Old Parliament House tomorrow.

The ACT Police action, supported by additional AFP resources including Specialist Protective Command, followed a request from the National Capital Authority to remove structures and vehicles that are on Commonwealth land without a permit.

There were fears that the group also planned to disrupt the 50th anniversary of the Tent Embassy on 26 January.

This afternoon, roads were blocked at King Edward Terrace near the National Gallery and towards Old Parliament House which houses the Museum of Australian Democracy.

Police asked members of the public to avoid the area if possible after establishing a cordon around the area around 3 pm. 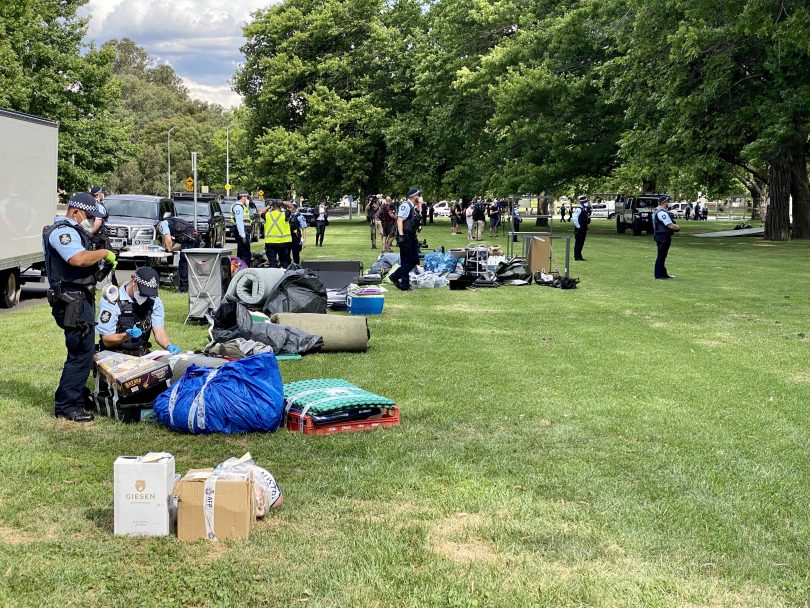 The action has been taken under the 1932 Trespass on Commonwealth Lands Ordinance that enables police, appointed as inspectors for the purposes of the Ordinance, to remove trespassers on national land, including the Parliamentary Triangle.

Under the Ordinance, police may arrest anyone suspected of trespassing who refuses to give their name and address.

Police can be heard on the group’s social media video advising that all camping equipment, tents and vehicles must be moved on by 4 pm.

If the protesters refuse to leave, police may remove their equipment and store it until claimed.

Growing concerns about the group have been voiced by occupants of the Tent Embassy, which has occupied its site adjacent to the building for more than 50 years and has a valid permit to carry on their protest.

Local Aboriginal leaders also say the protest group harassed and intimidated local community members in Queanbeyan this week because they were wearing masks.

“How dare they come to this land and treat Traditional Owners this way. They have no cultural respect. Their traditional Lore is BS if they think that is how you treat mob anywhere,” one comment on Riotact said.

The group’s social media comments include multiple links to anti-vaccination material, references to supposed paedophile rings operating among Australian politicians and business leaders, and allegations that quarantine facilities are concentration camps for the unvaccinated.

On a 5 pm live stream, protesters confronting police could be heard saying, “Film the paedophile protectors”. Occupants at the Tent Embassy are accused of “selling out”, and the rival group can be heard shouting “Shame, shame” at them. Tent Embassy occupants responded by saying, “Learn about sovereignty before you start using it”.

Members of the protest group are alleged to have lit a fire that caused significant damage to Old Parliament House on 30 December. Police have made several arrests in conjunction with this and other incidents since mid-December, when the group set up camp.

Protest leader Bruce Shillingworth Jr faced the ACT Magistrate’s Court this morning. Court documents allege that when another man, who cannot be named, was moving coals from a ceremonial fire, Mr Shillingsworth stood near the building’s doors and appeared to coordinate people to make way for them.

When police attempted to reach the fire at the doors to put it out, protesters blocked their path and Mr Shillingsworth allegedly repeatedly yelled at them to “hold”.

The fire grew to engulf the entire portico and social media footage showed a number of items had been added to fuel it, including sticks, chairs and a couch that had been on the portico.

Well our local paper thing has always been a big supporter of camping in the triangle, so I guess their reporters could put up accommodation for quite a few of them.

i think everyone has been patient enough with them. Im glad the NCA has finally moved them on.

So, the police are finally going to remove protesters from the lawns of Old Parliament House.

As we are supposed to apply the law equally to all citizens in this country, I’m assuming this means all protesters in that location right?

It is about time! 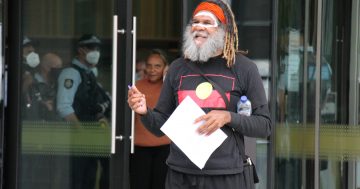 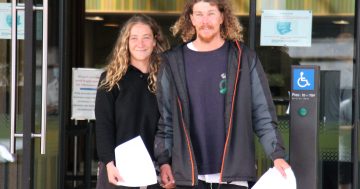