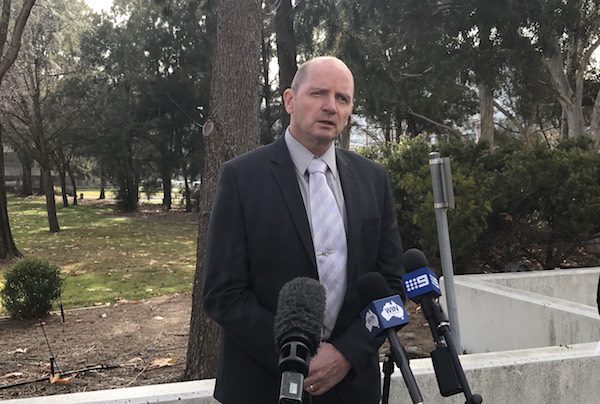 ACT Policing Criminal Investigations detectives hope witnesses will be able to help them to identify a man who has indecently assaulted three women around Yerrabi Ponds at Gungahlin in separate incidents this month.

Criminal Investigations Detective Superintendent Ben Cartwright (pictured above) said other victims in the community who have yet to come forward may be among these witnesses.

“We do feel that this person may have approached others out there and they just may not have thought that it was worthwhile reporting those incidents to the police,” Superintendent Cartwright said.

“It certainly is and we’re keen to talk to those people.”

Superintendent Cartwright has also called on the man to turn himself in to police.

“Please come to the police station and talk to us rather than us have to come and look for you,” he said.

There will be a higher police presence in Yerrabi Pond while the investigation is underway, with police patrols specifically targeting the area.

“We want people to feel safe, we just want to talk to this young man and stop these incidents,” Superintendent Cartwright said.

The women who have contacted police so far to report the attacks have described their assailant as caucasian man in his late teens to twenties, with a European accent, possibly French, a slim to medium build and untidy hair that reaches down around his face to his chin. They believe he was wearing a dark coloured hooded top with pockets at the front near the waist and dark blue jeans at the time of the offences, and riding on an old mountain bike. The man has been seen variously wearing a black beanie, a red helmet and the hoodie over his head.

The first incident occurred at around 6pm on Thursday, June 1, 2017. A man fitting the description above approached a 17-year-old female walking along the pedestrian path adjacent to Mirrabei Drive and indecently assaulted her.

The second incident occurred on Monday, June 5, 2017 where a man fitting that same description passed a woman near the East Island walkway bridge and indecently assaulted her.

The third incident occurred on that same Monday. In this case, the man approached a woman who was jogging along the pedestrian path adjacent to Mirrabei Drive and asked an inappropriate question.

None of the incidents were violent, but all were indecent, unwanted, uncalled for and inappropriate, according to ACT Policing.

“It’s not what we want in our community,” Detective Superintendent Cartwright said.

“People have the right to feel safe … Yerrabi Pond is a place where people spend a lot of recreation, and they should be able to do safely.”

Superintendent Cartwright said detectives were comparing the Yerrabi Ponds assaults with previous cases to assess whether there may be a connection, but at this stage they had no specific suspect in mind.

“We’re backtracking through some incidents to see whether there’s been anything else that should’ve come to our attention or is on our records,” he said.

“It’s a possibility that he’s been around for a fair while, but it’s certainly only over the past month or so that things have ramped up, so we’re ramping things up as well.”

Police are urging anyone that can assist in identify the man to contact Crime Stoppers on 1800 333 000. Information can also be provided online via the Crime Stoppers website.

Kalo Arepo - 14 hours ago
Were they trying to jump the queue? View
Smackbang - 22 hours ago
How about you stop passing judgement on someone you know precisely nothing about? View
Community 15