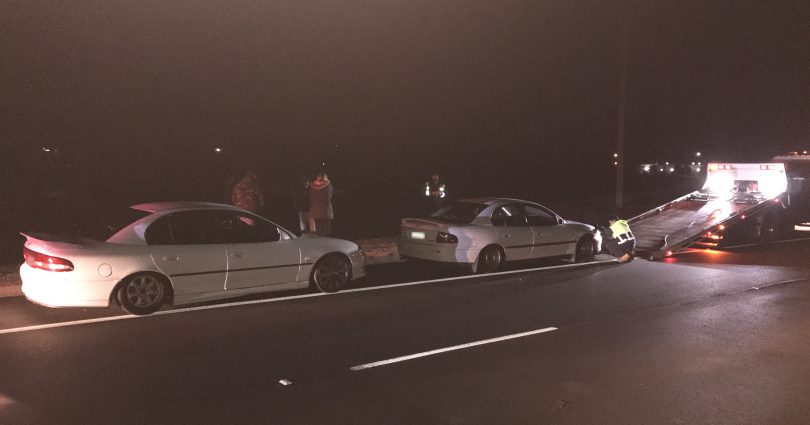 Police seized both vehicles for a period of up to 90 days for street racing. Photo: Supplied by ACT Policing.

Around 8 pm, police detected two cars travelling side by side at 180 kilometres per hour in an 80km/h speed zone on Gungahlin Drive, Franklin.

Police stopped the vehicles on Gungahlin Drive near Oodgeroo Avenue at which point both drivers admitted they were racing each other. Police seized both vehicles for a period of up to 90 days for street racing.

The drivers will also be summonsed to the ACT Magistrates Court for driving at a dangerous speed, exceeding the speed limit by greater than 45km/h and street racing.

Officer in Charge of Traffic Operations, Detective Acting Station Sergeant Marcus Boorman said police have the power to seize vehicles for speed-related incidents such as burnouts, failing to stop for police or street racing.

“The streets aren’t for racing and anybody who thinks otherwise will be targeted by police,” Detective Acting Station Sergeant Boorman said.

“I’m sure all Canberrans are happy that these drivers no longer have their vehicles and will be held responsible for their actions in court.

“If a collision had occurred the outcome would have been catastrophic. They could have easily killed themselves, their passengers or somebody just going about their business.

“Their actions were totally irresponsible and they had no consideration for other road users.”

Ol L - 16 hours ago
Maybe if we do nothing another government will be in power when it all blows up, so let’s do nothing in the meantime View
Ashley Wright - 17 hours ago
Sally Greenaway found the article. https://www.cityservices.act.gov.au/roads-and-paths/traffic/trafficsignals/drakeford_drive... View
Ashley Wright - 17 hours ago
Sally Greenaway as I said above they actually do that and have done so for a good 30 years. They use a system called SCATs th... View
show more show less
*Results are based on activity within last 7 days

@The_RiotACT @The_RiotACT
The Sydney and Melbourne Buildings are more than historical landmarks, their tenants show how Canberra has evolved over almost a century - and you might be surprised to learn which businesses have survived longest https://t.co/9AdsDBtuTd (17 minutes ago)

@The_RiotACT @The_RiotACT
In the mood for a day of retail therapy in the country? Head out to discover some of the hidden treasures in Yass https://t.co/DXt7Og0028 (12 hours ago)