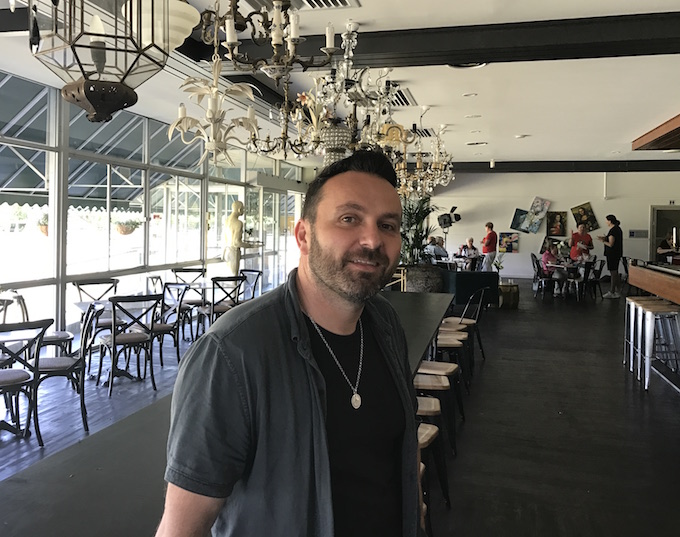 As far as several hundred RiotACT readers are concerned, Braddon Bowls Club developer Nik Bulum should forget about the idea of turning the site into townhouses or aged care accommodation and get on with transforming it into a mixed use offering along the lines of The Grounds of Alexandria (pictured below). 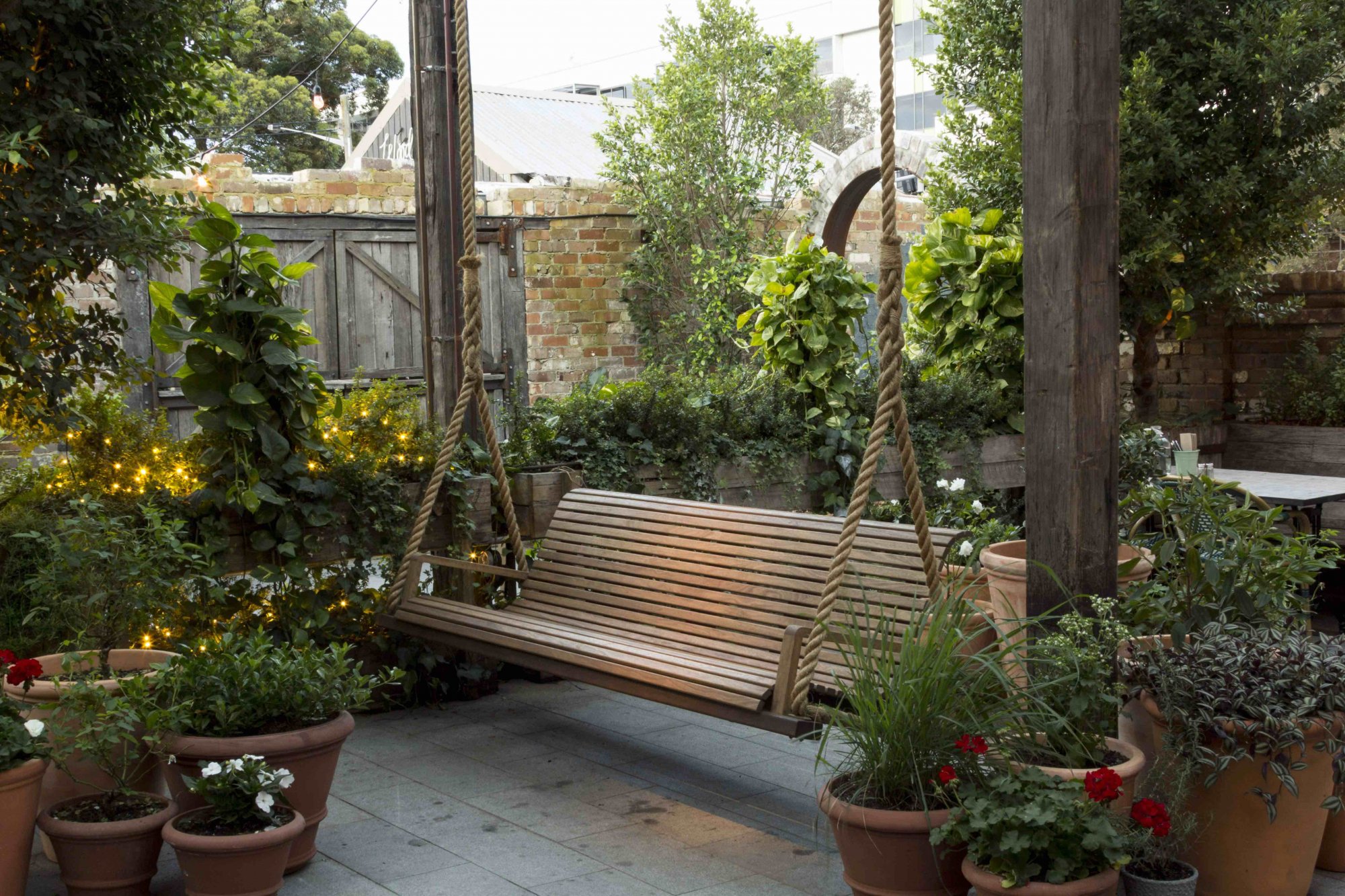 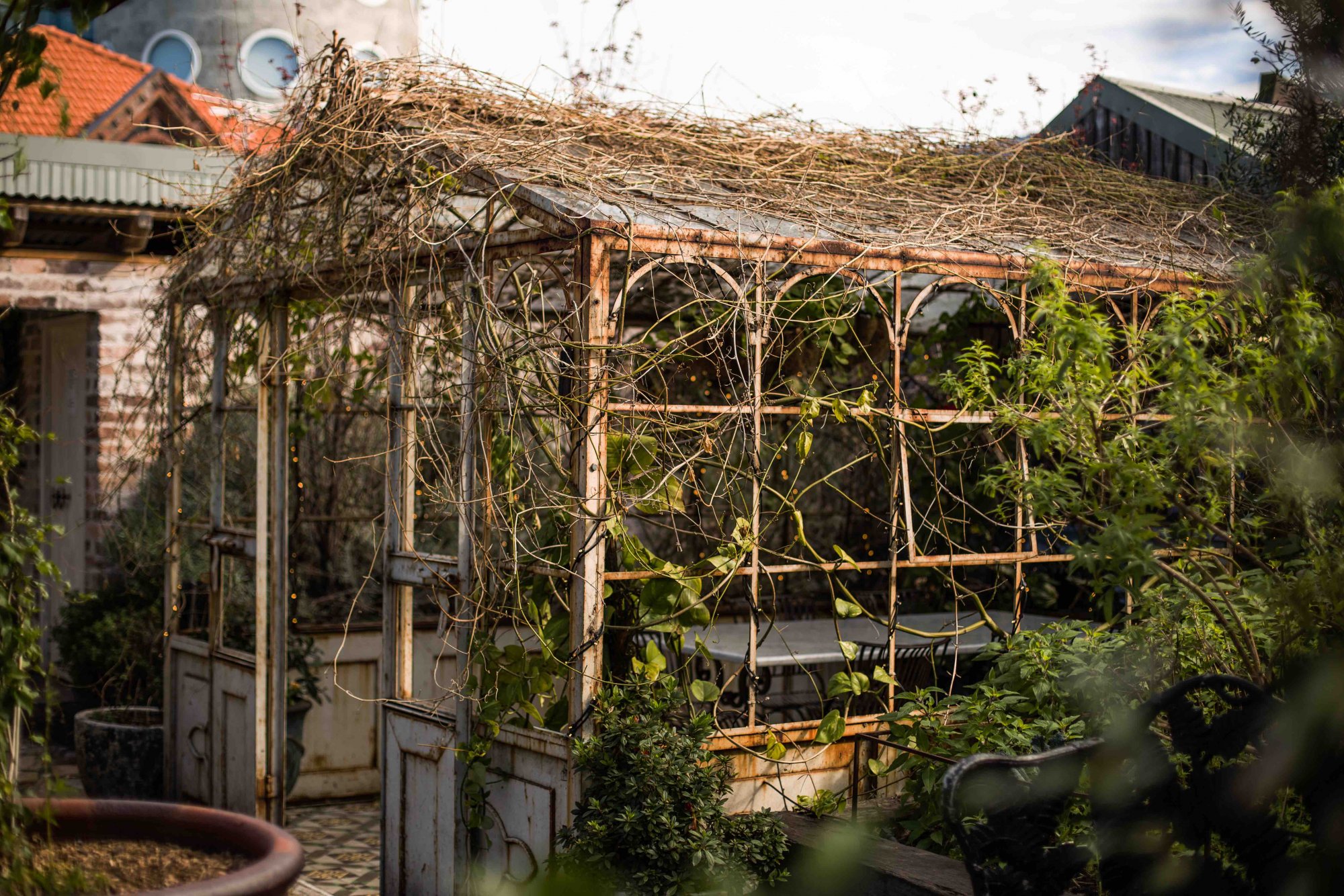 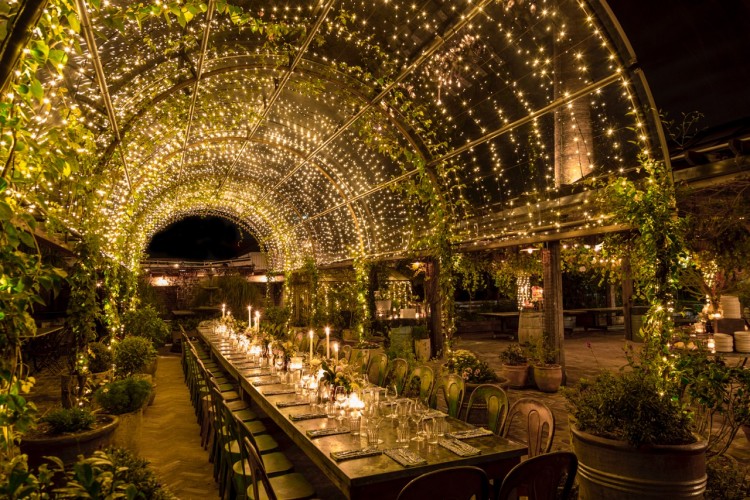 We ran a poll on the issue just before Christmas, and when we last checked, nearly 900 of you had voted, with 94% choosing the mixed use option to 3% each for retirement village and townhouses. 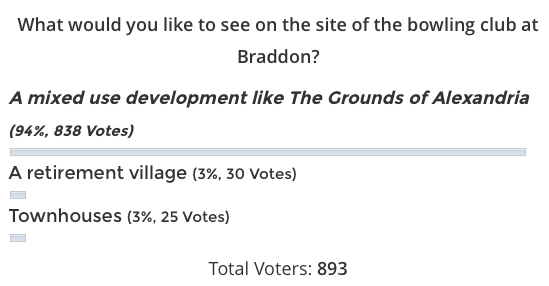 We reckon the poll and comment system on the RiotACT has great potential as a way to canvas views of the broader Canberra community on issues such as this and look forward to asking for your thoughts on further proposals as the year goes on.

The next most clicked on polls over the holiday period were on dedicated bikes paths, NIMBYs and Westside.

Most of you (41%) felt Westside’s shipping containers would be viable in a new home, though those who felt it was a terrible concept the city was well rid of weren’t far behind (39%). 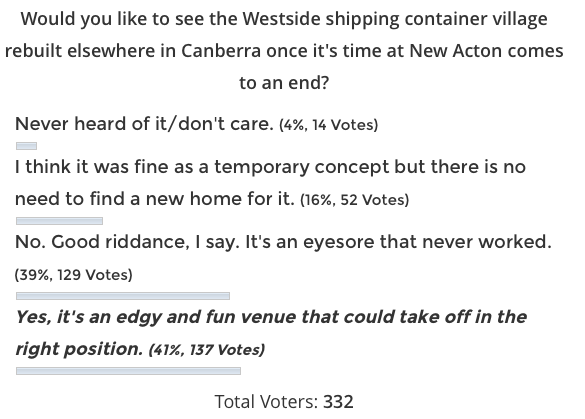 As for the Not In My Back Yard types, most of us (41%) took the position that it would be wrong to consider all of those who protest about development in their local area as anti-progressive. However, 37% of you felt NIMBYs should allow the city to grow instead of objecting to progressive change. Just under a quarter (23%) were pro-NIMBYs, seeing them as concerned citizens care about green space and aesthetically pleasing architecture. 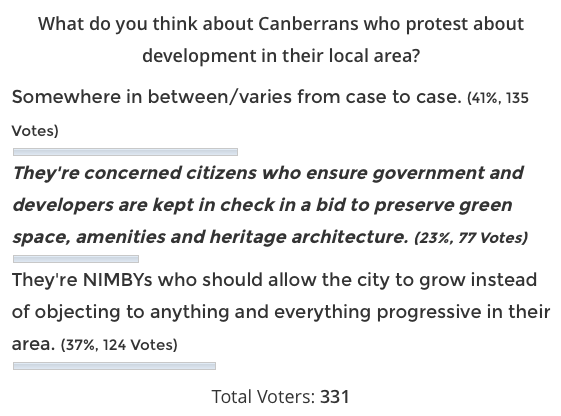 On the dedicated bike paths question, a clear majority at 69% were keen to see more separated structure for bike riders in the ACT. 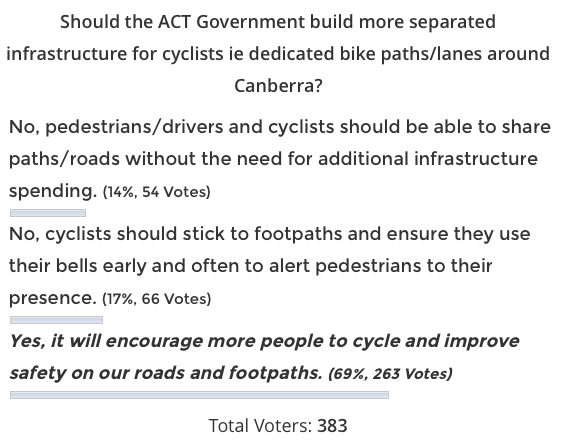 Other recent polls have examined apartment living, childcare, the standard of driving on the Kings Highway.

Asked whether they’d give up their car to live in an apartment on the light rail line, a clear majority at 40% of readers voted that living in an apartment would depress them as they need their own space and a garden. However, around a quarter of those polled liked the idea given the potential savings on car running costs. Around a quarter needed a car to drive children around with another quarter needing a car for work. 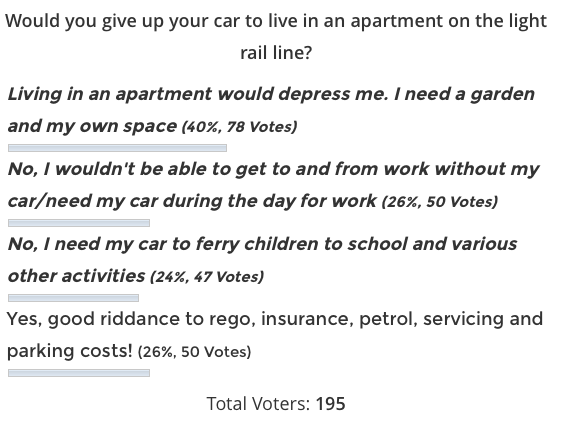 When it comes to childcare, the vast majority of you (76%) value the expertise of carers under the current National Quality Framework, but 24% would be happy to have less qualified carers in order to save on fees. 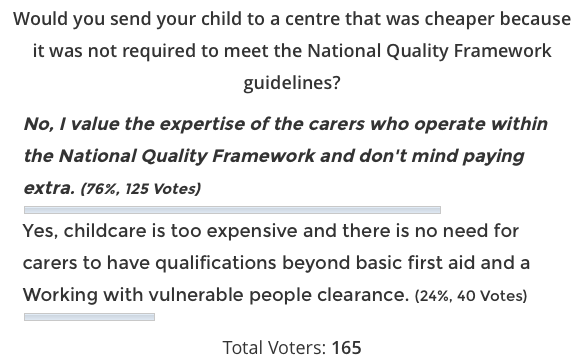 We offered up five suggestions for ways to prevent road fatalities on the Kings Highway, and the most popular of them (40%) was that ACT Policing should provide additional traffic police to NSW during the holiday period. Only 21% were for a toll road under the Clyde Mountain, but 31% were keen on the idea of the police issuing dashcams to drivers and running a dob-in-a-dangerous driver campaign. 28% would like to see instant licence suspension for offenders replace the double demerits system. Only 12% felt felt speeding or drink drivers should be banned from the coast road for five years. 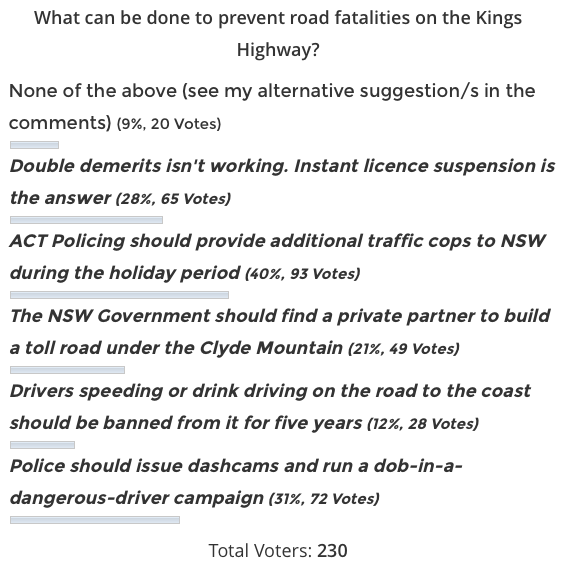 Finally for this week, most RiotACT readers agree with the Raiders’ decision to ditch game day cheerleaders, with 63% believing the move will make Raiders games more appealing for women and children and 37% disagreeing, saying they enjoyed the colour and atmosphere the Emeralds brought to matches.

You can see our current poll on the right hand of the home page each day. Look out for new polls in the text area of opinion pieces and news stories through the week. Current polls awaiting your vote examine a six-storey development proposed for Curtin and the question of opt-out vs opt-in organ donation.

You are absolutely right Paul. I’ve been to The Grounds in Alexandria. It is a great destination but it is indeed in an industrial area completely different to the quiet suburban Residential Zone 1 (RZ1) area in Braddon.

re Grounds of Alexandria. The comparison between it and a possible similar facility in Braddon may have been misleading. Grounds is located in an industrial estate – which is a bit different to thinking about establishing similar in the middle of a quiet residential area.

I have said elsewhere about online surveys – they are useful but caution needs to apply if anyone intends to use them to inform planning. They are not reliable for that purpose.

Planning for residential areas (such in Braddon) requires formal engagement by an independent agency that may/may not include surveys as part of their tools for documenting feedback and aspirations.

Then the survey question require balance – for instance how many local residents recognise that changes to the Braddon Bowls are to happen but want those changes to be on the scale of the present bowling club – and not upscaled to something much larger (noisy etc)?

And then there is the online survey mechanism itself. Any online survey relying on recognizing the IP of the voter can be manipulated. I have seen a demonstration whereby 1,000 votes were lodged to survey within about an hour by the one person–getting around the IP block. Easy when you know how.

And then there are the survey trees – whereby particular groups get their friends to respond. Easy when you know how and have done it before (they have in Canberra).

All surveys give information (good) but they do not necessarily represent the views of the people most effected (nearby residents).

Denise Bourke - 5 hours ago
More dodgy research on this eh? Like the research on having weed in family backyards? Kids form addictions without parental c... View
Iain Somerville - 10 hours ago
This is not just about the right to choose to die. It is also about Canberrans being classed as lessen citizens by being deni... View
David Newman - 11 hours ago
Linda, exactly. It’s as if the ACT’s and NT’s residents have a lesser right to self determination than residents of the... View
Lifestyle 8

kenbehrens - 8 hours ago
Government charges contribute towards the high cost of rent in Canberra. It's Government policy to increase Rates, to a level... View
Geoffrey Bell - 11 hours ago
Mandy Truman $206 cheapest share place i could find. https://www.allhomes.com.au/share/search?region=canberra-act&district=gr... View
Mandy Truman - 11 hours ago
I'm full time uni and I got made redundant from my job and then got a casual job but haven't had work for 10 weeks. I would h... View
News 246