Pommy Bastard asks – what bug is that? 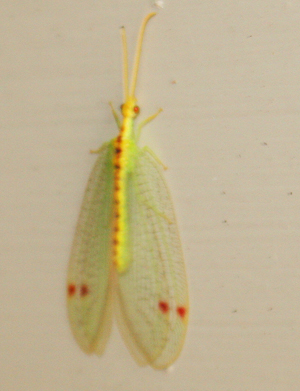 Pommy Bastard has braved the wrath of a certain commenter with strong views on photography to ask a question of you all about the pictured insect:

“Could you please post at the RiotAct the accompanying image of a weird assed bug, shot on my porch yesterday morning, and ask if we have any lepidopterist members who may kindly be able to identify it for me?

It’s a poor quality shot, I rushed it, as I wanted to capture the image before it flew away. Which it subsequently did!”

17 Responses to Pommy Bastard asks – what bug is that?
Filter
Showing only Website comments

Try eating one, PB and report back.

Are they good to eat?

Actually my good pommy friend, that is a drop bear.

Lepidopterist was close, they specialise in butterflies and moths.

You’d be looking for an entomologist, whose specialty is insects.

Bugologist is just way off. 😛

Judging by its eyes, I think it found a wacky tobaccy plantation.

Excellent, my curiosity is assuaged. Lacewing moth is close enough for me.

It was a rather beautiful creature, and one is blessed by close encounters with such beauty.

My thanks to all.

Lacewing. Someone has a fetsy pond and a few fruit trees nearby.

> image of a weird assed bug

Is that a bug that’s next to a strange donkey???

Yeah, I’m no bugologist, but I’ve seen these things around Canberra for as long as I can remember, and have always heard them referred to as lacewings. I have an unreliable memory that referring to them as ‘lacewing moths’ is something akin to referring to ‘koala bears’.

You should treat them well they eat aphid and mealybugs and things.

They are a gardener’s friend.

Oh boy. Dexi is going to LOVE this one. he might point out that one engages macro when shooting insects (waits expectantly).

That’s quite a good insect though, blowed if I know what it is, there’s been some odd things around lately that I’ve never seen before.

I saw a Bogong moth last night! Has anyone claimed first sighting of the season in the Canberra Times yet?

I can’nt help myself. You have blured the photo of the bug in my A##. Its called the poor taste bug.

Looks suspiciously like a fishing lure or a kids toy.

Trick question? Is that a fishing lure?

Vanessa Schultz - 5 hours ago
Too young, and always a happy football mad kid, I grew up across the road in Hopetoun Circuit Yarralumla from the McInnes RIP View
Carol Jean - 14 hours ago
So sad, a true gentleman View
Stephen Keir - 17 hours ago
Sad news Always polite and genuine. View
Opinion 48

James Dof - 12 hours ago
I take the bus to get to the bus terminal with luggage and like I said it's 45 mins to civic and an hour less travel on the b... View
Julie Macklin - 13 hours ago
James Dof A bus every 15 minutes from Civic. In practice thought I imagine most people, even if there is a regular bus from w... View
James Dof - 16 hours ago
For me to catch a bus from Macquarie to Kingston it would be an hour and a half and an hour slower slower on the train than t... View
Food & Wine 135

Police are looking for a man and a woman after a shooting at a home in Dunlop on Saturday night (30...
Sport 6

Only injury prevented Mark McInnes, a towering back-rower, from playing for the Wallabies. The man known to all and sundry...
Business 12

@The_RiotACT @The_RiotACT
The Raiders marked Josh Papalii's 200th game with the Green Machine with a 22-6 win over the Storm in Melbourne. It's the Raider's best season start in 15 years and already has fans dreaming that Ricky's men can go one better in 2020 https://t.co/v64nqFaA2Q (1 hour ago)

@The_RiotACT @The_RiotACT
While we can't gather together to mark Reconciliation Day, there are plenty of ways to start conversations and reflect on reconciliation as a community https://t.co/MZqyHdBf2V (2 hours ago)

@The_RiotACT @The_RiotACT
The launch last week of the ACT Government's Age-Friendly City Plan has come at a crucial time for Canberra's senior citizens, with the COVID-19 crisis highlighting issues that many in the national capital refuse to acknowledge, says Ian Bushnell https://t.co/Cudpndvc2c (5 hours ago)