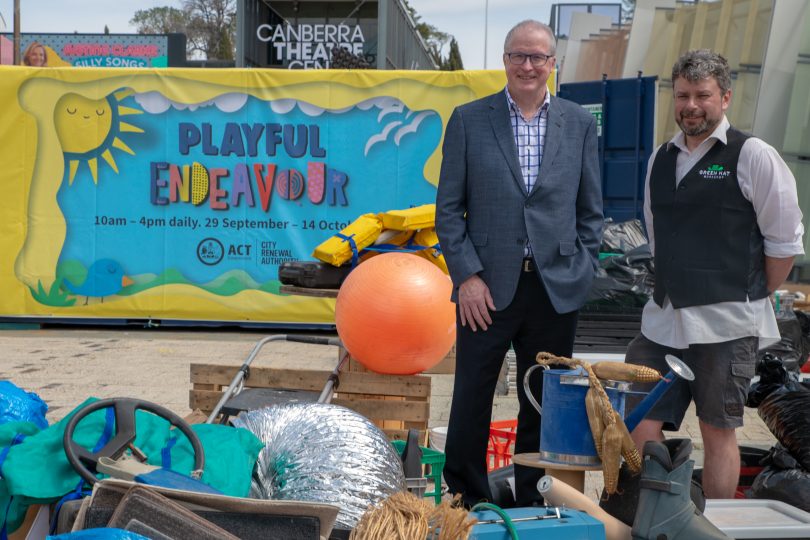 The pop-up play space called Playful Endeavour was designed to foster the creativity and imagination of children. Photo: Supplied

Over the school holidays, Civic Square will be littered with hoops, poles, pipes, crates, ropes and tyres as an untraditional playground takes over the normally sparse location.

Each day from 10 am to 4 pm, the public space in front of the Canberra Theatre will be filled with a collection of found and manufactured materials selected to encourage creative play and social interaction.

“Playful Endeavour is not your traditional playground,” Mr Snow said. “Instead of swings and slides, you are more likely to see hoops, poles, pipes, crates, ropes and tyres.

“Civic needs to be a place that is welcoming and exciting for a wide variety of people, and giving children something fun to do that also stimulates their minds is part of what makes a great city centre.”

Mr Snow believes if there are to be more families living near the city centre then space needs to be made that welcomes children.

“Temporary activations like Playful Endeavour, combined with more permanent installations, help us create a child and family-friendly environment,” he said.

Playful Endeavour is being operated by Green Hat Workshop, which hosts loose-parts playgrounds around the country. Education and operation manager Cam Lee said the loose-parts creative playground has many benefits for children.

“The self-directed nature of loose-parts play engages all ages and abilities and complements the traditionally fixed play equipment and sports equipment that most Australian children already have access to.”

Playful Endeavour will run from 10 am-4 pm in Civic Square from Saturday 29 September until Sunday 14 October to coincide with the school holiday period.

To accompany the temporary playground, Canberra Museum and Gallery will be holding two special screenings of adventure play documentary The Land, on 4 and 7 October.

Disgraceful waste of cash. More funds poured down the drain for Barr’s dystopian ultra high density city state, as real parks where real people live are neglected and rundown.
Kids don’t need a week-long hipster play space with milk crates and pallets and car rims. We need proper parks every other week of the year, with working toilets, no IV drug needles, and functional play equipment.

It didn’t used to be sooo hard to get right.

@the_riotact @The_RiotACT
Did you hear about the bloke who was bitten by a #white-tail spider and doctors had to amputate his leg? It probably didn't happen, but the #spider's fearsome reputation persists without a shred of evidence. Damien Larkins explains https://t.co/5I2pJBKyzw (43 minutes ago)