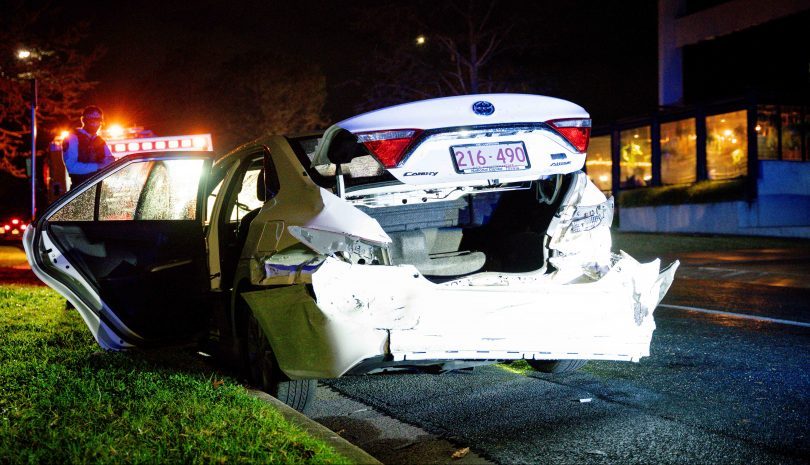 A detainee being taken to hospital allegedly escaped in July after the transport vehicle was rammed by a Jeep. Photo: ACT Policing.

“Correctional officers cannot keep functioning in an environment of dealing with and being exposed to critical incidents and within hours returning to normal routine,” an email chastising the management within ACT Correctional Services reads.

The email, addressed to Commissioner Ray Johnson and copying in Deputy Commissioner Custodial Operations Corinne Justason and obtained under Freedom of Information, reveals the extent of frustrations from officers that the prison’s management is not taking safety concerns seriously.

It was sent on 10 July, the day after a car transporting a detainee to hospital was repeatedly rammed by a Jeep.

The email chain reveals that the author asked the Deputy Commissioner for “altered escort protocols” for another medical escort that was due to leave at 7:30 pm, just hours after the transport vehicle was rammed and severely damaged.

The email to the Commissioner said the requests were refused on the basis that a risk assessment had not justified any changes.

“I believe it was blatantly clear that the risk levels had increased for staff doing escorts … if only from a staff welfare perspective, let alone the remote possibility of a repeat incident,” the email said.

“The irony of last night’s risk assessment not indicating a higher risk was lost on the Deputy Commissioner when I highlighted that the risk assessment for the escaped detainee had proven ineffective.”

The rejection for new protocols also followed an incident on 23 June in which – according to the emails – officers were required to use force in the back of an unsecured vehicle transporting detainees back to prison from the Canberra Hospital.

Both incidents caused the email’s author to question transporting detainees in unsecured vehicles – like a Toyota Camry – noting that all prisoners used to be transferred in secure vehicles unless they were classified as ‘at risk’.

Questions were then raised about how risk assessments and protocols for restraining detainees in public spaces could better protect and support prison officers.

The prison’s management responded that any review of current policy would need to go to a committee.

An email sent to staff from Commissioner Johnson the day after the 9 July escape said the incident would “prompt us to have a close look at our escort processes to see what lessons there are and to ensure such escorts are as safe as we can make them”.

Prison staff passed a unanimous motion of no confidence in Deputy Commissioner Justason following the escape.

I love ACT directorates – executives on five year contracts manage up and forget to manage down.

It’s only a prisoner. It’s only prison staff. Go use the Camry whilst I tell the Minster how well I’m doing.

My kid plays “Prison Simulator” in RoBlox – and they have guns and there are raids all the time.

It really does highlite how exciting the life of a prison guard actually is.

I wonder if that is actually used as a tool my the prison management to do training and education. Because they certainly don’t seem to be using anything professional for their management.

SNAFU. This regime has shown they can’t operate the prison, so now it’s time they get a private operator.

This would effectively half empty the place rapidly and there would be diminished incentive to return.

It would also save the ratepayers a lot of money. Go for it.

We need a huge improvement to the operation of the AMC, so if not by a private operator, then how will it be achieved?