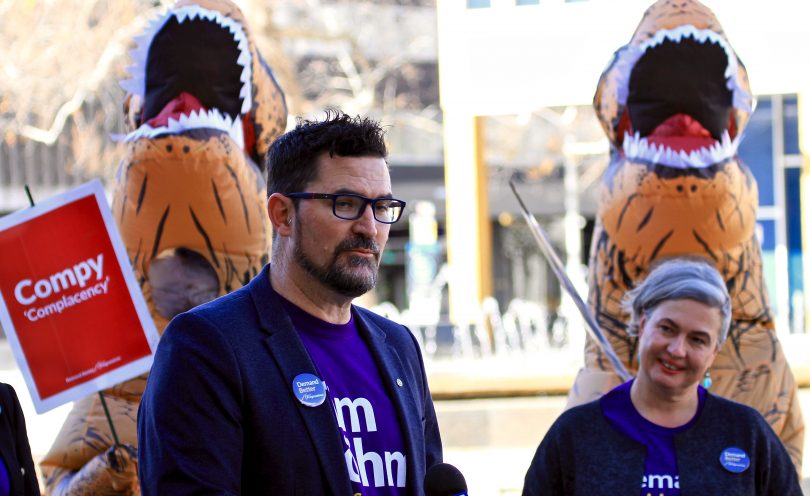 Candidate for the seat of Kurrajong Tim Böhm is no stranger to elections in the ACT, with Peta Swarbrick. Photos: Michael Weaver.

A couple of dinosaurs were spotted in Civic on Wednesday but they didn’t have a lot to say.

The dinosaurs were inflated props for the launch of a political party that lauds itself as being progressive ahead of the ACT election on 17 October. There were the usual spiel about visions, new ideas and tired government, but the Canberra Progressives were tight-lipped on policy and preference deals during the launch.

Canberra Progressives president Douglas Maclaine-Cross said after a year most would likely choose to forget, he marked the launch as a day to be excited about the future.

“We’ll admit politics can be a difficult thing to be excited about, or interested in when our world has been turned on its head,” Mr Maclaine-Cross said.

“From climate change and massive bush fires, through to the increasing pressures on household budgets and the oppressive blanket of COVID-19, it’s not like a local election is high on people’s agenda.

“But it is exactly for reasons like this and more that we need a party built on a solid foundation of ethics, evidence and empowerment.” 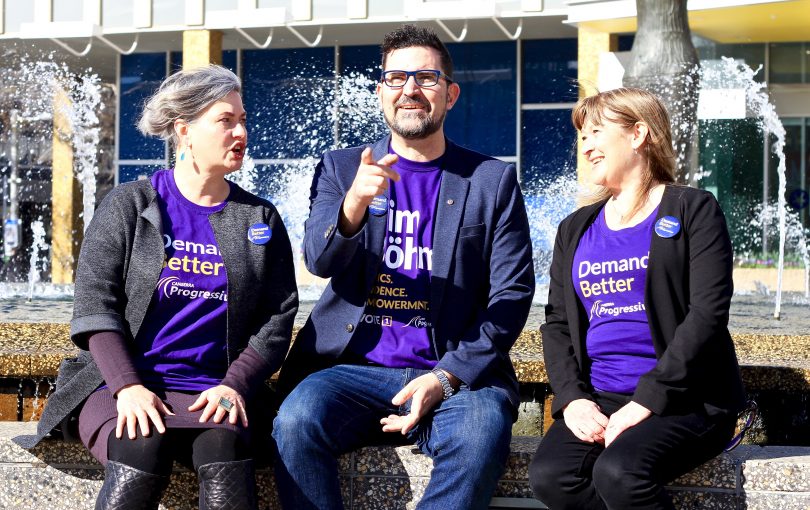 Candidates for the seat of Kurrajong: Peta Swarbrick, Tim Böhm and Therese Faulkner.

Australian Progressives national president Robert Knight is also a candidate for the seat of Murrumbidgee. He spoke familiar phrases that are far from extinct in politics.

“The Canberra Progressives bring a fresh and forward-thinking perspective to the future of Canberra,” he said. “Yes, we care about development, and yes we care about the environment. But our approach is centred around people, livelihoods and community.”

Mr Knight said the dinosaurs are a metaphor for the current ACT Government.

“The dinosaurs have had their time. It’s time to move them into the museum where they belong now.

“We’d like you to meet our dinosaurs Compy and Vesty – short for ‘complacency’ and ‘vested interests’. We’re keen to kick these out of the Legislative Assembly. ACT voters can help us by voting for Progressives candidates in the election on 17 October.”

Asked what makes the Progressives different from the other major parties, Mr Knight said the party is not bound by ideology or vested interests.

“If you look at the membership of the two major parties, there is stagnant support at best, so you see a desire and an atmosphere for real change.” 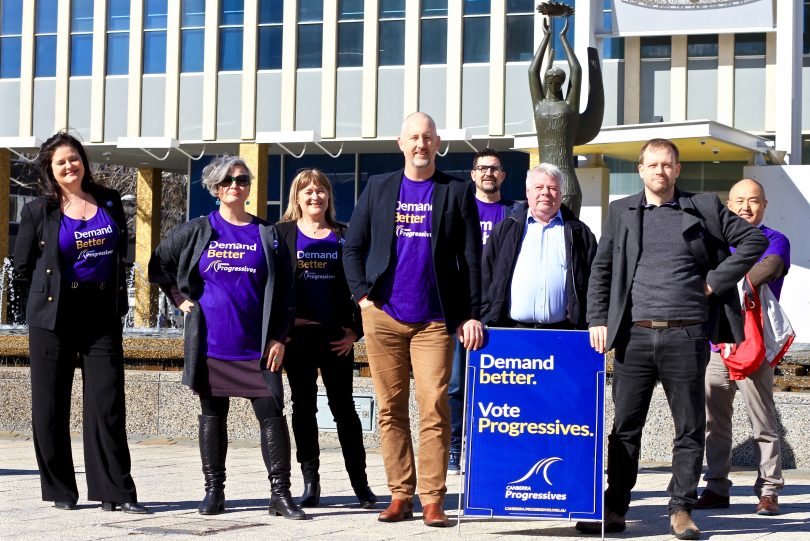 The candidates from the Canberra Progressives at the party’s launch in Civic yesterday (15 July).

Three members of the party will contest the seat of Kurrajong, including Tim Böhm, who has contested previous elections with the Bullet Train Party and recently as an independent at the 2019 Federal election.

President of Canberra Women in Business and award-winning Barbershop chorus member Peta Swarbrick will also contest Kurrajong with Therese Faulkner, who is a former president of the Canberra International Film Festival, a soccer-playing grandmother and winner of TV quiz shows.

Other candidates include Bethany Williams and Mike Stelzig in the seat of Yerrabi and Stephen Lin and Robert Knight, who will contest the seat of Murrumbidgee.

Mr Knight admitted their chances are slim, but ruled out any preference deals the seven candidates will make with sitting members of the Legislative Assembly at this stage.

“It’s a question we will send out to our members and also the community where we’ll talk to them about where they see our best interests.

“We have a full policy suite on our website but we will have some headline policies that we’ll announce as the campaign unfolds,” he said.

Whilst I don’t think I’ll be voting for them, it’s good to see more independents running in the ACT election, when we are crying out for some new blood.

The major parties need a serious shakeup and that won’t happen until the rusted on partisans realise they don’t have to blindly follow one party.

Good luck to this new party.

From this page – https://canberra.progressives.org.au/government – we have –

De-coding of that (i.e. is it something more than selling off/corporatising public assets to reduce commercial rates – presumably for a period?), and an explanation of why there needs to be a reduced reliance on commercial rates, but not residential rates, would be interesting.

He’d have a better influence on ACT elections if he instead tried to get people un-elected… maybe run a #BootBarr campaign, where ALP voters vote ALP but put Barr last, all the other independents take a reality check and instead run in other seats and not confuse the Kurrajong vote, and everyone else just vote Greens or Libs. Imagine no more Barr!

I don’t like this stranglehold the majors have on the ACT any more than anyone else, but having Barr as Chief Minister AAAANNNNDDD Treasurer AAAANNNNNDDDD Minister for Economic Development (ie, land rates and release) has been more than too much for more than too long.

The biggest issues with the Chief Minister and Treasurer and Economic Development all under one minister is not that there is only one Minister, but that they’ve also merged together all those elements into one department…..

Hence Treasury has no claws to say no, and the stupid ideas that come from those other two places are ‘green flagged’ through because the Minister is one and the same….

Hi A_Cog, you’re right. The ACT does poorly in health. Alone the Spire hospital only has one-third of the beds required as suggested 10 years ago by the Labor government. We are below the average number of hospital beds per capita, we don’t have selected medical specialists and waiting times are outrageous. I am tired of going interstate for medical treatment. If enough of us are elected, we’ll press for two more hospitals. You also identified homelessness, policing etc. Canberra Progressives, I, we have policies and things we’d like to change for the better. So, if you want to get rid of Barr, vote for us, vote for me. It’s as simple as that.

Hi, I’m one of the candidates for Yerrabi: Mike Stelzig. Canberra Progressives do have policies. They can be found at https://canberra.progressives.org.au. My commitments, if elected, are listed on my website: http://www.mikestelzig.com. While we have general policies regarding health, the environment, transparency, greening-up Canberra, phasing-out stamp duty, incentivising electric bike use as an alternative to motor vehicles, efficiency review of the public service, create community hubs by providing more community gardens, local libraries, quality playgrounds, and local community facilities, etc. We are refining some policy details but the outcomes will mean more hospital beds, less waiting times, better qualified staff and more specialists in the ACT so that we don’t have to go interstate for treatment. We want a BETTER CANBERRA. We kept the launch short, sharp and succinct because we know that media want short, sharp and succinct stories. But the main takeaway is that Canberra Progressives are a bunch of “ordinary” citizens who will make ETHICAL decisions for the community (not for a big donors) based on EVIDENCE (not opinion) to EMPOWER all Canberrans (we don’t want democracy every four years, we want democracy 24/7 – 365 days a year). It’s important that voters understand that we are here for you and for you to get behind us so that we can form the next government or alliance. By voting for the same old you’ll undoubtedly get the “same old” dinosaur politics. Therefore, I’d like to ask Canberrans to seriously consider who they will vote for in October. Hopefully it’ll be me or one of my running mates. If you’d like to contact me, please do so via my website.

Thanks to the Riot-ACT’s Michael Weaver for coming to speak with us.