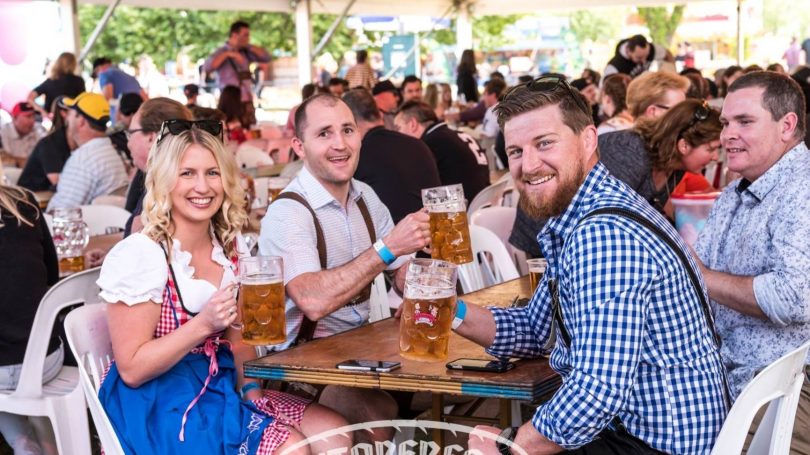 Under the big tent at Oktoberfest 2017 at the Queanbeyan Showground. Photos: Facebook.

It may be July, but tickets to the region’s biggest and best celebration of Bavarian culture, Oktoberfest Canberra, have gone on sale this week.

This will be the second year that Oktoberfest Canberra has been held just across the border in Queanbeyan, compared to its original and usual venue at the Harmonie German Club, and club president Kevin Bramboeck said this year is going to be its best event yet.

Each year, more than a tonne of pork knuckles, 180 barrels and 4500 bottles of German beer, 4000 sausages, and 2700 pretzels are consumed at the Canberra region Oktoberfest.

With free sideshow rides all weekend, this year there will be some new attractions and a few little surprises to mark its 55th birthday.

“So many people have told us that it is the closest to the genuine Munich Wiesn that they have experienced in Australia. This year, we are going to recreate that experience – with a few surprises that we think people will be very excited by.” 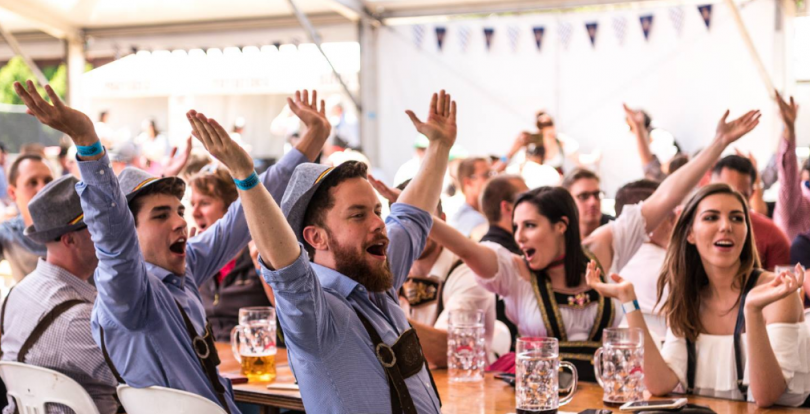 Mr Bramboeck said last year’s event drew patrons from as far away as Cooma, Jindabyne, Wollongong and Sydney, as well as busloads from Bungendore, Woden, Tuggeranong, and Civic.

“With financial support from the Queanbeyan-Palerang Regional Council and the NSW Deputy Premier and Member for Monaro, John Barilaro, we believe that our Oktoberfest will be the best in Australia,” Mr Bramboeck said.

The club said that it alone directly poured more than $50,000 into Queanbeyan businesses through goods and services during Oktoberfest 2017, and patrons spent much more.

Harmonie German Club manager Paul Berger said the club prides itself on putting on an event that is affordable and accessible to the community.

“There aren’t many events where a family of four can enter, enjoy all-day rides and entertainment, and eat for less than $50, as they can on our Family Day,” Mr Berger said.

“The support from both the QPRC and the NSW Government ensures that the Harmonie German Club can continue to offer great value for everyone – from partygoers wanting to sample the finest German beer and food, to those with an interest in German culture, and anyone who just wants to have a family day out.”

This year’s event has special significance, as it marks the 55th anniversary of the first Oktoberfest in the Canberra region, held on the site of the Harmonie German Club.

“In 1963, the first Oktoberfest Canberra was held by a group of families from Munich who had moved to Australia to help build the nation’s capital,” Mr Bramboeck said.

“The Harmonie German Club has held Oktoberfest every year since – it’s probably the longest continuously-running community festival in the region.”

Tickets are available here, with online ticket prices starting at $25 for Friday night, $33 for Saturday, and $10 on Family Day Sunday, with children under 18 and under parental supervision, free.

@The_RiotACT @The_RiotACT
Penrith coach Ivan Cleary's been handed a $20,000 fine for questioning the integrity of referee Gerard Sutton in his side's 28-12 win over the @RaidersCanberra https://t.co/YXBr6BVHUI (19 minutes ago)