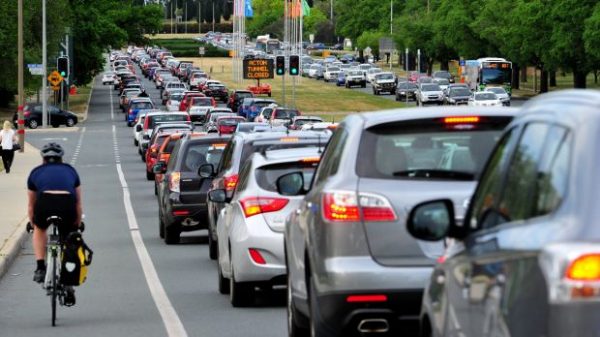 Did Mix FM mix up the traffic updates?

If you tune into Mix 106.3 FM for your peak hour drive to work it may pay to take its traffic reports with a grain of salt.

Tess in Kingston posted this message on Easter Monday after hearing the 106.3 traffic report.

“Easter Monday today, Canberra’s dead, everyone is down the coast or elsewhere. But turn Mix on & their traffic report tells me the GDE is chockers, Horse Park Drive is slow & Parkes Way is building? They’re obviously desperate for Hardley Normal’s advertising revenue, but these 30 min updates are bullsh*t!”

Maybe it was programming stuff-up but it’s not the first time The RiotACT has heard about 106.3’s traffic reports not reflecting the conditions of the day.

Who’s to know on a normal work day when it’s pretty likely that the generic description above is more or less correct about our main arterials?

Unless you are in the middle of it, just passed a bingle that’s closed a lane and it’s pouring rain.

Or as on Monday, it’s a public holiday and the robo-program doesn’t care.

So, is the Mix 106.3 traffic report a community service or an advertising opportunity?

Well it can be both, but if a pre-recorded generic report that covers all possibilities is what we’re getting, then the station’s credibility is on the line.

Maybe nobody takes it seriously and it’s just part of the background noise of our commutes.

But what if someone does heed the advice, changes their route and the journey goes pear-shaped?

Does the Mix bear some responsibility, or sorry the joke’s on you?

And if you want some real traffic advice, check out the Australian Traffic Network (ATN) on 103.9 ABC News Radio every half hour or download the ACT Traffic app.

“We also receive a lot of positive feedback on these reports and I can assure you that ATN and our delivery is focused on being as up-to-date and accurate as possible with information taken from a range of sources, as frequently as possible, during peak travelling times of the day,” Mr Wagstaff.

“With respect to the day(s) you mention, I have also received feedback (and seen other reference points from various posts on social media) that there were in fact, considerable traffic hold-ups across some parts of Canberra and surrounds even with it being a public holiday Monday.”

He conceded that on rare occasions there had been technical difficulties and errors where redundant updates had gone to air.

“I can assure you that this is of course, not a common occurrence, and that I am confident in the substance and frequency of our traffic report offering,” Mr Wagstaff said.

My favourite highlight was driving home from work, every day for at least a month 104.7 mentioned during the traffic update that Townsend Place would be closed from 7pm. That’s the road to John Knight Memorial Park in Belco.

Not entirely sure how the traffic there would impact anyone. It seems they know the regular suspects (Northbourne, Parkway, GDE, etc), but given that traffic in Canberra is really fairly insignificant compared to larger cities, they feel the need to make up additional “road hazards” to pad things out.

Don’t get me started on the accuracy either. The number of times I’ve been on roads which I’ve been told is “a carpark” but freely flowing is ridiculous.

Looking forward to the traffic update that tells me that there are only 50 available parking spaces at the Hyperdome.

Thank the lord for podcasts so I don’t need to listen to radio drivel. Gary? Gareth? SSDGM.

I’ve felt for many months that 104.7 and 106.3 (which are the same station anyway) just make up their traffic reports, which is pathetic. Best solution is to use the app “Waze” on your mobile which will calculate the best route to work or home in real-time. Let’s be thankful we are not having to deal with Sydney traffic! 🙂

There have been many days coming home from work around 2:45pm and hearing that traffic is backed up in both directions along lathlain street in Belconnen… I am often sitting on Lathlain street and there is little to no cars… and feel asif I hear the same report every couple of days.

2CC is also an offender, pre-recording its news bulletins. Quite often I’ve been listening to the “highlights” (cough, cough!) of the Alan Jones show at around 11:20AM and the newsreader’s voice comes in over the top welcoming us to the midday bulletin before the panel operator realises it is going to air and flicks the switch off midway through the first story.

Commercial radio is bad. Who listens to it anyway?

You just need to be on the roads they are talking about so see what they say Vs reality are two different things.

Though just admit I had thought they were doing the ‘reports’ based on what the could see by looking at traffic in google maps not just making it up. Though not surprised to hear.

Same thing on Good Friday. We were driving home from a bushwalk, and heard the mix 106.3 traffic updates a couple of times late in the afternoon. Yep, apparently Constitution Ave was to be avoided, and traffic was bumper to bumper through Phillip. Sure it was…..not. I don’t listen to commercial radio very often, and I suggest it’ll be even less often now!! What a crock!!

They are just building receptivity for us to handle the real traffic congestion that will ensue from the Trolley Folly whenever is gets going.

Lol when will people get over it! It’s being built and it won’t make things worse. Though we could debate how better it will make things. My answer would be not by very much but increase traffic congestion no way. More people living out in the burbs of Gungahlin will do that.

Greg Batten - 16 minutes ago
Great idea for both ACT light rail and bus networks. View
Ashley Wright - 2 hours ago
Justin Watson it is, the article has that a bit wrong as the “new” stop is at Sandford Street intersection about 1km away... View
Justin Watson - 6 hours ago
It looks like the park and ride is near the existing stop to the north of Mitchell and the new stop should be going near Sand... View
Opinion 8

KJ Enaj - 37 minutes ago
Dave Ryan because people respect the fact that to understand the situation you would have to have experienced it. When was th... View
Dave Ryan - 40 minutes ago
Steve Ross sooo.... your opinion is the best, then? OK. Answers my question about whether the rest of us are allowed to talk... View
Dave Ryan - 7 hours ago
Steve Ross because we're not allowed to have opinions about this? Or because we're not allowed to ask questions about it? Int... View
What's On 8

Martyn O'Connell - 51 minutes ago
the 333 bus painted up to look like the XPT View
Katy Did - 2 hours ago
I loved that tram when I worked in Civic View
Karean Vaughan - 3 hours ago
I remember catching it at lunchtime, opposite the School of Music back then. A very convenient way to get to Civic centre . View
Opinion 18

Alex Elliott - 2 hours ago
Other countries have taxed petrol engine cars to encourage the uptake of electric vehicles which has resulted in their prices... View
News 20

Alex Elliott - 2 hours ago
The ACT has many interstate cars using the roads. How does the Government propose to tax these or apply a levy to them so tha... View
Opinion 52

Matthew Windebank - 3 hours ago
That photo explains everything. When works are underway with a reduced speed limit you are supposed to 'bag' or cover the exi... View
Valerie Foster - 13 hours ago
Too many speed changes in too many areas. It is revenue raising. View
Property 11

Adrian Evans - 8 hours ago
All the best GT. Look forward to more day at the cricket together View
Community 44

A passenger on the repatriation flight that arrived in Canberra on Thursday has tested positive for COVID-19, ACT Health said...
Opinion 20

When I was growing up, I knew from an early age that money was tight in our family. How did...
Community 16

Negotiations over pay and conditions which could avert strike action are continuing between garbage collection company Suez and the drivers'...
Opinion 52

As summer approaches, ACT police are warning us that more Canberrans than ever have been caught speeding. They say, rightly,...
Best of Canberra 45

Senator Zed Seselja has brushed off a challenge for the Liberals' No 1 spot on the Senate ballot for the...
Community 21

Five new and improved playgrounds in Torrens, Higgins, Waramanga, Richardson and Narrabundah will give Canberrans more areas to play and...
News 20

Radio crew give Queanbeyan something to sing about

@The_RiotACT @The_RiotACT
Hot in the City: Asian Taste is bringing the flavours of Malaysia's fusion cuisine to Mawson https://t.co/BfapEQ6dPs (1 hour ago)

@The_RiotACT @The_RiotACT
The Canberra Show has been cancelled for the first time since 1943 after organisers conceded it was impossible to coordinate around COVID-19 https://t.co/gZa4d8MWPC (4 hours ago)