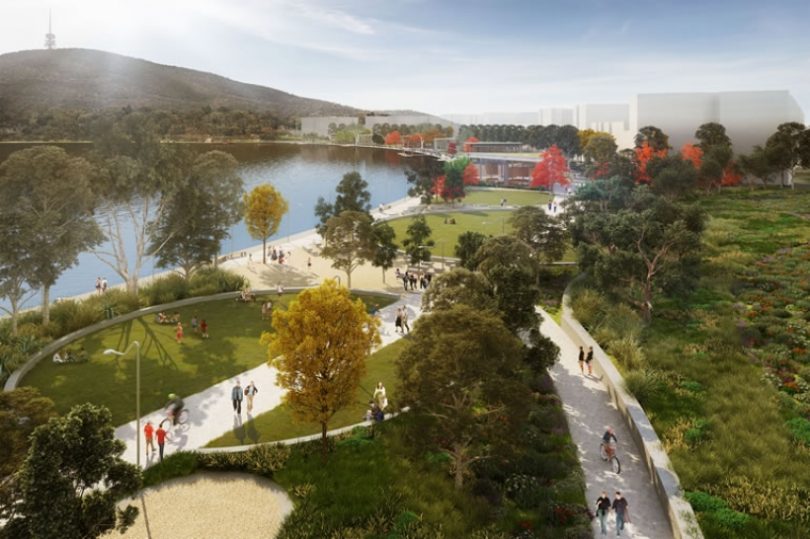 The Canberra community has been asked to choose the name of the new public park at West Basin, on the headland next to Commonwealth Avenue Bridge.

The City Renewal Authority said the names of a convict-turned-land manager, a landscaper, an architect-artist, and the founder of The Queanbeyan Age were the four options selected by the ACT Place Names Committee.

“This new park is going to be a great public asset. This is a wonderful opportunity for the people who will use the park to have a say in choosing its name,” Mr. Snow said.

“With 23,000 plants, grassed areas, barbecue facilities, public art, connected walkways and access to the new public boardwalk on the lake’s edge, the park will be a focal recreational destination in the city precinct.

“It will need a name that reflects its importance to the region and the four names put forward all reflect significant contributions to the development and growth of the Canberra region.”

The four options selected by the ACT Place Names Committee are:

People can vote online at yoursay.act.gov.au until Friday 27 October.

The Authority said the nearly 23,000 plants for the new park had been ordered, with about a third grown at the Yarralumla Nursery.

The plantings consist of a large range of ground-cover shrubs and grasses – including the locally endangered Button Wrinklewort – as well as 86 new trees.

Mr. Snow said the park would be a significant improvement on the previous public space in West Basin.

The landscaping will not only significantly improve the attractiveness of the 14,700 square metre park but will also play an important environmental role.

“The mixture of native and exotic trees and plants chosen are robust and climate resilient. They will increase the percentage of vegetation cover and improve the diversity of habitat and biodiversity outcomes,” Mr. Snow said.

“This will have a positive impact on the surrounding area through an increased number of birds and wildlife, increased shade, and improved soil, while the application of water sensitive urban design will reduce the pollutants entering the lake.”

The new park and its adjacent boardwalk are expected to be opened to the public in early 2018.

To see the full list of plants ordered for the new park, visit www.cityrenewalcanberra.com.au

Who do you think the new park should be named after? Is there anybody else who should have been nominated?

Whatever name is chosen I hope that the full name is used. We don’t want another landmark without the person’s first christian name as happened when Lake (Walter) Burley Griffin was named.

The first person who says “Park McParkface” gets it…

@The_RiotACT @The_RiotACT
Bogong moths, witchetty grubs and crickets could add more crunch to your cooking according to a @CSIRO report outlining Australia's potential in the edible insects market https://t.co/oevzIJa51X (53 minutes ago)