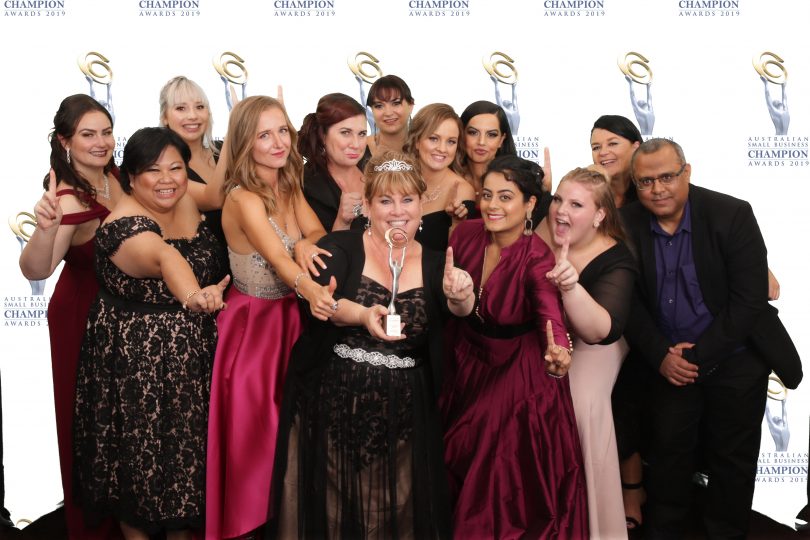 Running a small business is a hard slog. There are ups and downs, winning moments and losing moments.

Small business owner Kate Prior says she has experienced the full gamut of emotions running face2face Recruitment, but of late she’s on a mega high.

“The team screamed when we heard our name announced,” says Kate. “It’s such a morale booster and so good to see Canberra on the map.”

Kate opened face2face in 2005 to make a difference to her industry.

“Throughout my career, I had seen some parts of the industry become a bit impersonal which is ironic given that recruitment is about people,” says Kate. “I wanted to pave a new way and so started by tossing out the traditional industry commission structure which I believed was putting money before people. We concentrate on enriching lives by providing employers with great candidates and finding candidates meaningful work. For us, it’s truly about face-to-face communications.” 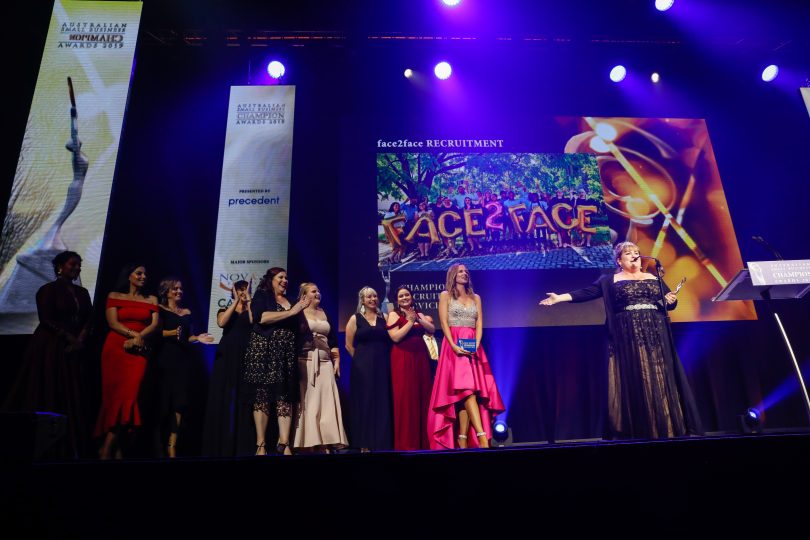 Kate Prior thanking her staff for making the National Recruitment Services Award possible.

When she first swung open her doors for business, Kate had two staff. The team sat on the floor in the office to have their initial meeting because the furniture hadn’t yet arrived. Undeterred, face2face placed its first candidate in its first week of operations. The client? Another recruitment company. “It was a good omen,” says Kate.

Today Kate has a team of 20 and has recently won prime positions on three national government panels, catapulting face2face to another level. The business is now on 20 panels all up, public and private sector, which has meant massive growth in a short time to deal with the injection of new business. Since opening in 2005, face2face has found 3700 people jobs.

“We’ve recently moved to a space twice the size of our former office,” she says, “And we’re already reconfiguring to accommodate staff growth and increased local, regional and national business opportunities.”

Giving back to the community is a true face2face value, with the team gathering every year to develop a social responsibility strategy. The business has supported dozens of not-for-profits and charities—some for up to 13 years—with in-kind support, supplies, funds and free presentations and seminars.

Kate has also donated close to 1000 copies of her book Resume Success Secrets to local and regional libraries. The book, which shot to #1 best seller on Amazon in its category just days after release, was written to help candidates win jobs. “Looking for work can be a challenging and scary time for many and the best way to get that dream job, especially in a highly competitive market, is to research and be prepared,” says Kate.

face2face also spends considerable time running free workshops for employers, on topics such as effective onboarding, and candidates, including those from groups that may face special challenges in finding work, like mature-aged workers and return-to-work parents.

At the awards gala event, Senator Michaelia Cash spoke about small business being the engine room of Australia’s economy. This year’s awards attracted a record 2200 entries.

Life hasn’t always been shiny bright for Kate, however. “It’s inevitable that small businesses have to find strength to get over major hurdles,” she says. “I had a staff member embezzle money from me in my second year of business and I thought it would be the end of me. We’ve also had to work strategically through major economic issues like the global financial crisis. You dig deep for resilience and strength.”

In addition to winning at a national level, face2face was a finalist in three other Australian Small Business Champion Awards.

For more information or to get in touch, visit their website.

Arlene Smith - 4 minutes ago
Kathleen Mary Smith Erin Winter in adventure park? View
Bridget Trussler - 49 minutes ago
My son many years ago went head into the pole. Please get rid of it before someone is killed...... View
Claire Anderson - 2 hours ago
Daniel, the newer ones really do stop way WAY more abruptly. I too rode the old ones with help of people pulling and never go... View
News 13

face2face pays it forward and gets the job done