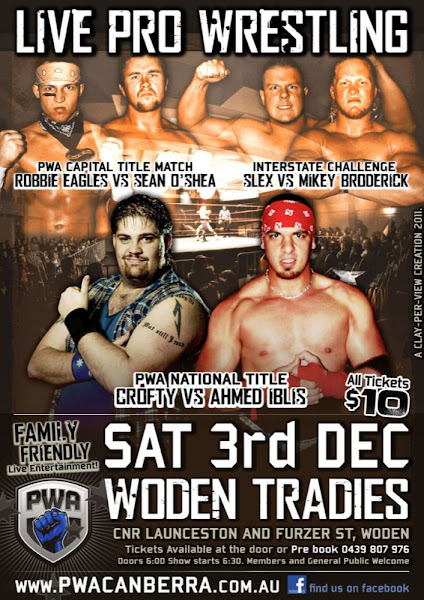 A huge main event has already been announced as the number 1 contender for the PWA National title Ahmed Iblis challenges Crofty for his PWA National Championship.

A huge interstate challenge will also take place. Three of the best Pro Wrestlers from Canberra will face three of the best from Melbourne in 3 single matches. The first match has been announced as Mikey Broderick will be representing the ACT and his opponent will be the former PWA National Champion Slex.

With all tickets only $10 this is a great night of entertainment for the whole family. Member and general public welcome and tickets can be purchased at the door.

Looks like someone passed on Crofty’s training info to Iblis – he was a no show! In his place was the decidedly scared (and bearded) Ryan Eagles, who wasn’t even a match for the chorus of kids screaming “scaredy cat” at the top of their lungs. Crofty pulverised him like the 3 steak smoothies he downs for breakfast.

Unfotuntately for the local crowd, Melbourne’s Carlo “cash money” Cannon managed to pony-ride his way to defeat against Jack Arkham – although his reputation as “the panty-dropper” suffered irrepairable damage when he celebrated the win by air-grinding his crotch in the face of a bloke in the crowd.

Premonitions about Slex having his backside handed to him were always going to be proven true from the moment Mikey stepped out, simultaniously sending defence to DEFCON 3 and making every female in the room pregnant. It looked like the match was over about halfway in when Slex appeared to have badly sprained his ankle after an awkward tumble. As he was being assisted from the ring, he caught Mikey with a surprise backheel kick. Needless to say that Mikey nearly punched his face right off as he took to the jerk with the impact of a nuclear bomb. A lucky few fans managed to get in on the action too as Slex was dragged around the ringside in a headlock. After a beating like that it will probably be a while before we see him show up in Canberra again.

There were plenty of other great matches on the night, with the ladies obvious favourites being the dream-team tag duo of Mint Condition and Sean Custom.

Once again, PWA tuned on a great night’s entertainment for a measly $10. If you haven’t seen live wrestling before, come see the next show or Crofty might pay you a personal visit – nothing sinister, but you might want to padlock your fridge.

Crofty looks like Johnny Vegas after a month on weightwatchers.

They had to shrink his photo down for the poster to make it look like Iblis has a chance of winning.

Crofty looks like Johnny Vegas after a month on weightwatchers.

It seems that this weekend we’re being served up a smorgasbord of smackdown! Someone at ICW has lost their mind and scheduled an event for Saturday night in Tuggeranong – the same night that the juggernaut of PWA will be blowing the roof off the Woden Tradies. Good thing that Rex loves the sound of his own voice, because he’ll be talking to an audience of empty chairs.

Meanwhile the capacity crowd will be baying for blood in “Mikey’s house” – no way I want to miss seeing Slex wear a face full of canvas and Robbie Eagles getting his feathers plucked.

Someone should put Iblis on notice that Crofty has been spotted training at Central Cafe every day for the last month. Apparently his workout consists of playing AC/DC at full volume while punishing two mixed grills and a side of rissoles, with a jug of gravy to wash it down. (Rumour has it the waiter who dared to offer him a salad is currently having a bar stool removed from his trachea.) The bogan warrior is bigger, meaner, and hungrier than ever!

This event will be bigger than Mikey’s triceps!

If Mr Cannon has a wardrobe malfunction, please post a video, and we can all make inappropriate and lingering comments about his attributes for days and days and days.

But I’m betting that there would be a strange silence, should too much be revealed.

Lock up your daughters!

Slex!!….I want you to take me to the store where you bought the balls to show your jerkoff face back in Canberra. I’ll pay $10 every day of the week to watch his ass get handed to him by Mikey. Have you seen Mikey’s frikken triceps?! He looks like a Transformer.

Robbie Eagles (the fairy princess)…how many bandanas does this kid need? For his sake he better have spent more time in the gym and less time in front of the mirror prettying himself up – O’Shea will be relentless on your ‘skinny-fat’ ass

Iblis…what can I say about your wrestling style that hasn’t already been said about your home town…..it looks bombed out and depleted.

If Mr Cannon has a wardrobe malfunction, please post a video, and we can all make inappropriate and lingering comments about his attributes for days and days and days.

But I’m betting that there would be a strange silence, should too much be revealed.

Not sure why Slex is bothering to head back up to Canberra, surely he can get a solid beating in Melbourne and save himself the cost of return flights.

Good to see O’Shea is back. Apparently he didn’t turn up to the last event because Iblis organised to meet with him before the match to ‘discuss tactics’ which resulted in O’Shea waking up in emergency.

It’s because of crap like this that Iblis can’t be trusted and should have been banned years ago..if he wins the title it’s going to be an absolute disgrace.

MERC600 - 9 hours ago
Tis a sad thing. Have wandered in at various times over the last 30 odd years, and will miss the tav and Jenny and Gumby. Sti... View
John Coleman - 9 hours ago
Alicia Conley as long as your protest doesn’t delay my McNuggets order thanks View
Opinion 106

Dan Adams - 9 hours ago
Sign and share the petition to return the limits back to 60km. https://chng.it/chvTLkD8bc View
News 198

Dan Adams - 9 hours ago
Sign and share the petition to return the limits back to 60km. https://chng.it/chvTLkD8bc View
Community 23