Qigong: an experience that feeds the mind and body 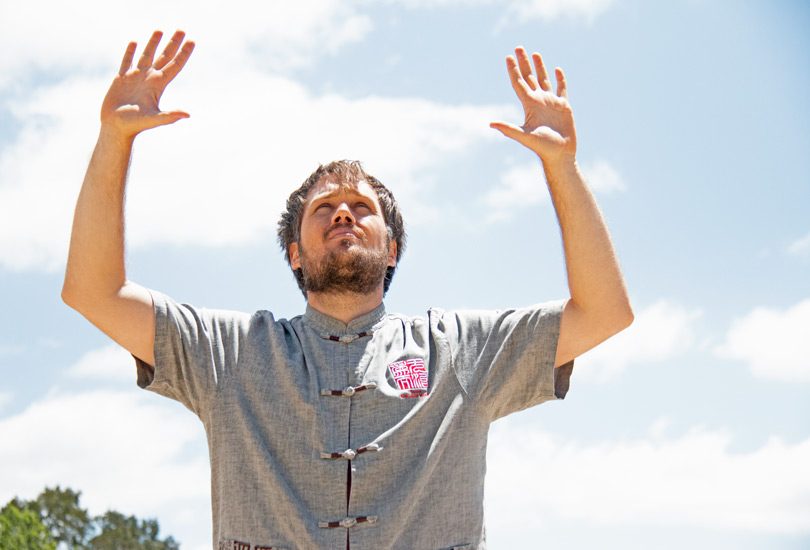 An hour spent watching Sunny teach a room how to practice Qigong and I can’t help but think I’m in a drama class. A drama class that includes deep meditation and even a little bit of therapy – it all depends on what you take home from the experience.

I also soon discover that the instructor, Sunny Forsyth, is a magician. Having the participants form a circle in the Belconnen Community Centre gym, he focuses on movements for the kidneys. Eyes closed, the participants move rhythmically according to Sunny’s instructions, while he speaks of colours, visualising emotions and how they connect to your body. It’s spiritual but also scientific – listening to him, I feel like my nervous system has been lit up like a Christmas tree.

And when the exercise is over, the participants open their eyes, only to discover that they were filled with tears. They can’t explain it, and neither can Sunny.

It is then that I realise Qigong is unlike anything I have experienced.

If you have never heard of Qigong (pronounced Chi-Kung), perhaps you will be familiar with its more popular iteration, Tai Chi. But that is not what Sunny teaches.

While Tai Chi is more commonly perceived as a martial art, Qigong broadly translates to mean ‘energy skill’. They have both been repackaged over time but originated from ancient Chinese healing practices which relate to how our health and vitality are not just linked to physical attributes, but also linked spiritually and mentally.

Sunny practised for around eight years to see if Qigong was a good fit for him. An engineer by trade, Sunny found himself going through the motions in life, unable to shake the feeling that he was a square peg in a round hole. An opportunity to represent Australia as a youth ambassador found him in Laos, where he finally felt like he was able to contribute to the world. While there, he also co-founded Abundant Water, a not-for-profit that develops sustainable and scalable clean drinking water projects in developing countries.

But while his sense of purpose was being restored, the volume of work and the circumstances were taking a toll on him mentally and physically.

“It was a very challenging environment to work in. I got tropical illnesses, my body went into chronic fatigue patterns so I needed something to do that would keep my health going,” Sunny says.

“I had already started doing Qigong before I went to Laos and I just got deeper and deeper into it. I found that I could give myself a daily practice that would allow me to show up no matter what else was going on and do what I was becoming increasingly passionate about. It became a platform for me to make a contribution, to express more of what I thought was important.” 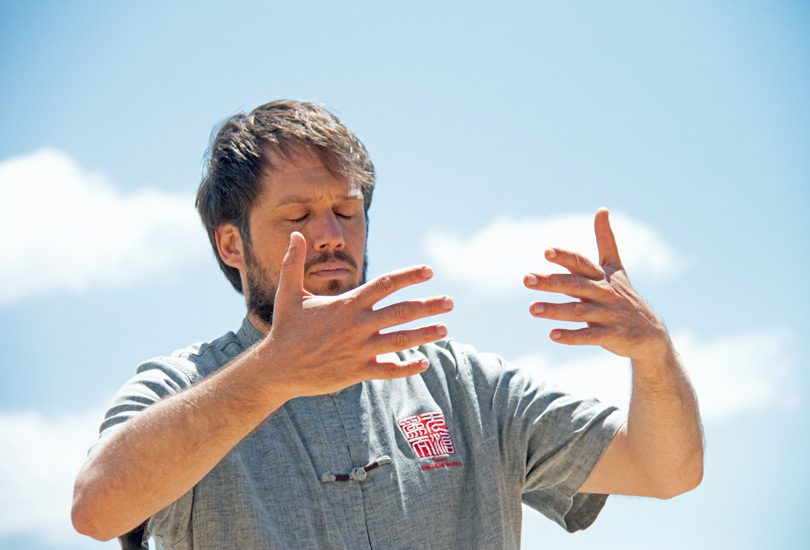 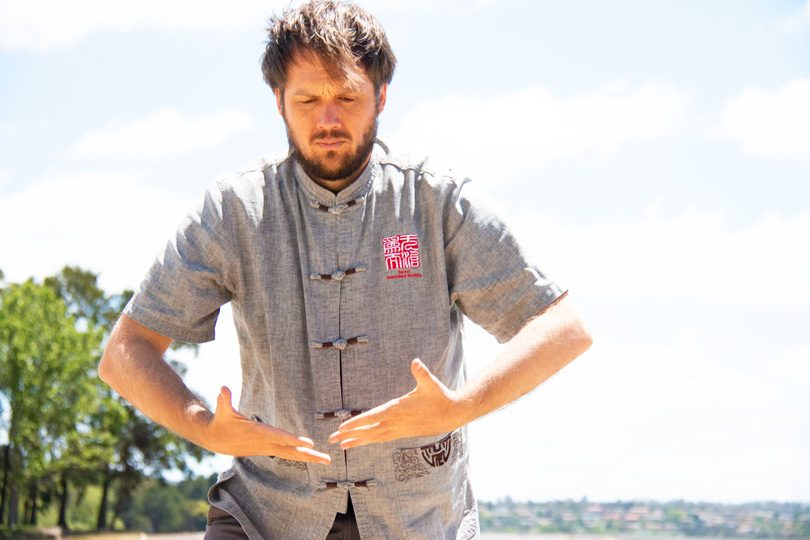 “Qigong became a platform for me to make a contribution, to express more of what I thought was important.”

After honing his skill and returning to Australia, Sunny faced a reverse culture shock when he realised how differently Western and non-Western societies address the concept of healing. Combining his two worlds became Sunny’s next venture. He sought to bring his human experience and the knowledge he had gathered from a completely different culture and adjust it to address the challenges people face here.

“One of the practices I find a lot of people get a positive experience from sees that the consciousness in our body is not actually centred in our head but in the organs in our abdomen,” Sunny explains to me. “Whether or not you believe that, it is such a departure from the way we live our lives.”

I must confess, I have attended my fair share of these kinds of sessions. Which is why I was not only pleasantly surprised but also in awe of Qigong. This is a holistic practice. It combines science with spirituality, movement and the human experience. It caters to your emotional as well as physical wellbeing. The participants at Sunny’s class would move according to his instructions, and after each exercise would freely confess their emotions. Frustrations, sadnesses, fears are all aired out and everyone listens, offering just companionship and a safe space to vent. 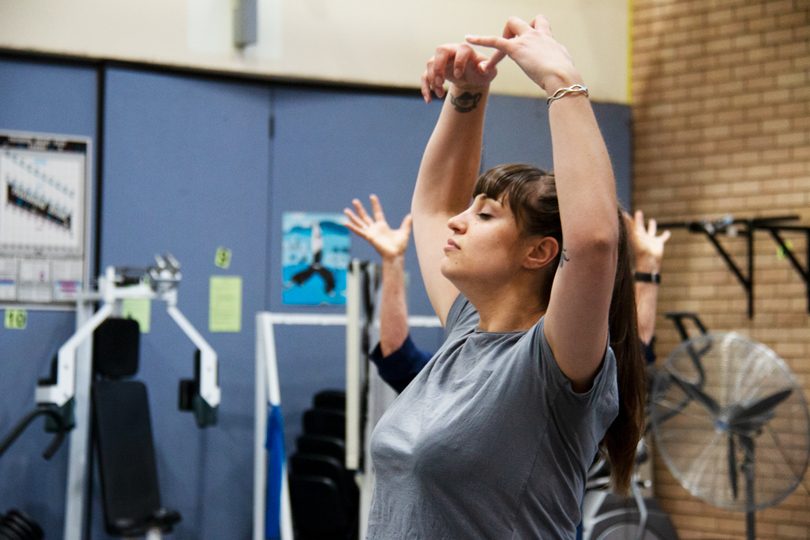 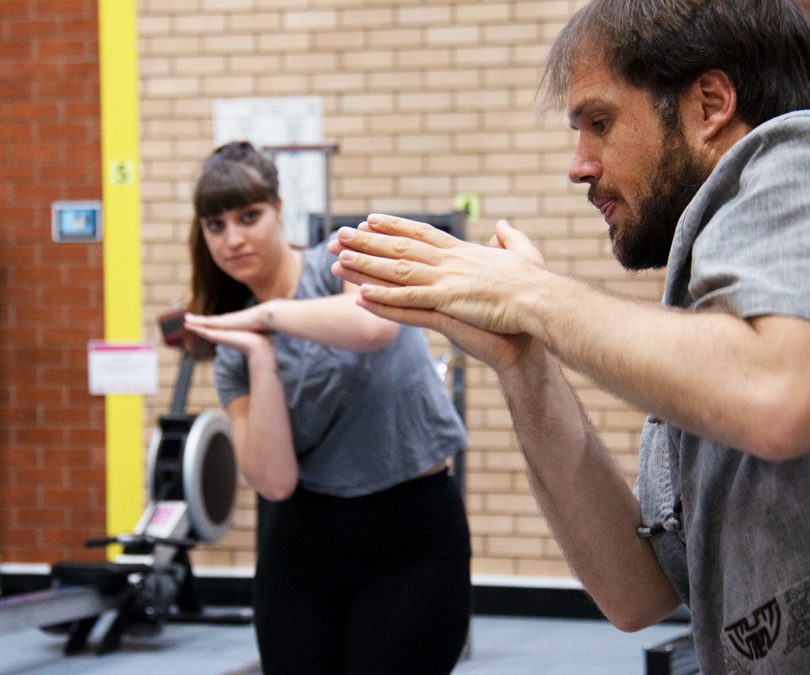 “I have people coming to me saying they have digestion issues and that they are emotional eaters and because I work on the abdomen, they think I can fix it. But that’s just the tip of the iceberg. I’ll give them exercises and while they are practising, they will suddenly start talking about a negative emotional experience and how they have pushed it down and not thought about it. They make that connection on their own,” Sunny says.

“Qigong allows us to establish our own safe space, to connect into ourselves so that when life throws the inevitable at us, we actually grow through that experience.”

An invaluable life skill that we could all use, for sure. 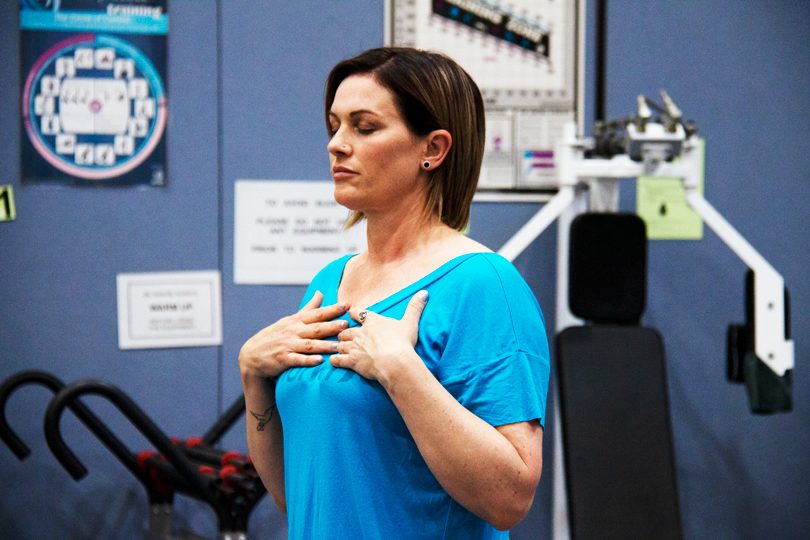 “Qigong allows us to establish our own safe space, to connect into ourselves.”

So the next time you feel overwhelmed, try one of Sunny’s classes; if not for anything else, for the experience. You’ll be hard-pressed to find something else quite like it.

Lyn Kelly - 1 hour ago
Hi Bryan, I have 501 and may consider selling it if you are interested. View
News 20

bigred - 1 hour ago
I suspect there are same internal software problems in their billing systems. In my case , last bill was OK but also a wake u... View
JS9 - 5 hours ago
While there is no doubt that the contracts are unfavourably placed at the moment, its not '3 times the current electricity pr... View
bj_ACT - 6 hours ago
Spot on Chewy. As has been pointed out by a few people over the last year. The ACT government has signed up fixed price 20 ye... View
News 7

Johnny Grey - 2 hours ago
He would say that, wouldn't he. Police always want to have their idea of control of drug use.... View
T - 3 hours ago
It would be great if they could legalise medical marijuana for people as an alternative to pain management medications and to... View
poorman - 3 hours ago
Please read https://www.forbes.com/sites/mikeadams/2018/03/28/california-officials-say-marijuana-legalization-causing-more-vi... View
Community 76

Futureproof - 4 hours ago
It's not just Hyundai EVs, it's Hyundai in general. There have been worldwide recalls for vehicle fires on Hyundai ICE vehicl... View
nobody - 6 hours ago
Hyundai have recalled about 1,000 electric vehicles in Australia to replace the batteries, and about 82,000 worldwide. LG hav... View
Opinion 78

Once you walk through the predator-proof fence, it's like going back a century in time. Sure, you can hear the...
News 44

WARNING: This story may distress some readers. 'Pindar' the peacock is the latest to be struck by a car on...
Best of Canberra 50

Accessible burlesque shows strength and beauty within every body

Get creative! Using art for wellness

@the_riotact @The_RiotACT
Thirty Canberra corporate elites are about to take on the 145 km Canberra #Centenary Trail. Who will complete the #challenge? Over five days, follow their adventures as they tackle the 'Canberra Camino' and raise money for @Menslink https://t.co/ay3SWKaL4Y (17 minutes ago)

@the_riotact @The_RiotACT
The @WNBL #draw has been released and, as Tim Gavel writes, there's a lot for @UCCapitals #fans to get excited about https://t.co/EV8vf94L2J (2 hours ago)