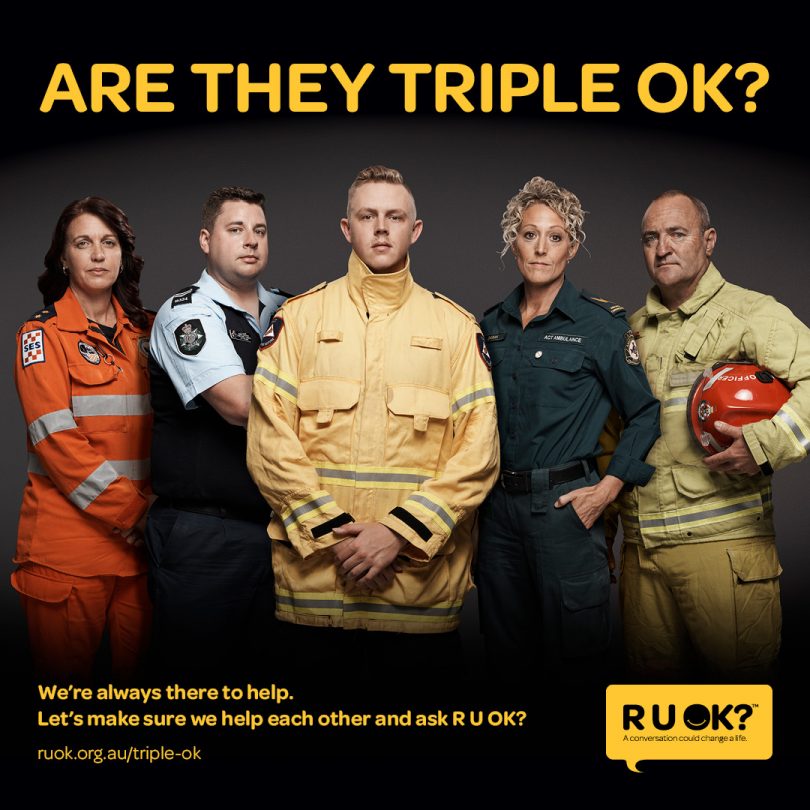 Trauma comes with the uniform for our paramedics, police and firefighters. In the line of duty, Canberra’s emergency services respond to distressing incidents every day, and they can have a lasting effect on their mental wellbeing.

A new campaign has been launched by suicide prevention organisation R U OK? in an effort to increase peer and social support for emergency service workers and volunteers.

The aptly named ‘Are they Triple OK?’ program is providing extra resources to frontline personnel and their families to help them get the support they need if they’re struggling with mental health issues, and it has the full support of the Minister for Police and Emergency Services Mick Gentleman.

“Our frontline people see some terrible trauma in their workforce and, of course, some incredible situations as well, and they work incredibly hard for Canberra people in that situation so we need to be able to support them as much as possible,” Mr Gentleman said.

“We have wellbeing programs across all of our services of course, but this is an extra opportunity to have a look at the resources available on the R U OK? website, have a chat with your family and ask your friends and work colleagues R U OK?”

The campaign was developed after a Beyond Blue study found alarmingly higher-than-average rates of stress and mental health issues among the 21,000 first responders surveyed.

According to the report, one in three emergency employees experience high psychological distress compared with the national average of one in eight, while frontline responders are twice as likely to have suicidal thoughts and are three times more likely to have a suicide plan.

Three-quarters of employees found the compensation and rehabilitation processes to be detrimental to their recovery.

“Overwhelmingly, Beyond Blue’s landmark Answering the Call report tells us first responders want to support colleagues who might be dealing with mental health issues, that they don’t see these as a sign of weakness,” she said.

“‘Are they Triple OK?’ takes this finding and equips people to reach out, connect and support one another.” 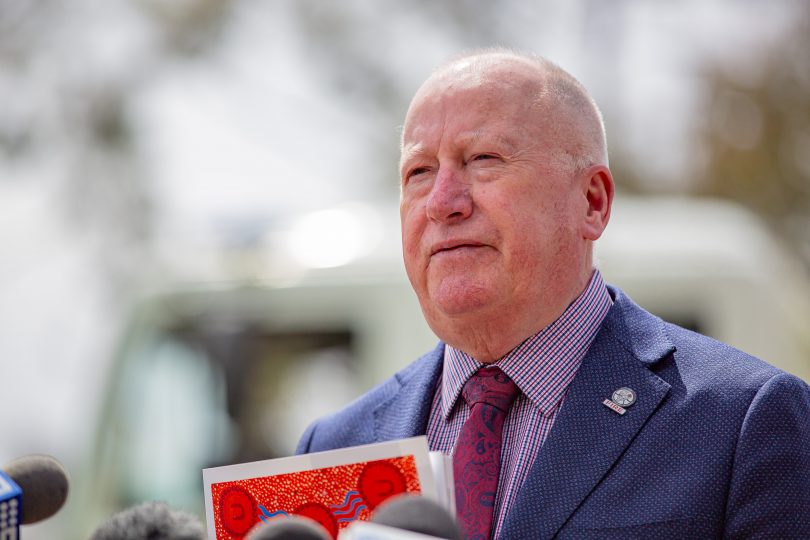 Mr Gentleman said the R U OK? initiative added to a number of programs the ACT Government has in place across the emergency services.

“We have provided quite a number of support services; our blueprint for change is a really good example,” he said.

“We have worked through that blueprint for change to provide wellbeing services for our frontline people and they have accessed that on a number of occasions. That means we can have them back to work earlier if they do need some time off and we can support them and their families.”

But as Beyond Blue identified, the problem with these services is not accessibility; rather, it’s the stigma attached to fronting up and admitting there’s a problem. 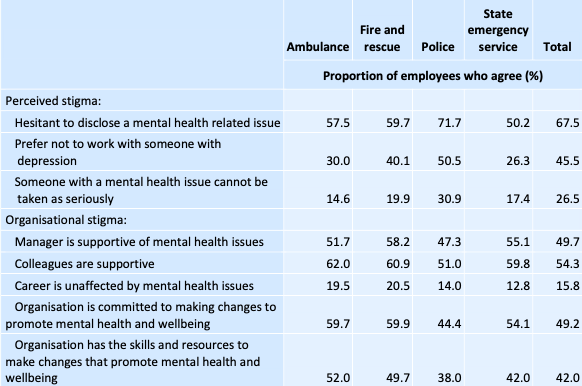 ACT Ambulance Service Communications Officer Sarah Gray wants to change this and help empower colleagues and family members to take that step and ask the question if they think someone might be struggling.

“Someone going through a tough time might not recognise it in themselves, or they might not want to say anything, so to have someone else say ‘Are you OK?’ gives them the opportunity to open up,” she said.

“They might not say ‘yes’ straight away, but it builds that trust and a week later they might come back and say, ‘actually no, I’m not’”.

Free digital and printable resources support the initiative, including a conversation guide on how to ask the question and navigate the conversation if the answer is, “no, I’m not OK”.

The resources are designed to foster a supportive work culture and address the high rates of self-stigma identified within the services.

Resources are now available on the R U OK? website at www.ruok.org.au and will be regularly refreshed to address feedback and promote long-term behavioural change.

Tags Beyond Blue R U OK? R U Triple OK?

Barry Matson - 1 hour ago
of what? View
Michael Guina - 2 hours ago
It has to start somewhere and those two buildings are living example . View
Barry Matson - 3 hours ago
Kathleen Lee Canberra has no history. View
Opinion 80

HiddenDragon - 3 hours ago
Some cautionary words here about the limits of battery technology - https://www.abc.net.au/news/2021-02-16/bill-gates-zero-em... View
dulynoted - 6 hours ago
those statistics might be outdated; renewables are getting cheaper and more energy efficient every year as technology improve... View
Capital Retro - 7 hours ago
In which way isn't nuclear power profitable? It depends on which experts you are talking too: https://www.ceda.com.au/NewsAnd... View
Sport 2

Support for the the national security and emergency response community