Foxsports have the happy news that the Green Machine’s rumbling into gear nicely:

Canberra burst out of the blocks with four first half tries and survived a late Brisbane fightback to win 30-18 in their NRL clash at Canberra Stadium.

The game was built up as the perfect State of Origin audition for Josh Papalii.

However the Canberra enforcer had a mixed night, making a whopping 151 metres in attack yet making several unexpected errors and being put on report for a lifting tackle on Josh Hoffman with just 10 seconds left on the clock.

Raiders coach David Furner didn’t seem too concerned about Papalii’s tackle on report, nor his captain Campese’s when he slid into Reed in the 37th minute.

“Have a look at the conditions,” Furner said.

“The dew on the ground, you could slide from 30 metres out and end up there, please. 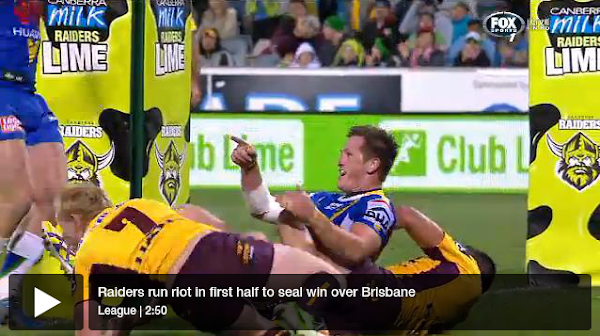 One of your kids is five and the other is cool?

Well that joke fell apart when the reply didn’t auto emoticon the response… thanks website.

Go the Raiders! My poor kids (5 and 8 ) couldn’t understand:
a. why the Raiders were being called the green machine when they had blue footy jerseys on. “Should be called the ‘Blue Machine’ ” they kept saying, even though I explained that teams may wear different coloured footy jerseys to raise money.
b. where the promised snow and toboggans were.

Go the Raiders! My poor kids (5 and 8) couldn’t understand why they were being called the green machine when they had blue footy jerseys on. “Should be called the ‘Blue Machine’ ” they kept saying, even though I explained that teams may wear different coloured footy jerseys to raise money.

Karina Widjaja - 2 hours ago
Lyneham ... spotted 3 💛🖤 View
Suzanne Lloyd - 3 hours ago
They are regular visitors in Latham. View
Janet Mulgrue - 4 hours ago
We had them in the bottle brush in Dunlop a couple of weeks ago View
News 46

rossau - 3 hours ago
Everyone owes money? Isn't that the real problem? View
News 15

Mathew McMahon - 6 hours ago
When the Electric switch's are turned off or on at the Belconnen Sub station an explosive noise is produced which echos acros... View
News 6

Lynn Stape - 8 hours ago
I dont normally agree with Rattenbury but as Canberra has already experienced a horrible toxic smoke filled summer , I would... View
News 26

noid - 9 hours ago
Our family have taken the train from Canberra to Sydney return a few times now and it is now my preferred transport option. I... View
Community 147

O L - 9 hours ago
Sadly I know the father of one of the boys killed here. They were driving back from the coast after a night fishing trip and... View
News 5

As I stand waiting for my order, Kate is continually fielding waves and honks from the cars that drive by....
Business 0

@The_RiotACT @The_RiotACT
The Bushfire Royal Commission is exposing how close the ACT came to losing some of our most endangered and vulnerable flora and fauna, and how a rapid response team is helping avoid further devastation during the fragile recovery stage https://t.co/ytdlpyegxF (1 hour ago)

@The_RiotACT @The_RiotACT
Shannon Noll visited the Bayldon Ag store in Queanbeyan this week to catch up with old mate Paul Nicholl. The popular Aussie singer has been in isolation during the past few months and was taking a break from dad duties https://t.co/K4e8dPFhnv (2 hours ago)

@The_RiotACT @The_RiotACT
The Canberra football community is uniting to help those less fortunate. A large initiative is underway to deliver educational supplies and books to children in need https://t.co/0PlJRl36Ym (5 hours ago)