Raiders fizzle against Cowboys. 30 over 12.

Foxsports has the dispiriting news of the Raiders getting thumped in Townsville.

Two late tries to Michael Morgan and Ashley Graham have given North Queensland their third victory of a slow-starting NRL campaign, a 30-12 win over Canberra.

Halfback Morgan was denied a try by the video referees in the 57th minute on Saturday night but had one shortly after, backing up a Tariq Sims’ break to score seven minutes later. 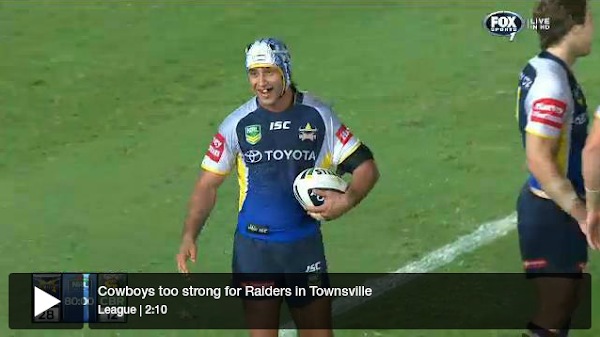 7 Responses to Raiders fizzle against Cowboys. 30 over 12.
Filter
Showing only Website comments

They did better than the Sharks, mate.

Completely impotent football team. Not once since Furner took over have I seen the Raiders produce something clever or innovative with the ball. There’s more to Rugby League than completing your sets and getting close enough to put a bomb up on the 5th.

The Raiders making week 2 of the finals considering the start they had is an exceptional effort. Or do we now judge a team to be a failure if they don’t win the premiership?

So the Raiders and Brumbies are connected, just like Lake George and that lake in New Zealand…..