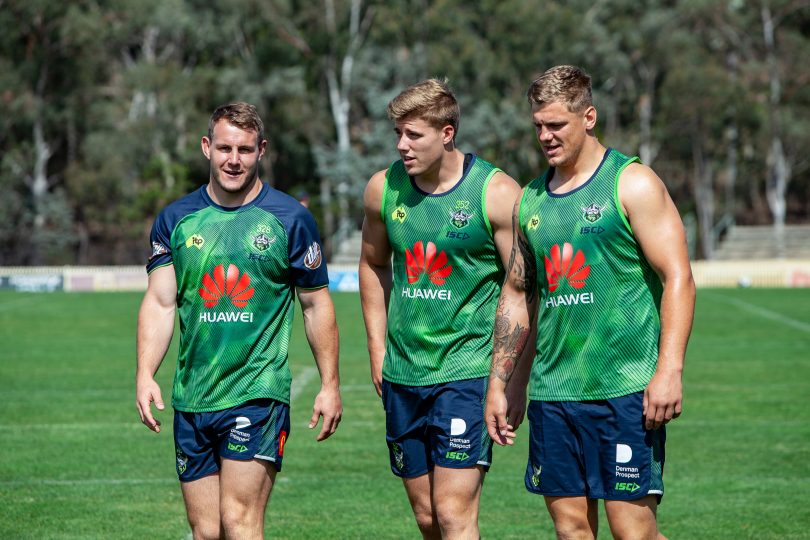 The Huawei logo has been on the front of the Raiders jersey for the past seven seasons. Photo: George Tsotsos.

Despite the United States Government’s serious spying allegations against Chinese tech company Huawei, the Canberra Raiders say they hope to extend their sponsorship deal with the scrutinised company.

Huawei has allegedly facilitated Chinese espionage operations and violated US sanctions in Iran and stole trade secrets, an accusation the company has profusely denied. There is no conclusive evidence in the public domain that Huawei has worked with the Chinese intelligence service.

Huawei is the longest serving major sponsor for the Raiders having signed with the NRL club in 2012, with the current three-year deal set to conclude at the end of the season.

The Raiders were also the company’s first professional sports partner, something the team are extremely proud of according to chief Don Furner. Furner said the club was untroubled by the US indictments and said they are interested in lengthening their contract.

“We would love to keep Huawei on board as a sponsor. They’re our longest serving major sponsor and have been a fantastic partner for us,” he said. “We will sit down with them once the season starts and open discussions about their deal beyond 2019.”

The Huawei logo has been on the front of the Raiders jersey for the past seven seasons and the two organisations have worked closely to help raise thousands of dollars for a number of charitable organisations including Tour de Cure, Bowel Cancer Australia and the Ricky Stuart Foundation.

Furner said the work in the community was one of the reasons the club wanted to sign a new deal.

“Huawei and the Raiders have worked together not only as a sponsor/sporting team but as a major community contributor,” the CEO said. “We have raised huge amounts of money from some wonderful charity organisations and have been able to work together to make positive community contributions.”

Furner said the accusations and continued negative publicity about the company had no effect on the Raiders’ decision to negotiate a new deal. When asked if the recent allegations had any effect on the club’s relationship with the company, Furner said: “absolutely and categorically not”.

“We are proud to carry their logo on the front of our jersey and our relationship has been nothing but positive from the first season they were with us until now.”

Gill King - 8 minutes ago
Something doesn't have to be attractive to be important for heritage. I understand the cinema part of the building was ground... View
Shane Wiseman - 4 hours ago
Robert Knight jetsons had quirky style. This is up there with Campbell Park for fugliness... View
Phil Ebbott - 5 hours ago
Donna Hofmeier that particular style is better represented by, and protected in buildings like the old bus depot. View
News 10

@The_RiotACT @The_RiotACT
Adopted Canberran Jack Biilmann will be at the Street Theatre on Saturday, 8 May to tour his new album, Full Circle. Opening the show will be 17-year-old Tom Dunlop, with his first-ever live performance https://t.co/FMmwlEox3O (34 minutes ago)