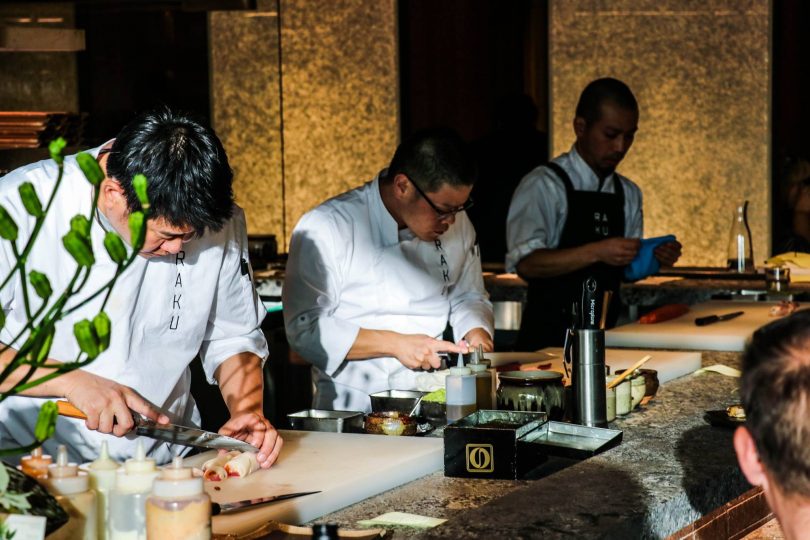 A modern Japanese restaurant in the heart of the city has been named the best restaurant in the nation’s capital at the 2019 ACT Hospitality Awards on Monday night (22 July) as Canberra’s top bars and restaurants came together to celebrate the best in the industry.

Thirty-three awards were presented for the top hotels, restaurants, cafes, bars and industry workers from across the territory with Buvette named best wine list, The Dock awarded the best sporting entertainment venue and Molly awarded the best cocktail, lounge or small bar.

Michael Nguyen from Molly won bartender of the year while Agostini’s Francesco Balestrieri won chef of the year.

We had the largest attendance at the awards in the past 10 years so it was great to have so many people from Canberra’s hospitality industry in the room,” Mr Brierley said.

“We are really spoilt for choice in terms of best restaurants and that category featured Sage Dining Rooms and OTIS Dining Hall. Raku got the chocolates at the end of the day in one of the hardest categories to judge.

“When judging an award category like that we had to make sure the criteria that we give to independent judges is bang-on. Raku, Sage and OTIS were all extremely close but I think we absolutely got it right.

“People can look at the results and agree these are deserved award winners.”

“I think sometimes we forget that Mooseheads is a great pub,” he said. “You can walk in there at midday on a Monday, get a beer, watch the racing, play a game of pool and get a steak.

“It is a fantastic pub and sometimes we think that it’s just the place you go to at 2 am in the morning. It is a ripper all-round joint and that was recognised in that category.”

Meanwhile, Doma Group took home six awards from the accommodation division with Pat Lonergan from Doma Hotels recognised as member of the year.

I should add Bar Richford as another regularly highly rated place by people who know. Is this based on the ability of places to generate social media votes?

How on earth are these places assessed? Aubergine is clearly the best restaurant in Canberra and has been judged so by SMH Good Food Guide professionals for several years. I have no interest in the place and have not eaten there for years but respect the opinions of professional critics.

I think another night at award winning Moose is in order May, Miriam, KD, Tristan, Varan

Natalie Fearon is this where we went.

Natalie Fearon ...where is this one..

Mary Fearon I think it’s the one across the road from the outdoor dobinsons. It’s newish

Natalie Fearon oh need to check it out..

Roberta Louise told you it was good!

As in the Raku Japanese place

Kate Fogarty hurry up and get that baby out ;)

Need to go when you're back Katya Golobokova

Lynne Sanders have you been to RAKU?

Lauren Rowell no but must go!

Louis Eliopoulos Raku one that I want to go to

Paul Slater we need to go to Raku

Well deserved, food there is outstanding

I was in Defence in 1990 when Moose Heads opened. I’d never heard of it. One of the girls said she liked meeting ADFA cadets at Moose Heads. I thought she meant Noosa Heads and I was wondering how the ADFA cadets could find time to travel to Noosa and pick up girls.

Peter Hyde - 46 minutes ago
Greg Myat they are for sampling the potable water supply. The samples are the taken to a laboratory and checked for quality a... View
Lexie Donald - 4 hours ago
now you know 🤣🤣🤣🤣🤣🤣🤣 View
News 22