The ACT Government has responded coolly to a call for it to create an independent building commissioner to stamp out dodgy construction in the ACT, backing the current arrangements.

It also called for an expanded audit scheme that would include random and scheduled inspections of high-risk work and a beefing up of enforcement staff.

The Committee said a rigorous audit program would catch defects before they occurred and detect poor-quality builders.

But Building Quality Minister Gordon Ramsay said the ACT already had a strong and independent watchdog in the Construction Occupations Registrar, although he did not rule out changes.

”The people of Canberra can be confident in that regulator’s current and ongoing work,” he said.

”Having said this, the Government is certainly open to ideas and suggestions that will improve the system, including additional regulatory changes. We will work through all recommendations in the report, noting that the Committee has been working on it for over two years.”

Mr Ramsay said the report re-affirmed his comments about developers and builders forcing other parts of the industry to cut corners and leave owners with the bill for faulty work.

”Canberrans should not have to chase non-existent companies for building defects while the culprit is able to wind up one company and continue to operate in our community,” he said.

The government has proposed a licensing scheme for developers and this week announced it would set up its own team of certifiers for large and complex projects. 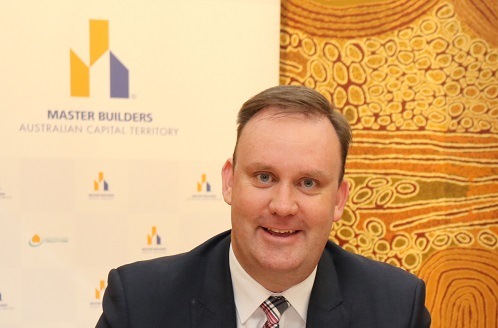 MBA CEO Michael Hopkins said there’s been a decade of lost opportunity to reform the industry.

Mr Ramsay also hit back at the building industry which has blasted the government for a lack of consultation, policy by media announcement and a failure to act on reforms.

Master Builders ACT CEO Michael Hopkins unloaded on the Minister after Mr Ramsay claimed that fundamental reforms to the building industry had been implemented.

Mr Hopkins said there had been a decade of lost opportunity, and the 43 building reforms which the government had committed to in 2015 were not complete, and the 24 recommendations of the 2018 Shergold and Weir Building Confidence Report were also still to be implemented.

He said the industry was also still waiting on a 2012 commitment to introduce a registration system for engineers.

He said the government had preferred media announcements rather than developing policy in cooperation with key stakeholders based on evidence and expert advice.

“In the middle of a national recession, it is unfortunate that building reforms are being used to score votes rather than support jobs.”

READ MORE: Back to the future: unit owners hail return of public certifiers

But Mr Ramsay said the ACT Government’s review of the Building Act and associated building regulatory system was extremely comprehensive and its actions had been strong and effective.

He said the government could not leave it up to industry to reform itself, saying its actions had been insufficient.

”Where the system can be improved, industry can and should expect Government to act. We will work with industry and the community about the ways in which Government policy will be implemented,” Mr Ramsay said.

Mr Hopkins called on all candidates for the October election to commit to urgently implement the recommendations of the expert Building Confidence Report.

“Immediate reform priorities should include reviewing and expanding the licensing system, implementing continuing professional development training for the building industry, and enforcing the minimum standards that exist in building laws,” he said.

Ransay should leave. I tried to contact him after difficulties with the Public Trustee. No answer to written communications. Eventually, after a month, I rang. I was told he’d been “too busy.” Well, Ministers are supposed to reply to communications. Not happy, Minister.

Claire Lenehan - 19 minutes ago
Helene Jermolajew Thanks! Stay safe View
TheSilver - 2 hours ago
Of course no one want to get sick, but it is part of the human experience and unavoidable. The real question is, and always h... View
Julie Kidd - 3 hours ago
Thanks for reminding us. This isn’t over. View
Opinion 6

Shirley Willis - 38 minutes ago
Sandra Zahavah Whibberley If you check my comment I DID NOT say that you vented a poisonous attack.I said it appeared the “... View
phydeaux - 44 minutes ago
Robin Bontjer, because he did not donate $4M. It was $25k, after a push from Sharapova who donated that then tagged him to ma... View
Jonny Scott - 55 minutes ago
Robin Bontjer ones good can all be canceled out when your true colors come out! View
Business 6