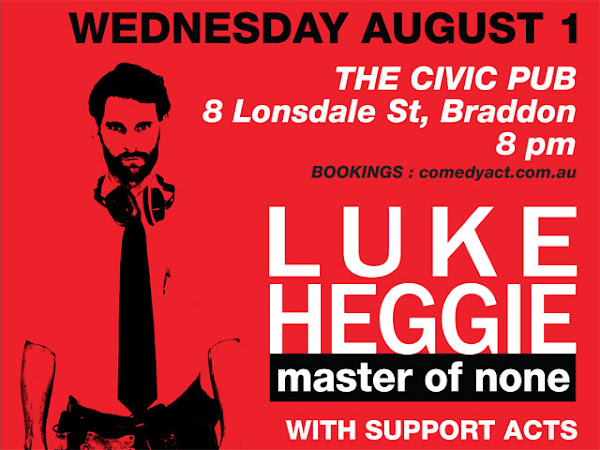 Since winning the prestigious national Raw Comedy Competition in 2010, Luke Heggie has gone on to perform at the Edinburgh Fringe Festival and on national television, and sold out runs of shows at the Melbourne and Sydney Comedy Festivals. Heggie will be performing his festival show, “Master of None”, as part of the next Comedy Club at The Civic Pub on Wednesday 1 August.

Luke Heggie has had a lot of jobs; most of them bad. He’s never stuck at any of them long enough to get promoted. Go and see his debut solo show. It’s funny.

“Last time I performed in Canberra was only a 10 minute slot at The Civic Pub as part of the sell-out Must See Comedy shows, along with some great acts like Bob Franklin and Nelson Twins, for which I performed mostly deadpan one-liners. I’m looking forward to performing at The Civic Pub again, this time bringing my full festival show which is more story-based”, says Heggie. “It’s also great that The Stevenson Experience are hosting the evening, as they are a great act and great guys”.

The show will be hosted by The Stevenson Experience, with supporting sets from stalwart Emo Parsonson, and Matt Bulman, who is a fresh face on the local scene that has been wowing audiences at open mic nights around Canberra.

Tickets $12 pre-booked online or $15 at the door. Available from www.comedyact.com.au or else take a chance on still being able to get them at the door on the night.

Bronwyn Wilson - 20 minutes ago
Where are e teacher librarians going to come from? There are very, very few in the ACT - that’s why so many schools don’t... View
Chris Cross - 53 minutes ago
Layla Barry almost $1 TRILLION and counting, courtesy of Federal Liberals, who almost scared the nation into recession with t... View
Pam Wood - 4 hours ago
Another rort in progress View
ACT Election 16

Jeff Smith - 53 minutes ago
Darron Marks The school closures in the South are not just as simple as 'the area no longer being a nappy belt'. Schools in t... View
Darron Marks - 7 hours ago
Schools being closed I would assume is a direct reflection of the change from the Southside being the former nappy belt of th... View
Evan Hawke - 8 hours ago
Darron Marks Yep, as the Government has been putting in great infrastructure in Gungahlin they have been downgrading the infr... View
Lifestyle 9

Fito Ferrari - 3 hours ago
Lake Burley Griffin should be emptied, land filled and lots of apartments built on it. View
Brent Hutch - 3 hours ago
Gloria Altinger might need to check your maths View
Tom Munro - 5 hours ago
Conrado Pengilley Nothing to do with ACT government. It’s NCA land and would be federally funded. View
Property 8