Realtime bus data on your phone by 2013! 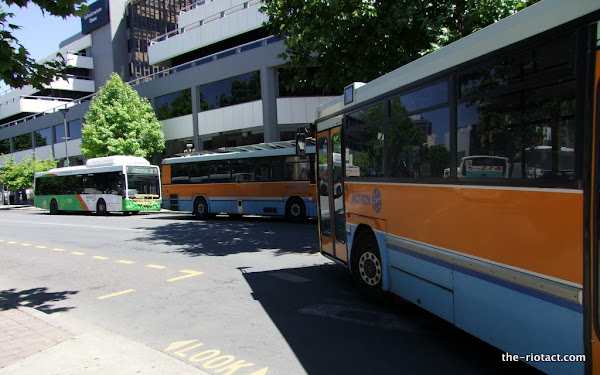 Everyone who’s ever relied on buses to get to work knows the feeling.

They’re running slightly late in the morning and start stressing and cutting things out of their morning routine to get to the bus stop on time. Maybe it’s finishing the cup of coffee, maybe it’s a quick but vital trip to the smallest room in the house, maybe it’s shaving or getting the makeup right.

But essential parts of the preparation for the day get left out to rush down to the bus stop.

Only to stand around for ten minutes reflecting on just how much they wish they’d known they had that vital 10 minutes.

today Katy Gallagher is holding out the hope we can make that annoying part of human existence a thing of the past.

Because if you can track your chosen bus’s movement on your phone (or hey for breakfast in two year’s time maybe your TV) you’ll at least know if you actually have ten minutes to spare, none, or if you’ve already missed the damn thing and can take it easy.

The new system will follow the progress of ACTION buses on their runs and provide instant information to passengers in relation to their current location and their estimated arrival time at the next stop.

“For the first time in Canberra, people will have access to real time arrival and departure information and instant access to timetables for all ACTION bus services. It is expected that schedules will be available via digital displays installed at selected bus stops, the internet, mobile phones, touch screen displays and on bus visual displays,” the Chief Minister said.

“A total of $12.5 million was allocated in the 2010-11 ACT Budget over three years to allow for the design and roll out of the system and will further improve the delivery of public transport services to the community.”

The request for tender seeks services for the design, supply and installation of the system; the provision of wireless communication for the system; and the development of mobile applications to access the live data

The ACT Government has engaged consultants KEMA Pty Ltd, who have demonstrated experience in the delivery of innovative transport solutions, to manage the implementation of real time passenger information.

“Installation of real time passenger information is expected to commence in mid-2012 with the system becoming fully operational by 2013,” the Chief Minister concluded.

And it shouldn’t be too hard to leave the scope open for light rail too.

Sure by 2013 we’d have preferred jetpacks and flying cars, but situational awareness of the bus network will do.

8 Responses to Realtime bus data on your phone by 2013!
Filter
Showing only Website comments

The best way to pick a seat on the bus is to look for one that isn’t covered in chewing gum and other assorted mystery items.

Oh look, a backwards hick town like Cairns has buses running at 11:30pm on a Sunday night. Don’t they know that modern human rights compliant cities don’t do that?

The tender description does state that this information must be displayed. It can be found at http://www.procurement.act.gov.au/tenders_advertised/tender_download/open_tenders/15419.315

If anyone would like an idea of what to expect, Cairns has recently started Real time Bus Tracking & that can be found at http://www.tmr.qld.gov.au/Travel-and-transport/Qconnect/Cairns-Real-Time/Cairns-Real-Time-Bus-Tracker.aspx

Wash your mouth out!!

You can already do that – it’s called a Taxi!

I can’t see it happening really. Unless there was another dedicated staff member on board the bus to make sure that someone who’d paid extra got their seat, you’d be relying on the driver to settle any disputes when someone refused to get out of someone else’s reserved seat – imagine the delays that could cause.

If they can get this system right, it’ll be great, and will certainly make catching the bus a less hit-or-miss affair.

Adrienne Yeo - 3 hours ago
Did I read correctly ? $390,000 redeemed even before the website went online ? Something fishy/untoward is happening. If not,... View
bj_ACT - 4 hours ago
All the money is gone. The program turned into a Bonanza for Chemist Warehouse, McDonalds and Subway. I don’t think the Vou... View
chewy14 - 15 hours ago
And the m9ney is going to be completely used up in one day. Honestly, this is beyond a joke how incompetent the ACT governmen... View
News 6

@The_RiotACT @The_RiotACT
Discover what Kent Nhan from XO and ILY loves about #Canberra dining and what's in his own pantry https://t.co/RtSwUJSBZF (9 minutes ago)