Record cattle prices give steak-lovers something to chew on 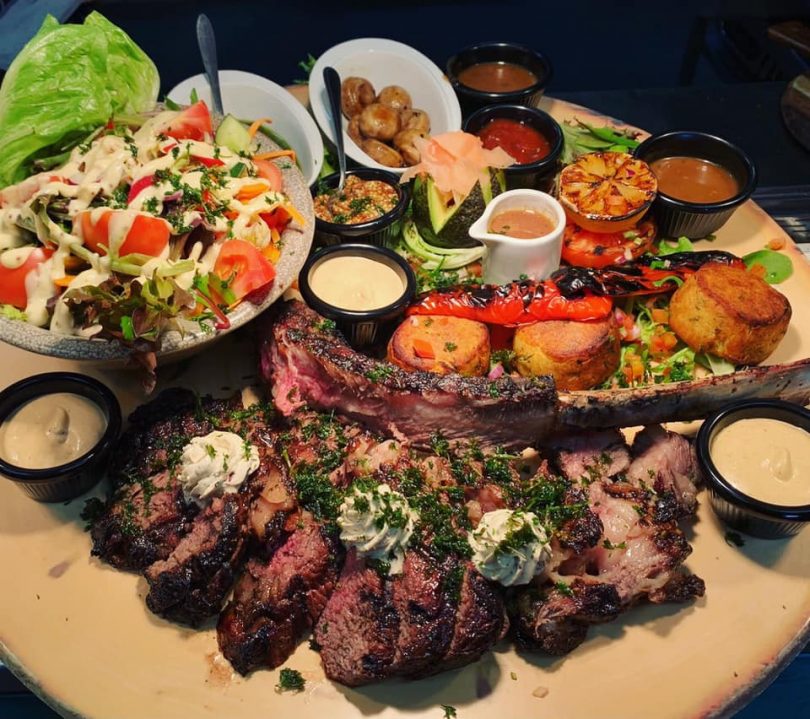 The Royal Tomahawk at Queanbeyan’s Royal Hotel is 1.5kg of meat with sides. Photo: Royal Hotel.

Record-high cattle prices mean it could soon be rare to find a decent steak at a pub, club or restaurant for under $50.

In October 2019, Queanbeyan’s Royal Hotel’s rib-eye on the bone was crowned Australia’s best steak following a nationwide search of the best pub meals.

And while the rib-eye will set you back $45 (with either salad/chips or mash/vegetables), the pub has since upped the stakes by offering a 1.5 kg Royal Tomahawk for $165, which apparently feeds three people.

The 2+ marble grade steak is basted with shiraz and garlic during grilling and served with two types of potatoes and more sides than you can poke a chip at.

Stock and station agent with South East Livestock Exchange at Yass Greg Anderson is one of many seeing a resurgence in cattle prices from excellent recent rainfall and the consequences of the COVID-19 pandemic, meaning meat is at a premium.

“Cattle prices are at an all-time high, and it seems to be going from strength to strength on the back of a bit of rain. The weaner market has dipped a bit with a few frosts, but overall, the cattle market is on fire,” Mr Anderson said.

“We sold nearly 800 at Yass this week, which is pretty good, but it’s the price that is at an all-time high. Heavy cows were $330 a head, while heavy feeder steers were $4.95 a kilo two weeks ago for steers that were up to 480 kg. We haven’t seen that before.

“I can certainly see why restaurants are paying a premium for a good steak at the moment.” 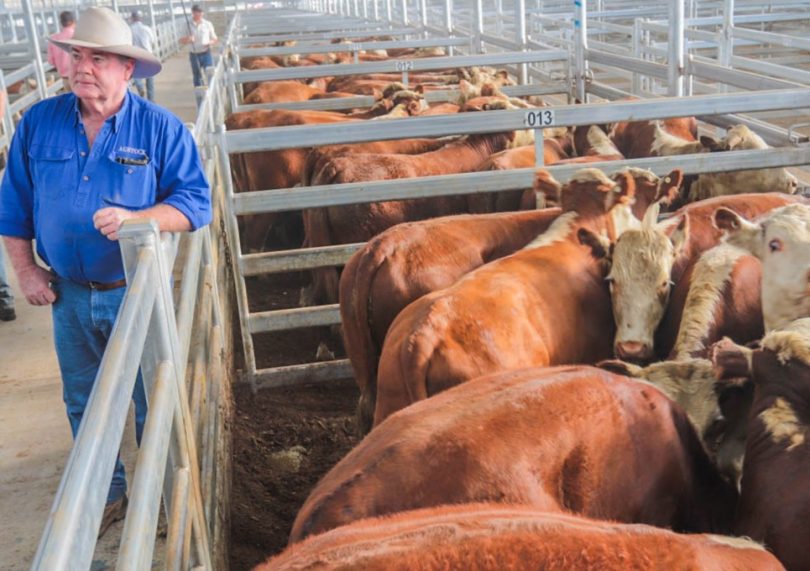 This year, the cattle herd is also expected to grow five per cent to 25.9 million head, close to its size in 2019 before the final year of the drought-induced liquidation. Live export numbers are estimated to be 750,000 head as the high Australian dollar and cattle prices put pressure on exporter and importer margins.

Low slaughter rates due to the need to fatten cattle for longer have also led to a shortage of quality beef.

Head chef at the Royal Hotel Queanbeyan, Beat Ettlin, says the Royal gets most of its meat from the Bungendore Butchery, and the region’s chefs are competing with the export market which always takes the best quality meat first.

“The big problem with our beef supply is that we are seeing a massive shortage of beef here in Australia,” Mr Ettlin said. “As with all chefs, we are constantly talking with suppliers and butchers to find quality cuts of meat.

“We’re also seeing the best cuts of beef being exported to countries such as China, Russia and Argentina, which is surprising in some aspects but speaks volumes about the quality of Australian beef.”

However, demand for a good steak remains high at the Royal Hotel, where they sell between 80 and 120 rib-eye steaks and between 60 and 80 rump steaks a week.

“The higher prices of beef mean we are also selling more pork, lamb and chicken, while looking at ways to do nice meals from cheaper cuts of meat,” Mr Ettlin said. Tomahawk steaks at Meat & Wine Co in Civic range in size from 1.5 kg and 2.5 kg each. Photo: Michelle Rowe.

Steak connoisseurs in the Canberra region can also meet their meat expectations at places like Meat & Wine Co in Civic, a designer steakhouse that offers grass-fed Angus, Shorthorn and Australian Wagyu cuts ranging from 200 grams to 500 grams.

The dry-aged wagyu rib-eye is priced by weight, so it is possible to rack up a hefty bill. Their 300-gram rib-eye is $43, while the 450-day dry-aged Wagyu rib-eye with a marble score of 6+ will grill your hip pocket at $89.

I go for snags, sawdust is still cheap.

Mudgee has one pub selling a 1.2kg tomahawk for $110 but they e had this for at least 6 months I haven’t been in that pub for a while so it might be even more now

Marty Henri .... Ummmm I'm cancelling next week's dinner date! I didn't realise it cost this much!!!!!

Elspeth Shannon Rollason - 46 minutes ago
The Florey oval which is in this picture needs to be an oval for the primary school. It needs to be fixed up so the kids can... View
Krishna Rao - 1 hour ago
Samuel Gordon-Stewart they aren't green though. Just a bit of grass in some seasons. If you want green spaces you need microf... View
Jorge Gatica - 3 hours ago
Alex Troy Elsworth Adkins dog parks are an accident waiting to happen View
Property 26

Paula Simcocks - 46 minutes ago
Marty Hoenig has had one of the best filtered water system for years. Bad about 2000 and before but now state of the ark wate... View
Motoring 3

Alex Nicolson - 4 hours ago
Albert Blair It did show the gubmint was trying to do something but I agree it seemed pretty ineffective. View
Scottie Zuxkerberg - 9 hours ago
I had no idea these vouchers were on offer, so a 100% total failure from my perspective... pretty much the usual from this in... View
News 35

@the_riotact @The_RiotACT
Eden Road is the only #Canberra region #winemaker to make this year's James Halliday Top 100 list. Here's how they did it https://t.co/IlhsfvnPQh (52 minutes ago)