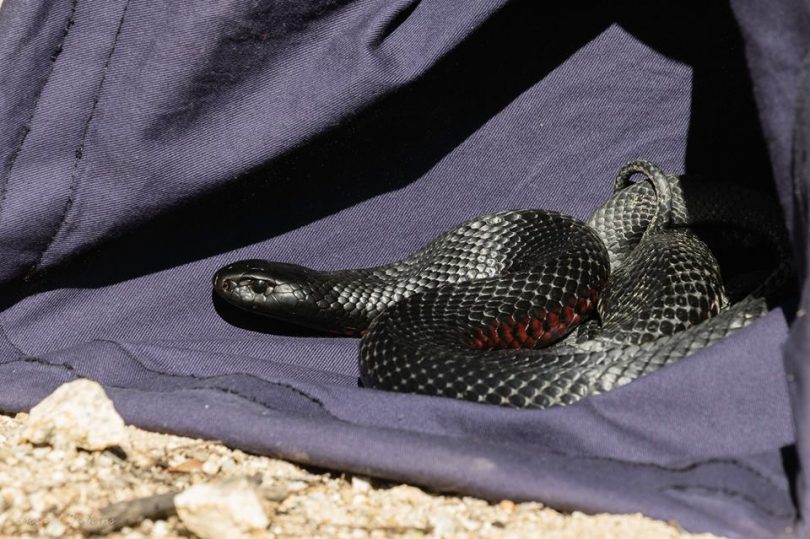 This 1.5-metre red-bellied black snake was found under a soccer kit bag in Googong and later released onto a nearby reserve. Photo by Gerard Jenkins of Canberra Birds and Wildlife.

A chance sighting of a black snake’s tail disappearing under a soccer team’s kit bag in the Googong changing rooms recently led to a surprise discovery when the snake was found to be a venomous red-bellied black snake measuring more than 1.5 metres in length.

The sizeable new recruit for the Monaro Panthers Football Club taking shelter under the kit bag inspired both fear and laughter in the team who left the snake’s fate to the experts as they carefully locked the change room doors and went on with their training.

Gavin Smith of ACT Snake Removals was called to the rescue of both the players and the snake during a busy snake season which has seen the cold-blooded reptiles raising their heads in the centre of Canberra, the front of Old Parliament House and in increasing numbers of suburban locations.

“I moved the kit bag and there was a massive red-bellied black snake under the bag,” said Mr Smith, who captured it in about 20 seconds and later released it in a nearby reserve, well away from the public. A video of its capture on February 22 is shown below while its release the next morning was photographed by Gerard Jenkins of Canberra Birds and Wildlife.

That moment when you realise your star signing for the #newseason will only wear black and red… ??? As some of you may know, I volunteer for #Wildcare (which covers NSW border area) when I can. The local #football #soccer team in #Googong got a big surprise at training the other night when they saw this fella’s tail slide under the bag in their dressing room! Who’d have thought that the underside of a #footy #kitbag would make a snug #shelter for a heavyweight +1.5m #redbelly #redbellyblacksnake #redbelliedblacksnake?!?! Thankfully they did the right thing by staying calm and getting a licensed #snakehandler to come and remove the errant playmaker to a different type of field…! ???? #rescue #rehabilitate #release #snakes #imposters #snakeyvisitors #wildlife #wildoz #snakesinthesuburbs #snakesense #snakeremovals #snakerelocations #onlyinoz #nsw #elapids Googong township Cannons Googong Googong Residents' Association Inc Googong Dam Googong Community Garden Googong Fit Yellow Belly Cafe Queanbeyan Age Chronicle

Mr Smith said the soccer team did the right thing calling for help as red-bellied black snakes are in the top 25 most venomous snakes in the world, with their venom doing “nasty things” with a person’s body tissue, muscles and the like.

“A red-bellied black snake bite is potentially fatal. It’s a very very concerning snake and not one you want to get bitten by,” said Mr Smith who nevertheless clearly admired the “absolutely sublime” snake with its beautiful colouring. 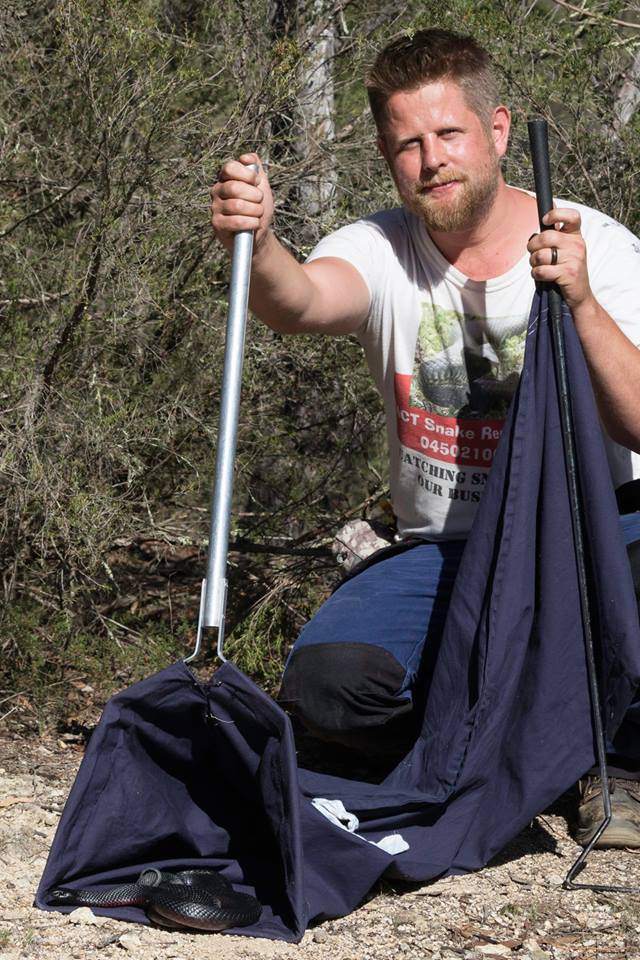 The callout was one of large numbers for Mr Smith during the recent snake season (October 2018 to March 2019) which is drawing to a close with the end of summer.

Fellow private snake handler Alex Borg of Canberra Snake Catcher has also had an exceptionally busy season and Access Canberra said it has received 168 enquiries about snakes in the last three months alone (an average of 56 a month).

“From my perspective, it’s been a very busy season – a decent bit busier than last season,” said Mr Smith.

“Lots of people are calling in just for information and education on what to do. There have been lots of callouts and interesting snake catches.” 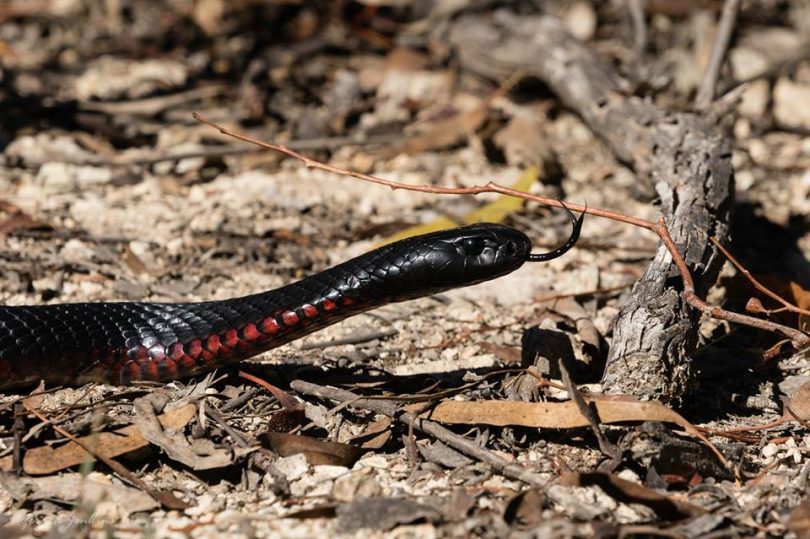 It has been a busy snake season for Gavin Smith who released this red-bellied black snake back into the wild. Photo by Gerard Jenkins.

Mr Smith attributes the increase in callouts and queries to three main factors – the weather, habitat loss and social media.

“It’s been very very dry, some of the hottest months we’ve had on record. If it’s really hot outside and dry then the snakes need to find shade and water,” he said.

“We’ve had more snakes coming into the suburbs because of that. You’re finding them in the ANU, places very close to the city and Civic. We are seeing them appearing more and more in urban spaces and residences.

“There’s also habitat loss. With all the building going on in Canberra the snakes are being displaced into the suburbs.

“And social media has played a major role in snakes becoming more visible.”

Mr Borg from Canberra Snake Catcher agreed that social media had contributed to it being a busy season, with people more likely to ignore snakes in their backyards in the past.

“The new generation of Canberrans are almost offended that they have a snake in their backyard and want to do something about it,” Mr Borg said.

“I’ve been a snake catcher for four years and it’s my equal busiest season. I think that people posting about their experiences on social media and a lot of the negativity that comes with snakes has influenced it.”

One of Mr Borg’s most special snake removals for the season involved rescuing a rare Dwyer’s snake which had become stuck in a cockroach glue trap behind a fridge in a house in Banks using a cutlery spoon, some oil, and his hands.

Mr Borg said the small snake (about the size of a pencil) is quite rare and to his knowledge, a sighting has never been recorded before in that area of Canberra. He said that the snake would have soon died if he hadn’t rescued it and he felt he was “contributing to the greater good”. A video of the rescue of the Dwyer’s snake is shown below.

This was a more delicate early morning #snake relocation in #tuggeranong. This little cutie managed to get it self stuck in a cockroach glue trap quite badly. The poor thing was stuck head and tail AROUND the leg of a fridge!!! Photos will be added The home owners did the right thing and called a licensed professional snake catcher #CanberraSnakeCatcher 0421281439 and maintained a visual but from a safe distance. I went around and safely “unglued” the little snakey. It had minor abrasions on its belly scales and a minor issue with its anal scale but after some TLC it was released into a near by bush with access to plenty of food.Can anyone guess what species this is? Don’t forget if you have a #snakey visitor give Canberra Snakecatcher a call on 0421281439 to remove and relocate any unwanted visitors #Canberranature #guesswhatsnake #southcanberrasnakes #snakecatchercanberra

Research into Canberra’s most common snake

Both Mr Smith and Mr Borg have a strong interest in snakes which goes beyond their respective snake handling businesses.

Mr Smith is the deputy head of the ANU school of sociology while Mr Borg is a forensic scientist. The two men are looking to undertake multi-sited research into the deadly eastern brown snake, which is Canberra’s most common snake.

“We want to start digging deeper into the everyday life of the eastern brown snake because they are very cryptic and mercurial and we want to better understand more about it,” Mr Smith said.

“My sense is these snakes are very misunderstood. They’ve had a very bad press for centuries.”

A mate of mine has a pet one. I like them. The eat brown snakes

Watched one swim right by me when I was swimming in the river with my golden…..for a minute my dog thought it was a stick!.
Lucky I grabbed his collar!!. (At the cotter)

Wow you CAN’T mistake it for any other snake its colour seem to GLOW. So guess that’s not the new Mascot. 😲

Awesome close up on the head. Nice shots

It was out looking for you Neilio x

Greg Part we have had a bumper snake season 🐍

Greg Part what time and what was the temperature?

Interesting I’ve found these articles ,things have certainly changed from my childhood in the sixties living in country NSW ,my pregnant mum stepped on a tiger snake in the veggie garden and was 7months pregnant with my baby brothers lived half an hr from the hospital, good news was we knew what the snake was ,did all instructions within the snakebite kit ,all so wrong these day 🤭I was 8 and followed my mums instructions,as she read it out step by step to me . Today I can still remember all of that day and visiting her in hospital ,2days b4 Christmas in 1963 , my dear brother was born in 1964 all good however he only gets a Birthday every 4 yrs ,that dam snake 🤭🤭maybe deprived him of birthdays ,he’s a leap year fella 😘💕munched loved buy his 3older sisters

Shona N Peter Prince would not want this experience 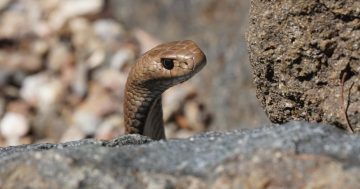 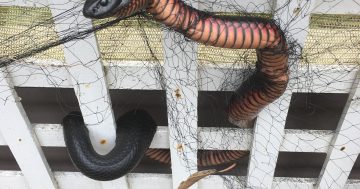