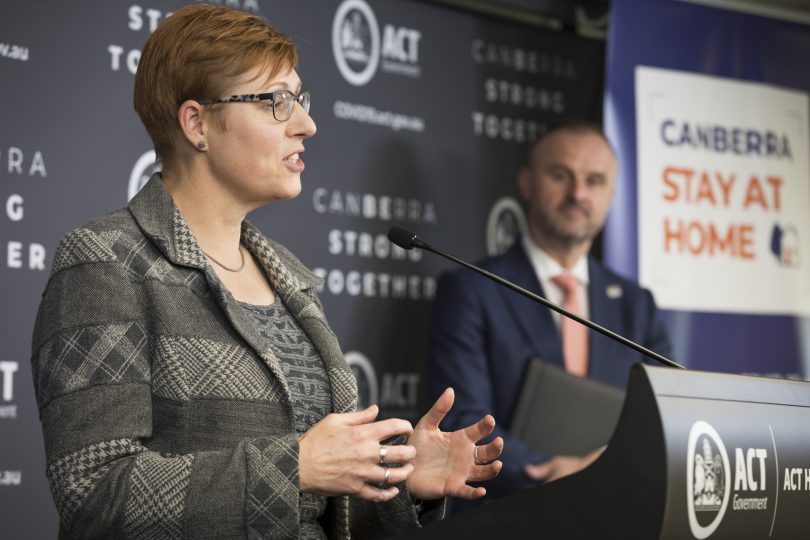 After a troubling independent review last year into bullying, harassment and workplace culture in ACT Health, the review’s author has handed down a report identifying some progress in changing the culture, but also some areas where fundamental change has stalled.

Michael Reid and Associates, which has undertaken health and science projects throughout Australasia, the Pacific and with UN organisations, carried out last year’s major review and Mr Reid also chaired in the Independent Review Panel.

His first annual report says that, on balance, there has been considerable progress in implementing 20 wide-ranging recommendations following the review.

But Mr Reid also found that the whole-of-system recommendations about workplace culture have not progressed at the same pace, and this work will require increased focus during the next year.

Only six of the 20 recommendations were fully on track, and a key recommendation to implement a program across ACT Health to reduce workplace bullying has not been actioned. Recommendations to improve doctors’ engagement and participation in strategy and policy initiatives have also not progressed.

The ACT Government has previously been criticised for its secrecy around problem areas in the ACT’s health system after last year’s review received almost 400 submissions and more than 1900 responses to a staff-wide survey. The final report identified levels of bullying in the health system.

A separate Canberra Health Services survey, launched last November, also found that 46 per cent of the more than 4000 respondents had been exposed to occupational violence in the last 12 months, while only 44 per cent believed that if they were to report a colleague for bullying or harassment that it would be appropriately managed.

The ACT Government was forced to release the results of that survey after a hospital staff member passed it on to the Canberra Liberals who subsequently made the survey public at a press conference at the Canberra Hospital.

The government has since pledged to be as transparent as possible.

The report shows the best results are coming from areas that are in the control of the individual arms of the health system: the ACT Health Directorate, Canberra Health Services and Calvary Public Hospital. ACT Health says that the results show it is “moving in the right direction” to improve workplace culture for the Territory’s health workers.

Health Minister Rachel Stephen-Smith said Mr Reid’s report highlights a marked shift in a number of areas across the health system, along with a number of improvements.

“I am pleased that this report has confirmed we are heading in the right direction, but I know there remains more to do. Cultural change takes time and requires sustained effort over several years.”

She said the annual review of the Implementation of the Culture Review is an important mechanism to verify progress and identify areas of the cultural review implementation that require further development and focus.

“This report will help the Culture Review Oversight Group to better understand the impact of work so far across the three arms of our public health services – the ACT Health Directorate, Canberra Health Services and Calvary Public Hospital.

“I am pleased to say that nearly all of those who were interviewed for this review thought that progress to date has been generally effective, given the relatively short period of time since the Culture Review was finalised and implementation commenced.

“Across the ACT public health system, we remain committed to achieving real cultural change, and I look forward to continuing to work with system leaders, staff, consumers and all stakeholders to deliver on the full intent of the Culture Review.

“I thank everyone across the ACT public health system for their commitment to developing initiatives and approaches to support positive culture change, recognising that this will benefit the entire health workforce, as well as patients and their families and carers,” Ms Stephen-Smith said.

Unfortunately people keep voting them back in. 😭😭

16 years ago they got elected in part because they knew how to fix the problems with ACT health. Set the bar low, and consistently failed to reach it.

Binalong The Old Produce Store - 3 minutes ago
Thank you for the fabulous shout out Michelle of the wonders of the Yass Valley! With a mantra of Australian Made, The Old Pr... View
Daniel Witteveen - 2 hours ago
Yep! They have an amazing park there too. View
Karen Baker - 11 hours ago
Helen Weldon looks good View
News 2

Susan English - 19 minutes ago
Sue Skinner yes it has been one of our favourite restaurants for many years! Amazing views and food. View
Margaret Stamatis-Everett - 52 minutes ago
Catherine Denice , did Uncle Jimmy see this? View
Sue Skinner - 2 hours ago
I never knew that this existed! Susan English have you seen it? View
Breaking 2

chewy14 - 1 hour ago
Because they were keeping supply mainly centralised early on because of the efficiencies of doing so with a limited supply. N... View
Community 1

chewy14 - 1 hour ago
So any NIMBY issue is just going to get an uncritical article now where they can claim whatever they want? I heard that the q... View
Opinion 13

Joshua Grech - 1 hour ago
ACT gov partners with Virgin Australia to diversify transport as aircraft movements between sydney and Canberra are an easy e... View
Jack Horne - 10 hours ago
Charlie Karmenu Flask must have been with Hellstra in the aluminium lined carriages and metallic glazing that stops 5g emissi... View
News 9

Acton - 2 hours ago
The UC says international students continue to study online and are doing well. So there is no need to risk the health of Aus... View
Michael Cameron - 4 hours ago
Shawn Mulgrue 1st..YES! View
Mandy Savery - 11 hours ago
How about delivering on campus for the students that are here? Or even delivering lectures live online instead of videos from... View
Opinion 11

Emma Jane - 10 hours ago
Gretchen there’s really only two options, either wfh all the time or bring her to work. View
Jack Horne - 11 hours ago
Retire... View
Food & Wine 26

Kristy Lee Morrison - 11 hours ago
Ken McInnes Used to go for coffee there in the mornings on a walk and they’re always so friendly 🥰 Great family business... View
News 30

Tom Porter - 12 hours ago
Nick Savino can you counter the report. View
What's On 2

The head of an electronics store has been sentenced for stealing almost $60,000 from his employer. The agreed facts in...
Property 17

As Canberra's skies continue to fill with cranes, and whole town centres such as Woden and Belconnen are renewed, it...
Property 17

@The_RiotACT @The_RiotACT
The Wollondilly River and Mulwaree River flow through Goulburn, sustaining life for millennia and bringing peace and tranquility to the city https://t.co/rAHZDEMvOb (2 hours ago)

@The_RiotACT @The_RiotACT
Would more flexible working hours sort out our traffic congestion? And can your boss tell you what to wear to work? Here are our slightly surprising poll results https://t.co/bzFvQqFbLG (12 hours ago)