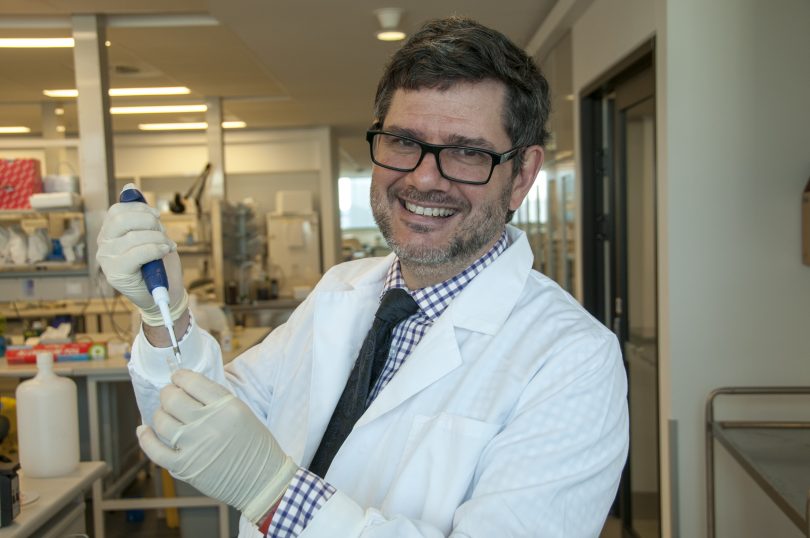 A new partnership will give hope to ACT sufferers of rare and incurable cancers, with the possibility of innovative and targeted therapies being made available.

ACT Health’s Canberra Region Cancer Centre will team up with world-class research institute the Garvan Institute of Medical Research in Sydney so ACT patients can participate in clinical trials of cutting-edge personalised treatments.

The Molecular Screening and Therapeutics (MoST) clinical trials match novel therapies to rare and less common cancer patients with ‘incurable’ tumours based on their individual molecular and genetic makeup.

Minister for Health and Wellbeing Meegan Fitzharris said the ACT Government would contribute $436,000 over three years to the trial.

“About 30 per cent of cancers diagnosed are rare and less common cancers, and many are currently incurable which means they result in 50 per cent of all cancer deaths,” Ms Fitzharris said.

“Under the trial, eligible patients being treated at the Canberra Regional Cancer Centre will be able to have samples and information submitted to the Garvan Institute for analysis and have potential therapies identified.”

Any person with advanced cancer for whom there is no standard treatment remaining will be eligible for the trial but they must also be well enough to be treated with an experimental agent safely.

Ms Fitzharris said the ACT medical community would also benefit from collaborating with a world-class institution in improving patient health outcomes and in attracting high-quality clinicians to the ACT.

The research would initially be conducted by medical staff already based in Canberra, but having cutting edge ongoing medical research based in the ACT helped to attract new researchers to the Territory.

The MoST project uses molecular and genetic analysis of tumours to identify optimal therapeutic targets for patients without treatment options.

New drugs are becoming available which are specific to these therapeutic targets. This leads to higher response rates, fewer side effects and better outcomes than traditional methods.

Close to 100 patients are expected to be recruited for the trials, which will commence early in 2018.

Head of the Cancer Division at the Garvan Institute, Professor David Thomas said the Genomic Cancer Medicine Program provided access to precision medicine for patients with incurable cancers, and particularly for those many Australians affected by rare and less common cancers.

“Over the past 12 months, more than 60 patients have come from outside NSW to take part in the program. We are really delighted to be able to work with the ACT Government to bring this program to help patients closer to home,” he said.

The MoST Trial was officially launched by the Garvan Institute and NHMRC Clinical Trials Centre in Sydney in August and is available for patients nationally.

Stephen Saunders - 21 minutes ago
Look, I don't oppose this, it can never be remembered too often. But the first priority that needs it own Canberra memorial i... View
News 17

chewy14 - 24 minutes ago
Ha, that should read uninformed, not uninformed. BJ, on that link you've provided, have you actually read the ICRC report on... View
chewy14 - 41 minutes ago
No, To be honest, It's because I think you're uniformed on the scope and causes of the problem, the research that has been oc... View
bj_ACT - 2 hours ago
I’m not just criticising this project from 2014, I’m criticising two decades of broken promises, failed projects and the... View
News 199

Jess Thomas - 27 minutes ago
David Deb Cossart that's the thing: people who can afford the fine can afford to speed. Changing this would mean that no-one... View
Liam Searle - 1 hour ago
Make the speed limit suit the road, change it back to 60! View
AliciaAnn Dowd - 4 hours ago
Werner Schenk I agree with you. There is already a system in place to assist people manage payment of their fines. SPER allow... View
Community 41

Sam Oak - 48 minutes ago
The government needs to stop fluffing about trying to figure out how to get the tram over the lake and build the Belconnen to... View
Community 10

@the_riotact @The_RiotACT
The announcement of a new national Holocaust #museum in #Canberra comes in the wake of a report that reveals almost one in four Australians over 18 has "little to no knowledge" of the #Holocaust https://t.co/ojjuaIjCrz (44 minutes ago)