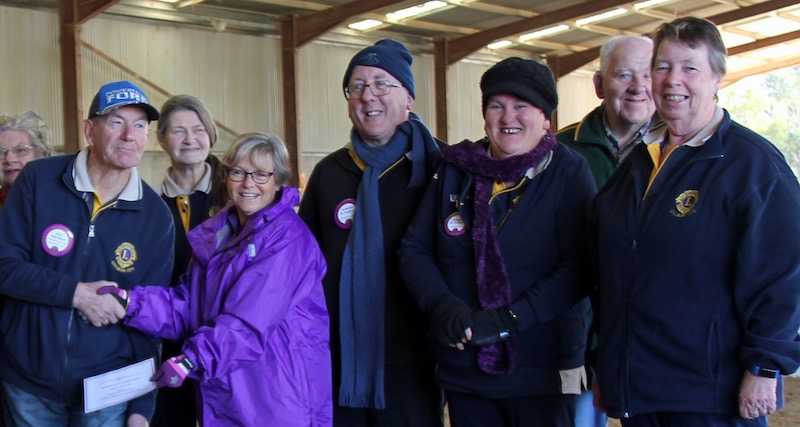 Goulburn district ex-school teacher and charity worker Rosemary Chapman has a positive message in troubled times: this is when communities come together and that shared strength will see us through.

The incoming president of the Lions Club of Goulburn City is currently hard at work on a project to collect unused tools and pass them on to Southern Highlands fire survivors and wants to make the larger point that charity is about more than donating money.

As coronavirus puts charities and their supporters under more pressure, Rosemary believes it will build resilience among people to get over setbacks and move on with their lives. And she believes the Goulburn community’s generosity at all levels will play an important role in that process.

“These are things I tried to teach at school: what can you do for some else?” Rosemary says.

Her 42-year career began in Sydney’s west before she moved to the Southern Highlands and finished as principal of Windellama Public School.

That was 12 years ago. The experiences over 15 years at the small bush school near Goulburn sustain her optimism. They include sparkling moments, like the happy-go-lucky kid who said to her one morning at school: “I thought I would ride my bike down to the bus stop, and rode through the cowpat. I am wearing my sister’s trackies, because she had a spare one.”

Rosemary shared her interest in photography and computers with the children. There were lots of cameras and Year Two boys maintained the school’s web page.

“I am a bit sad about the education system at the moment, I don’t think we are quite catering to enough kids and giving them enough fun or real-life skills,” she says. Each year children produced a video, and added to it in successive years.

The joy was shared. Recently a man in his 20s whom she taught at Windellama told her: “I was allowed to follow my dreams with what I wanted to do and wasn’t put down because I had different dreams.”

The Lions Club is a mainstay of community support, but Rosemary says the club’s traditional supporters in small business have battled through the drought and smoke from the bushfires, and will suffer more trading setbacks due to the social distancing regime to slow the spread of COVID-19.

And Rosemary points out that it’s not only those who receive who benefit from a generous spirit.

She recounts a 2019 Christmas toy appeal, supported by Radio 2GN and the NSW Police Academy students, and charities including Can Assist which helps country kids affected by cancer. A Can Assist woman helping out was moved to tears after selecting a little pushbike for one of five children who had lost their father to cancer before Christmas.

“She was able to give them a present each, that was really nice, not only the little kids, the big kids got presents, too,” Rosemary says.

“I felt we had done something really useful collecting and giving out toys. It is very powerful to think we could see the response, whereas often we give out things and have no idea of the reaction. This was closer to us.”

Now in a club where a quarter of the members are women, Rosemary likes working alongside people from different backgrounds, and the different way men think.

“Shane Fitzsimmons [NSW Rural Fire Services commissioner] said the people who work on a fire truck are from all different backgrounds. No employer would be able to get those skills or backgrounds in any one job. Lions clubs are the same,” Rosemary says.

This week she has been working with other Lions members collecting tools sitting idle in sheds around Goulburn. They will be given to the Wingello Progress Association, and distributed to people in the Southern Highlands village who lost homes in the recent bushfires. The gesture is another reminder that charity need not always rely on money.

To find out how you can get involved, visit the Lions Club of Goulburn City.

Elspeth Shannon Rollason - 26 seconds ago
All these buildings. If families move here then where are the playgrounds for kids to be active? What is being done about saf... View
Zahidul Alam - 14 hours ago
Timmy Holness so true. Builders and developers who are related to the planners 😂😂😂 View
Ian Brown - 14 hours ago
Belconnen harbour View
Opinion 132

May Agnew - 2 hours ago
MOST DEFINITELY -so many homeless -a national DISGRACE -and wealthy developers becoming wealthier still - causing a concrete... View
George Watling - 7 hours ago
A recent OECD review of 300 Urban Planning studies from across the world has demonstrated that increasing the compactness of... View
George Watling - 8 hours ago
This story is not based on evidence or research. Higher density planning policies have been driving up property prices around... View
Community 7

chewy14 - 9 hours ago
And the m9ney is going to be completely used up in one day. Honestly, this is beyond a joke how incompetent the ACT governmen... View
News 18

Lauren Kay - 10 hours ago
I was gutted when I found out Ash. Nigel was so lovely and it feels like I knew him forever. View
Ashleigh McHugh - 10 hours ago
Lauren Kay isn’t it so sad... View
Lauren Kay - 11 hours ago
Drew Forrest I've got a condolence card, but happy to put more cards in a larger envelope if you or anyone up your way wants... View
News 6

@The_RiotACT @The_RiotACT
Photographer Sammy Hawker's engagement with the environment has created beautiful images that use salt water, rain and earth to evoke a changing world https://t.co/9oVmYTwl62 (9 hours ago)

@The_RiotACT @The_RiotACT
Loveable goofball Rocco and sweet rabbit Waffle are waiting to find their perfect match. Think that could be you? @rspcaact #PetsoftheWeek https://t.co/RqlUzgo7Dg (10 hours ago)

@The_RiotACT @The_RiotACT
The owner-builder of this dream home designed it for his family. He thought of everything, down to the last detail - and it shows https://t.co/HCmMwgOhgf (11 hours ago)