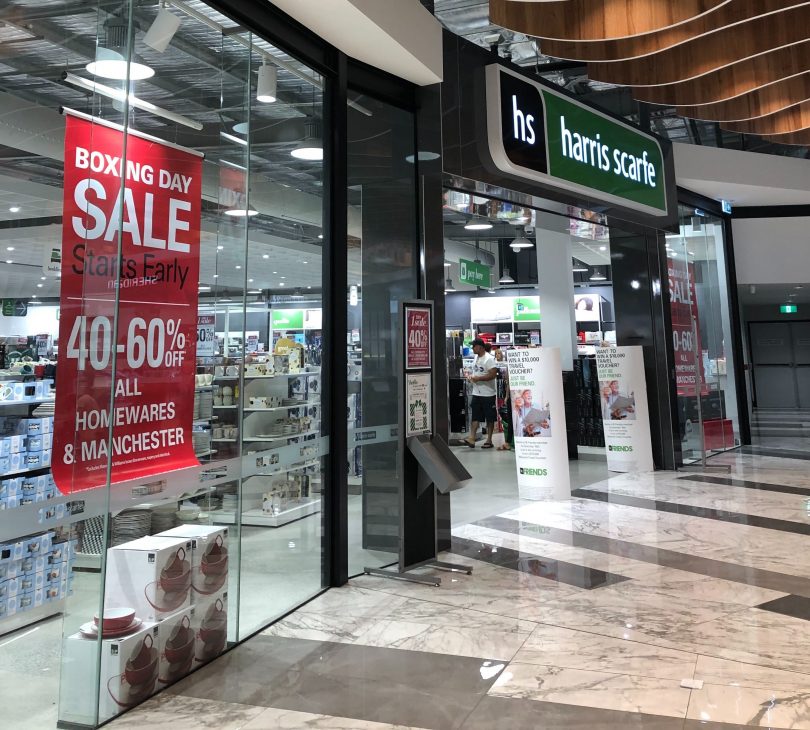 National home goods and apparel retailer Harris Scarfe, which has four stores in the ACT, has been placed into receivership and will immediately go on the market to be sold as a going concern.

The news could not come at a worse time, two weeks before Christmas, for its 1800 staff nationwide.

The secured lender to the group appointed Deloitte Restructuring Services partners Vaughan Strawbridge, Kathryn Evans and Tim Norman as receivers and managers over Harris Scarfe and a number of associated entities after the retailer went into voluntary administration.

Mr Strawbridge said in a statement that trading would continue as normal over the Christmas period and employees will continue to be paid by the Receivers.

He also said he was confident assets were more than sufficient to meet all employees’ entitlements and the receivers intended to sell the business as a going concern and preserve as many jobs as possible.

The receivers will honour gift cards and lay-by deposits in full.

“Harris Scarfe is a longstanding retail institution,” Mr Strawbridge said. “We will be making every effort to secure a future for the business and intend to commence an immediate sale of business process.”

Store managers and staff have been told not to comment.

The union representing Harris Scarfe workers said the announcement came without warning and staff were shocked.

SDA National Secretary Gerard Dwyer said the union was deeply concerned at the news, which came only a month after private equity firm Allegro Funds acquired the retailer.

“It is yet another reminder that private equity companies have no long-term interest in retail and the employees in our industry – first Myer, then Dick Smith, now this,” he said.

“The SDA demands that the receivers demonstrate how they plan to live up to their assurances that Harris Scarfe workers will be paid in full as stores continue to trade through the peak Christmas period.”

He said the union would file a dispute with the Fair Work Commission over the company’s failure to consult with the SDA prior to the announcement.

“Just as importantly, SDA is seeking urgent consultations with the receivers to guarantee that there are in fact sufficient funds (as Deloittes have stated) to meet the legal entitlements of all employees,” he said.

We are planning to come down for the Folk Festival over the Easter weekend next year. However if there’s a big cyclone this year might see you earlier

Rebecca Beecham bring on the sales

Are you heading to the Berra ???

Amazing, I only heard of the name of this shop a few months ago. Just shows I'm not a huge shopper. Also, I don't shop in the places where the Canberra shops of this chain are located.

Hope I can get a bargain!

Oh no Melany! What will you do without the hairy scarf 🧣?

Another victim of the retail apocalypse. David Jones, Myer, EB Games, and Harvey Norman are all on death row as far as I'm concerned.

Some of their current stores look rather large, so there may be options to downsize and save rent, like Myer at Belconnen.

Phillip Hai Nguyen stock up on the air fryer 😂

“A pity for those who lose their employment, maybe a rethink is needed re. what the jobs of the future are going to be.”

And what is your job, Renea? Disruption proof is it?

Alex Brown time to buy up!!!

Lovely unpretentious shop in Dickson with cheap parking nearby. I hope it will survive. My go-to for manchester and cheap clothes, plus some kitchen gear.

“”you can buy everything cheaper online and with way more choices””
Have tried it. My neighbour is grateful. Shoes I got were too small, ditto a jacket.

Why would people expect a store like this to survive when you can buy everything cheaper online and with way more choices ?? Bricks and mortar can’t match convenience and range.......

Ben Garden but you can’t try it on before you buy when it is online!!!

Jake Ingram time to stick up on wine glasses

Robert Knight - 22 minutes ago
Gill King oh, I get it. I grew up here and spent many a weekend night watching movies there. I understand it’s cultural val... View
Virginia Dodson - 2 hours ago
Let’s hope it’s heritage listing has more credibility than that of Anzac Hall at the War Memorial. Terrific that an inter... View
Gill King - 3 hours ago
Something doesn't have to be attractive to be important for heritage. I understand the cinema part of the building was ground... View
News 12