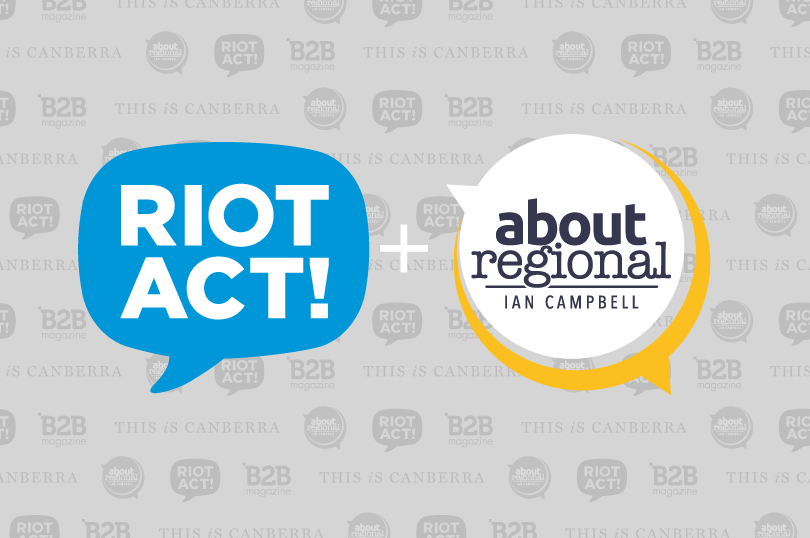 Canberra digital news and opinion platform The RiotACT (the-riotact.com) continues to build influence and momentum, finalising the acquisition of About Regional, an emerging storytelling platform from South East NSW.

The move is another solid step in The RiotACT’s ambition to become the primary source of digital regional news for people in Canberra and its surrounds.

Over the last two years, Ian has built a dynamic and engaging online news presence that is offering new depth and opportunities to the Eurobodalla, Bega Valley and Snowy Monaro regions.

“The RiotACT is on a mission to cover the local issues that matter, and Ian’s values and track record fit nicely. We look forward to empowering the communities he knows so well,” Tim says.

“Those connections between Canberra, the coast, and the Snowies are well known, having Ian come on board adds a new energy to that and adds to the growing formal networks being laid down through local and state government, tourism, business, and education.”

About Regional will continue to evolve and build its own online presence under The RiotACT umbrella, with relevant stories from Batemans Bay, Bega, Merimbula, Cooma, and Jindabyne also finding a home on The RiotACT platforms.

Ian Campbell says he is excited by the potential this partnership represents to the communities of South East NSW.

“I am really looking forward to working with The RiotACT owners Michael McGoogan and Tim White to map out the future of About Regional,” he says.

“Michael and Tim are well-known to the Canberra business community. Their reputation and success with companies such as Allhomes and Uber Global speak for itself, it’s onward and upwards for About Regional.

“I am hooked on their vision to revolutionise digital regional news, we have a shared passion to see local news succeed and prosper.”

Since taking over The RiotACT in August 2016, Tim White and Michael McGoogan have built the site into one of Canberra’s leading digital news and opinion outlets, with more than 150,000 unique website visitors each month.

Tim White is the former CEO of Allhomes and the driving force behind its $50 million acquisition by Fairfax in 2014. Michael McGoogan is a serial tech entrepreneur and the founder of UberGlobal, one of Australia’s largest cloud service providers which was acquired by MelbourneIT for $15.5 million in 2015.

Michael says the acquisition of About Regional is unlikely to be their last.

“Since acquiring The RiotACT in August 2016, we have onboarded a number of significant new commercial partners with whom we are piloting some very interesting new digital media and data-driven business models,” he says.

“The RiotACT is actively seeking to acquire additional media assets to both expand its geographical footprint and increase our content depth.

“I am looking forward to working with the people, businesses, and industries of South East NSW to secure a prosperous and colourful future for all involved.”

What an exciting venture Ian, how lucky is RiotACT! Also a brilliant opportunity for Snowy Monaro to connect and share more with her sister, the ACT.

Congrats on the acquisition 😄

It’s day 2 in The RiotACT office – coffee is good! Canberra, the Coast, and the Snowies are old mates, looking forward to building on that – sharing stories, having fun, helping things happen. Cheers Ian