Rotary and friends resolve safety risk outside school in Goulburn 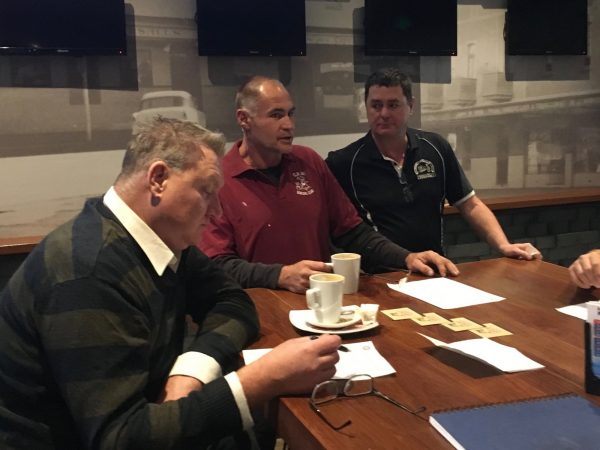 The Rotary Club of Goulburn Argyle has enlisted small business operators to give the Crescent School in Goulburn a safer car park. Before and after school cars, buses and people mix in the school’s car park, at risk of an accident.

President Mick Cooper says in future a solar-powered boom gate will restrict buses entering the car park to one at a time within the access area.

Cars will have a shorter, more direct access and egress to the car park, and three flag poles and new shrubs will create a natural barrier to discourage people from taking a short cut through a garden beyond the car park.

Planning, labour and materials are worth about $30,000, but actual costs are minimal thanks to volunteers, including tree and earth moving contractors.

Mr Cooper says the people providing skills and equipment, who are not members of Rotary are typical of many businessmen who would like to help Rotary, but at the end of a busy day want to be at home with their families.

So they have joined a regular breakfast meeting for about an hour before work, where community projects are planned.

As well as 18 members, Argyle Rotary now has an alliance with the small business community. Among the non members is Aaron Meylan, who disposed of about 30 dieback-affected eucalypts and pine trees around the Crescent School car park.

“People like Aaron from Aaron’s Tree Removal and John Fitzgibbon from JFC Contracting, they are all interested in Rotary but have not got time to be there weekly. So they become Friends of Rotary,’’ Mr Cooper said.

“We can put our hands to most trades through a Friends of Rotary group that we have formed. We meet with them on Tuesday mornings once a month, instead of a regular Rotary meeting at night,’’ he said.

“A lot of retired people go to Rotary. Tuesday nights is no problem to them, but Tuesday night for people who work all day, haven’t seen the family, there’s a problem,’’ Mr Cooper said.

A Friends In Business network, including Kylie Isbester, Shaun Carnes and Jacquie Howard joined the breakfast and networking this month.

The club and friends have re-coated decking and refurbished seating for the Crescent School, and built a herb and flower garden, play area stocked with pots and pans that the kids bang together to make a noise. They have built a sandpit and will cover it later with a shade cloth.

Goulburn Pre-School is making the most of Rotary being in the neighbourhood, and its cubby house will receive a facelift from the Friends of Rotary group.

The club donated more than $23,000 to educational, health and international causes in the past year and has elected Mick Pearson 2017/18 president.

Geoff Langridge - 38 minutes ago
lets go off science not some woo-woo idea that plants could be more sentient because we apparently "dont understand them". If... View
Henry Rocek - 38 minutes ago
Gawd, after reading all these comments I’m off to KFC! 😂 View
Dean Newman - 53 minutes ago
Geoff Langridge It is all relative. Put some fish in the blender or some oat grass. Same thing, both are living. A stab to a... View
Business 7

Archie Mac - 6 hours ago
My uncle told me in climbed the fence as he couldn’t afford to pay. Said he walked in just in time to see Bradman walking o... View
Louellyn Violet - 17 hours ago
How about the Giants playing in the snow? View
Andy N Bev Esler - 1 day ago
you could clearly hear from the boundary Brian Stratham, the bowler who bowled out the Don for 4 runs, appealing for a No Bal... View
Business 2

Lucian Burca - 14 hours ago
Elizabeth McLennan in the last 6 years while I was flying with Qatar and Emirates it was metal cutlery on board. View
Andrew Dale - 18 hours ago
Probably more actually. It's $10 for 1000 plastic forks. I think it $40 - 50 for wooden forks. Oh well we will all have to in... View
Julia Ross - 19 hours ago
Nick James funny, so's mine. View
Opinion 4

@The_RiotACT @The_RiotACT
Dargues Gold Mine near Braidwood will soon have new owners, as issues with noise + deteriorating roads continue https://t.co/Bx60Ezu4Z2 (23 minutes ago)

@The_RiotACT @The_RiotACT
Defence has confirmed it did not radio the location of the Orroral blaze to the ESA immediately as radio traffic focused on the crew's safety https://t.co/roYKCgXfeZ (2 hours ago)