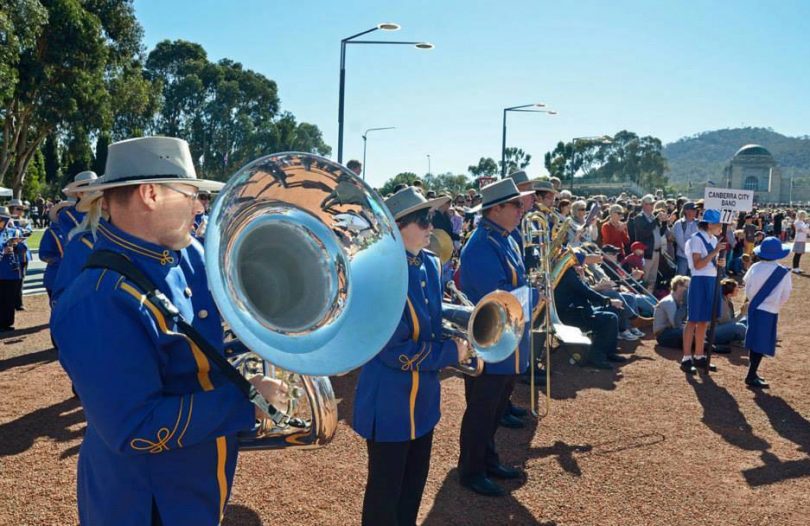 RSL Canberra has given the ACT’s community bands their marching orders from this year’s Anzac Day ceremony, telling them that their services are no longer required.

The move has upset band members, with one feeling gutted, after performing with the Canberra City Band on every Anzac Day since 2005, and at ceremonies in France.

RSL Canberra President John King has told bands in a letter that the veterans organisation had requested the Australian War Memorial trial a new audio system designed to resolve issues with the march music.

“You will appreciate that for many years there have been issues with the march music, including inconsistent tempos and audibility, that have been a concern to our marching veterans,” Mr King wrote.

He said the ‘Delay Stack’ system would provide a synchronised transmission of the music performed by the Royal Military College Band from its position on the AWM Memorial Parade Ground along the length of Anzac Parade.

“The unfortunate consequence of this change is that your band will not be required to perform for the marching contingents on Anzac Day this year,” Mr King said. 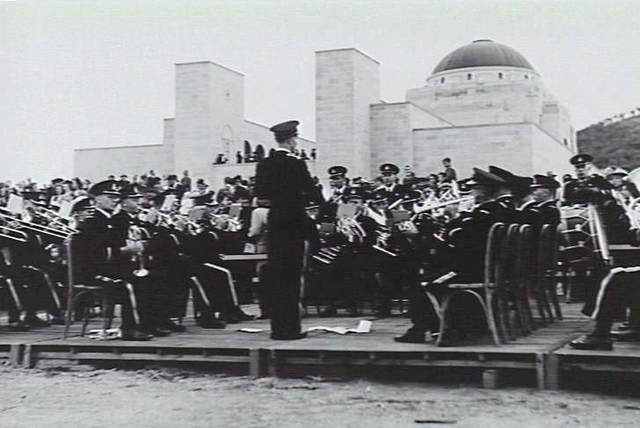 Mr King told them their contribution had been significant and appreciated over many years and greatly appreciated by veterans and spectators, and thanked them on behalf of the AWM and the RSL.

Canberra City Band president Stephen Halliburton said the decision was disappointing and taken without any consultation.

Former Army reservist and Canberra City Band bass trombonist Simon Mitchell said the bands had not been approached to address the RSL’s concerns.

“There could be issues when the march actually starts, the different timing, different speeds, but it’s not as if the veterans are on the parade ground marching, they are a little bit out of practice,” Mr Mitchell said.

He said people at the march had told the band members how much they appreciated their contribution, and that music was his way of paying his respects to serving members of the Defence Force and veterans.

“I’ve toured to France and played with Canberra Brass and I’m doing it again in September-October. I’ve played at Villers-Bretonneux. To be locked out of my national ceremony without any ability to address the issues that might have been experienced is gut-wrenching,” he said.

Do you think the decision to remove community bands from this year’s Anzac Day ceremony is fair? Share your thoughts by commenting below.

Why do people insist on bagging Canberra? Canberra did not make this decision the RSL did.

Disgraceful. They should just turn up anyway and do it.

It's Anzac Day, not battle of the bands.

I'm inclined to think this is part of a bigger picture to slowly reduce the size... more likely, reduce the community involvement and national importance of this commemoration. Think about how the focus on Australia Day, Mothers'/Fathers' Days, Easter, Christmas and other community events are being eroded and dismissed! A few people have commented on their intention 'not to go', 'step back' or 'give it a miss'...I think this would be a huge mistake and would be the first steps towards another tradition being lost. I fear the political correctness activists will use the reduction in attendance as a lever for yet more change.

Foolish. A march without martial music is a walk and you are tempted to just walk away...

Such a great shame ! This was What I thought Anzac was all about to remember our fallen soldiers respect but why cut out the bands ! It’s Anzac Day for goodness sake ! The soldiers just love the old marching songs ! I love brass bands bag pipes ! I will go to Sydney watch the parade !😟

Bands should go out to the regional towns. Canberra brass has done queanbeyan anzac day for years. They love having a band and appreciate us. We lead the parade and everyone gets involved. You feel like you are part of something special

Junee is looking for a Band, come on down to the classiest town in the eastern Riverina, give me a call.

So now we just watch rows and rows of servicemen and servicewomen walking up the street? To quote from a famous song “Soon no-one will march there at all”.

Brian coordinated the march for many years and will be very upset to hear this.

Perhaps it's time Anzac Day was taken out of the RSL's hands and looked after by DVA. After all, they hold the trade mark on the word "ANZAC".

I honestly believe DVA would be worse.

Andy....having been involved in organising numerous Anzac Day services (admittedly overseas), I can assure you that DVA runs very professional events. However, I think I can confidently say that DVA would not want to go anywhere near multiple domestic Anzac Days. The War Memorial - which already has a major role in Canberra's ceremony - would do a good job if the RSL were to step aside (unlikely).

The bands maketh the parade! I love brass bands! Keep them!

So what do our vetetans march to now? Perhaps an ipod in their ears. Stupidity at work.

It’s not a wonder given the bands are static. Wouldn’t it make more sense for the bands to march as well, as we do in other states?

Agree totally. It is a very strange arrangement. The bands should be marching.

We would love to march and play, only the ADFA band marches and plays up ANZAC parade. We have not been allowed to March and play for as long as I can remember (2005 in this membership stint).

Ridiculous on so many levels.

Paul Leins - 17 minutes ago
AJ Jay some savage gravel drive ways out there View
AJ Jay - 56 minutes ago
Paul Leins but but you may have to go over a gutter in the carpark...or park on a green verge...totes justified then.🤣 View
TimboinOz - 5 hours ago
A Forester is even better. More ground clearance makes it's reach / range into bushland a good bit better. And it's just as g... View
News 83

Diana Napier - 44 minutes ago
It's not a museum. That's the point what they are building is a ballroom for men who never had one.... View
News 66