Selected for the Commonwealth Games at 12, Dimity was thrown in the deep end 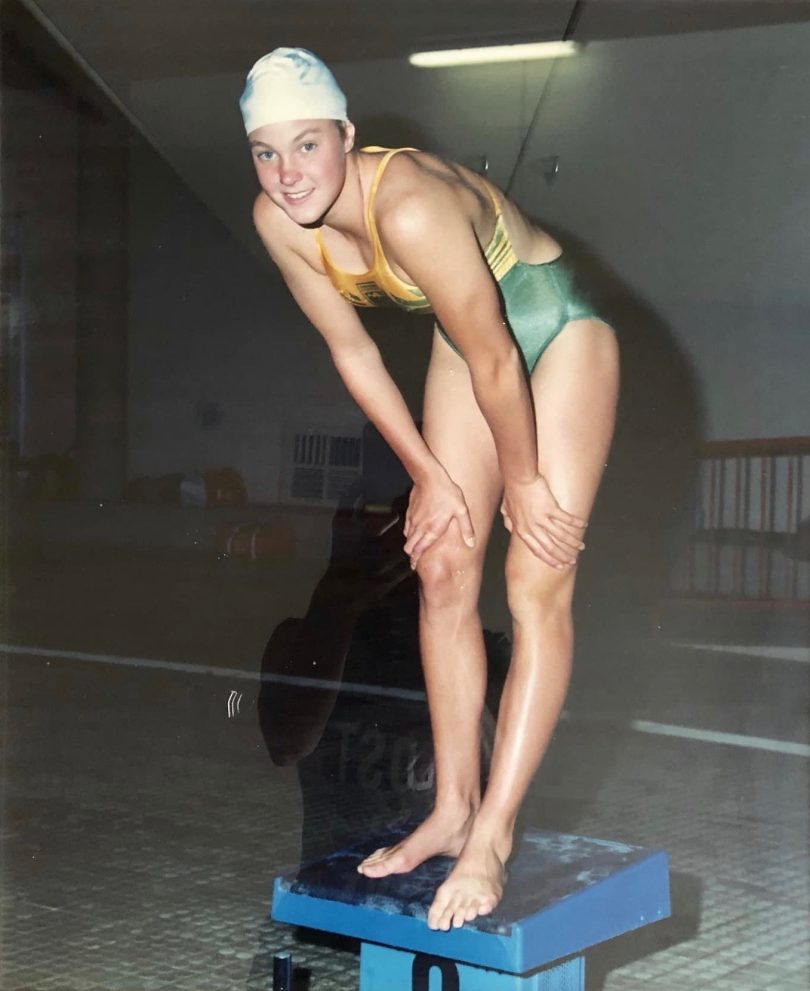 Dimity Douglas was just 12 years of age when she competed in the 100 metres breaststroke at the 1982 Commonwealth Games in Brisbane.

Dimity was in Year Six at Canberra Girls Grammar Junior School when she was selected in the Australian team. The selection was just three years after she started training in a squad at the Deakin Health Spa.

Initially, it was treated as an after-school activity in a busy schedule.

“I was nine years of age and involved in a range of activities including tennis, guitar, horse riding, which was my passion, and swimming. I was kept busy,” remembers Dimity.

Having conquered the Age Championships where she was only training three times a week, her training load was increased to 10 times a week before she had even turned 12. She was breaking plenty of national records along the way.

Six months later, Dimity entered the Open Age Championships, which doubled as the trials for the 1982 Commonwealth Games in Brisbane.

Having just turned 12 and in Year Six at school, the trials had the potential to be a daunting experience for her.

“I was seeded 24th heading into the Championships. As it turned out, I dropped 10 seconds off my previous best time and won the 100 metres breaststroke title, which secured automatic qualification for the Commonwealth Games. I didn’t even know what the Commonwealth Games were at that stage.”

Did her life change, given the enormity of the moment?

“I became instantly famous as I was the youngest sportsperson to represent Australia at any of the Games. I was the house sports captain, so the younger kids thought it was great,” says Dimity, “and while giving me great support, my friends didn’t treat me any differently, which I was happy about.”

The 1982 Commonwealth Games attracted extra hype being a home Games in Brisbane.

“I’d never experienced anything like it before. It was my first time being away from my mum, so my diet while with the team wasn’t great. I ended up with a cold just before competition got underway and I just missed out on making the final.”

Two years later as a 14-year-old, Dimity made the Australian team in three events for the 1984 Olympic Games. There were high expectations as she had been on world record pace at training. Once again, she was the youngest in the team.

Unfortunately, a crippling stomach bug saw her lose five kilos, which ultimately impacted her performance. Despite this, Dimity broke her own Australian National Open Record in the 100 metres breaststroke in the B final, but missed out on the A final.

Dimity came away from the Olympics doubting her mental ability to push through the lactic barrier.

“I didn’t meet expectations. Nobody consoled me; it was just swept under the carpet. It was an emotional experience beyond my years, and it wasn’t dealt with properly. After the Olympics, the pre-race negative self-talk began.”

Not to be deterred, Dimity made the Australian team for the Pan Pacs in 1985 where she won silver in the medley relay and made the final in both her individual events.

In the same year she was also named Canberra’s Young Citizen of the Year. The citation recognised her commitment to training five hours a day, her continued application to school work, and her ability to provide an example to both schoolmates and young athletes.

At the 1986 Commonwealth Games, Dimity broke her own Australian National Record again and walked away with three bronze medals for the 100 and 200 breaststroke and the medley relay.

By the time the trials for the 1988 Olympics came around, she was at breaking point.

“I was burnt out,” says Dimity. “I was getting sick with flu-like symptoms and I was continually having shoulder issues. I was 17 and a half, in Year 12 and they wanted me to give up school to focus on swimming. I was in pain all the time and I decided to give it up and concentrate on completing Year 12.”

A couple of years later she would go back to swimming but it was only for a short time before she retired from competitive swimming for good.

READ ALSO Love in the age of COVID-19: Doug and Dimity’s special day is one to remember

Now at 50 years of age and working in the Commonwealth Public Service as a management accountant, Dimity says she has no regrets about her time as a competitive swimmer.

“I had some great experiences during my time in swimming. I built friendships that will last until the day I die. And with all the sport I did as a kid from the age of five years, it has carried through my life. I am now doing sports I wasn’t able to do while I was swimming, sports such as skiing, horse riding, trail running and mountain biking.”

Dimity was in the news last year when she married Douglas Boyd. With COVID-constraints on attendance, her guests responded to the restriction by conducting a drive-by as part of the wedding ceremony. 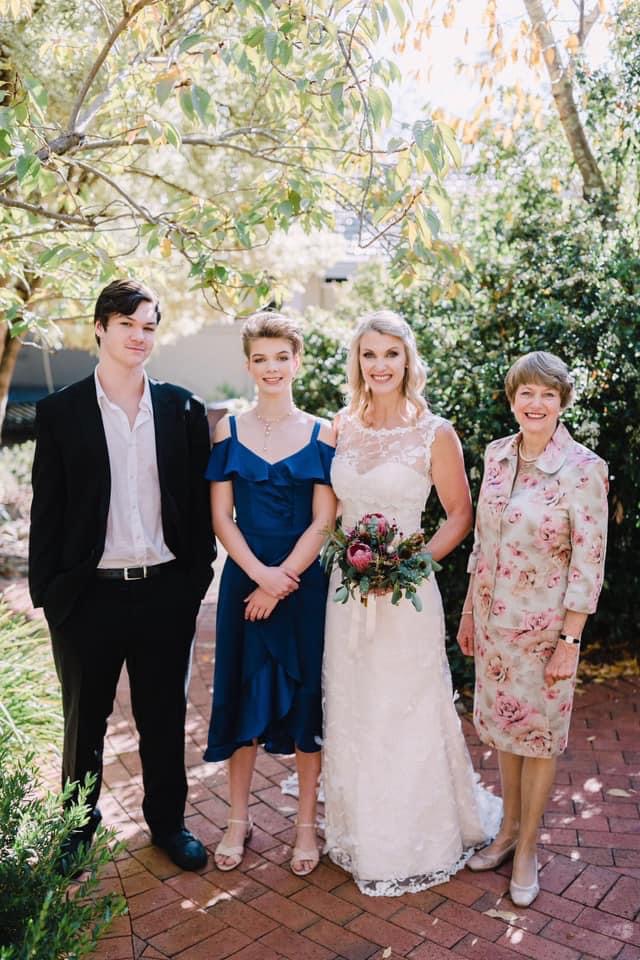 Dimity Douglas and family on her wedding day. Photo: Supplied.

Dimity has also found herself back in the Canberra swimming family, this time as a parent with 16-year-old son Lachlan involved in water polo while 14-year-old daughter Chloe is an emerging talent in butterfly.

“She loves it more than I did. As soon as she learnt to butterfly, that’s all she wanted to do. Her goal is to make it to the Olympics, and I have conditioned her not to focus on winning but on personal bests.”

Under Dimity’s watchful eye and with the benefit of experience, Chloe is being carefully guided through the sport.

“She does five sessions now and is moving to six, plus strength and conditioning. At 14, I was training 11 times a week with three gym sessions. It was too much for my age and contributed to my early burnout.”

The comparison is stark. It shows how lived experience can effectively guide the next generation. For Dimity, it brings back memories of her positive experiences in the swimming pool as a 14-year-old.

Good article Dimity Douglas, glad we have moved on from smashing swimmers with ridiculous number of sessions doing huge distances.

Thank god times have changed. 12 is a ridiculous age to be representing your country no matter how good you are at that age. Glad to see the Olympics has a minimum age of 15. Should be higher. Sport at the international level should bf about the long term, so glad to see swimmers in their late 20s and early 30s are still competing now. Well, in Europe they are. Australia had this mentality of all retired by early 20s. Times are changing for the better. Slow burn

Elspeth Shannon Rollason lol, like horse riding, mountain biking, skiing… all the sports we couldn’t risk doing while training at the elite level. These days I’m very much enjoying them…. however, I’m hardly ever in the pool doing laps 😁

She was in the year above me. I knew she was a ‘sporty’ but had no idea of the extent of her training etc. I knew of two in my year who were burnt out: gymnastics and swimming.

Kerri-Anne Lund we’re you friends with Dimity? I have a vague recollection 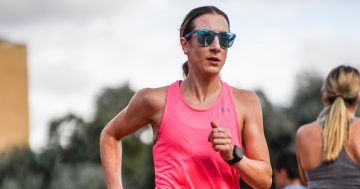 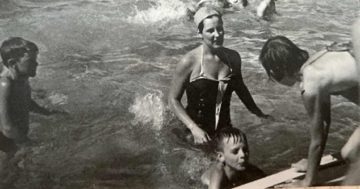 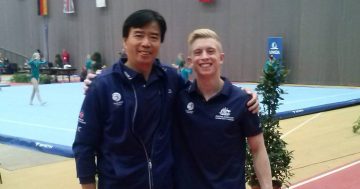