Foxsports has the wondrous news about the Brumbies nail biting win in Pretoria over night.

THE Brumbies have won through to their first Super Rugby final in nine years after centre Tevita Kuridrani scored a last ditch try to sink the Bulls 26-23 in Pretoria.

It’s the first time the Bulls have lost a Super Rugby finals match at their South African home.

The Bulls turned down three penalty goals to kick for the corner while one point up in the final 13 minutes as the Brumbies’ staunch defence held them out.

It took a message from Bulls coach Frans Ludeke to take the three points when they were offered for a fourth time in the 76th minute on Saturday night.

However the Brumbies obtained good territory off the resulting kick-off and flyhalf Matt Toomua busted the line to send Kuridrani over in the 79th minute, TMO Shaun Veldsman ruling there was no forward pass in the lead up.

If you want to hear the lamentation of the women coming out of South Africa then Keo is worth a read.

Two fantastic finals this weekend, the Brumbies into the Grand Final in Hamilton next Saturday at 5.30pm.

And put Mad Monday into your calendar for 5 August.

Win lose or draw we all owe the Warrior Priest Ben Mowen a drink. 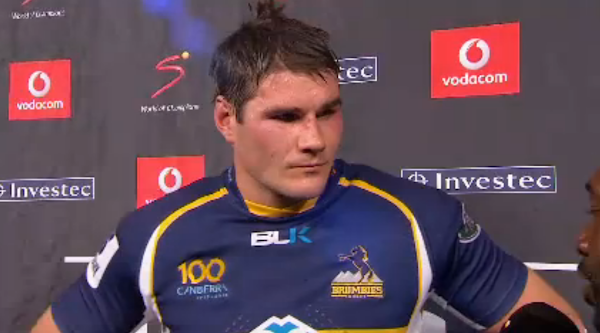 2 She weepeth sore in the night, and her tears are on her cheeks: among all her lovers she hath none to comfort her: all her friends have dealt treacherously with her, they are become her enemies.

I was thinking of this bit of the Conan franchise.

Some of the comments at the Keo site are gold. ‘Not a Boks arse’, for example.

And call me strange, but I think quite a deal of the South African lamentation is from the boofier sex.

I was gutted to this match. Perhaps unsurprisingly, there aren’t any pubs in Swtizerland that show the rugby. I’ll be in Venice for the final. I really hope somewhere is showing it. While Italy do play rugby, I don’t really see it being Venice’s thing.

Well worth sitting up to watch. Even more inspiring that they did it against two fairly dubious touch judges. Metres stripped off kicks into touch, dubious out on the full calls and one blatant ball that was kicked out by a Bull and ruled to have come off the Brumbies. Great win!!

Haven’t had a chance to watch the game so no idea what, if any influence the refs had on the game. However I do find it odd that the field ref, the touch judges and the TMO were ALL South African. I thought with big games, even at Super rugby level the field ref at least was meant to be from a 3rd party country, but having all 4 from the ‘home’ country is a bit rich.

Well worth sitting up to watch. Even more inspiring that they did it against two fairly dubious touch judges. Metres stripped off kicks into touch, dubious out on the full calls and one blatant ball that was kicked out by a Bull and ruled to have come off the Brumbies. Great win!!

Some of the comments at the Keo site are gold. ‘Not a Boks arse’, for example.

And call me strange, but I think quite a deal of the South African lamentation is from the boofier sex.

The final is on at such a civilised time!

Nick Savino - 2 hours ago
Try about 42% total in Canberra for Federal and ACT that's not quite most ….. View
Emmac Ph - 11 hours ago
John Dawe there’s unemployment in the ACT and the people who work in the public service are asked to do more every year wit... View
Eddie Majcic - 1 day ago
Why is it a surprise. Most are public servants in secure, well paying jobs...... Being bled dry by the stand over and extorti... View
Sport 18

Evan Hawke - 13 hours ago
One advantage of the tram to Gungahlin is that it was designed to be quicker than the bus it replaced, the tram to Woden is b... View
Denise Bourke - 1 day ago
those south of the lake laughed at suffering of those in the north. Seems they've forgotten pain to workers and businesses of... View
Bill Gemmell - 1 day ago
Could this be a clue that he is going to finally announce the delayed Molonglo high-level bridge? "Mr Barr also flagged furth... View
News 2

Travis Cragg - 1 day ago
From a college perspective, it would've been considerate if they could've waited until after the AST... View
Mathew Richards - 1 day ago
All about the money, not the outcomes for the students. View
show more show less
*Results are based on activity within last 7 days

A small beetle has forced the closure of The Good Guys in Fyshwick and Belconnen. The Khapra beetle, classified as...
Breaking 0

Tributes are flowing in for 48-year-old Toby Carr who was identified yesterday as the kayaker who died in the flooded...
Opinion 83

Take a peek at the Stromlo Leisure Centre opening today

Superlatives have flowed during a media peek at the $36 million Stromlo Leisure Centre at Stromlo Forest Park ahead of...
*Results are based on activity within last 7 days

@The_RiotACT @The_RiotACT
The ACT is on the lookout for fire towers operators. The role is an essential defence against bushfires, and successful applicants will have an office view like no other https://t.co/1igugnHwqU (23 minutes ago)

@The_RiotACT @The_RiotACT
Canberra development giant Geocon is looking to increase the number of apartments and commercial tenancies in Stage 3 of its massive Republic precinct development in Belconnen. Fresh plans also reveal a new look for the 24-storey mixed-use project https://t.co/wcDChrRvI2 (2 hours ago)

@The_RiotACT @The_RiotACT
The Canberra-based Academy for Enterprising Girls is on a mission to help girls aged 10 to 18 Australia-wide learn how to start up their own businesses https://t.co/DgB3Afu1JD (3 hours ago)