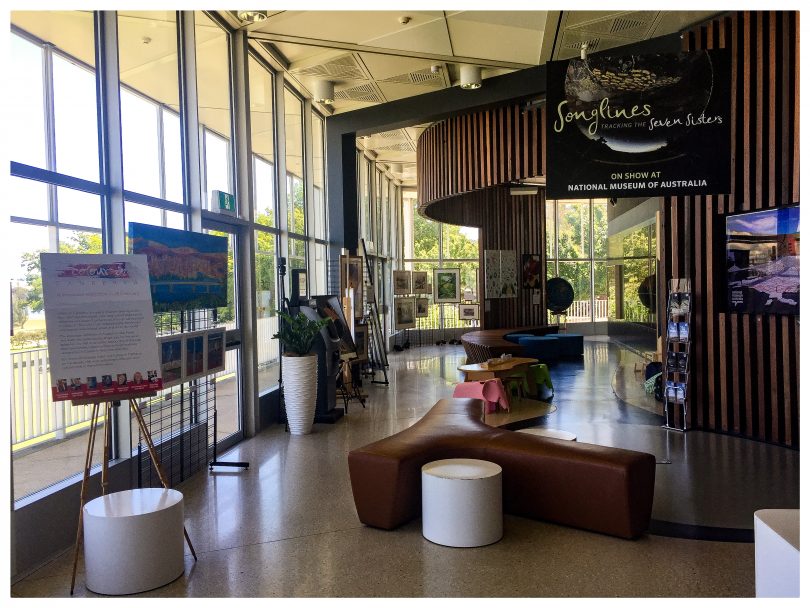 The latest project keeping her on her toes – and her fingers on her paintbrush – is ‘Colour in Canberra’, and when you hear what it aims to achieve, you might almost envy Caroline’s busy schedule.

‘Colour in Canberra’ is perhaps best described as a celebration and appreciation of local art and the artists behind it. The man behind this vision is one well known in the art community in Australia – Graeme Stevenson, an award-winning Australian master artist whose passion lies in promoting and supporting the arts in any way he can.

In 2010, Graeme created a mini-documentary series called ‘Colour in your Life’, in which he interviewed artists from around the world in an attempt to gauge their creative processes, their inspirations, their personalities, and the way their environment influences their art. The aim of the series was to bring the joy of art into our living rooms and cultivate an appreciation for it. Taking into account its success (the show reached its 11th season in 2015), Graeme shows no signs of slowing down.

Now, his attention is on the nation’s capital.

“A year ago, Graeme approached me and invited me to be part of his show,” Caroline says. After featuring artists from around the world, local Canberran Graeme now seeks to turn the spotlight on Canberra’s own artists, with a specialised version of ‘Colour in your Life’, called ‘Colour in Canberra’.

“I feel very privileged to be taking part in a show like this next to so much local talent,” Caroline said.

They now had the art, the crew, plenty of talent, and bundles of enthusiasm. The only thing they were lacking was the funding to get this creative engine running. And who should come to their rescue at a time like this but the art-loving ACT government!

Recognising the importance of the work they were trying to do, Chief Minister Andrew Barr invited tourism ACT to invest in the project, which ultimately culminated in the launch of the ‘Colour in Canberra’ art exhibition currently taking place at the Regatta Point in Parkes until 28 February.

On the 28th, the exhibition will round off with an auction, to raise the funds they need to make the ‘Colour in Canberra’ documentary a reality. Graeme himself will make a special appearance on the day, to deliver the special guest speech, while world-famous artist and exhibition participant, Frank (François) Arnold, will be the MC and auctioneer of the night.

The auction on the 28th is invitation only, but if you would like to participate then you are most welcome to. You only need to contact Caroline on 0417 715 946 or jump on their Facebook page to request an invite and the organisers would be more than willing to extend an invitation to you.

And there is no reason you would not want to invest, or at the very least, attend this exhibition, as the art on display is certainly a treat for the senses. The seven talented names driving this exhibition forward have ample experience in the art community in Australia and are perhaps the most diverse collection of artists to band together for a project of this nature.

Frank [François] Arnold: A Canberran through and through, Frank opened the first Design Studio in Canberra in 1979 offering services in Architecture and Graphic Design. It was known as ‘the sheltered workshop for the creatively insane’. Frank’s painting style is a release from the constraints of Graphic Design and Architecture although his sense of composition still remains.

Caroline Deeble: An expressive artist painting ‘contemporary nature’. Her unique style explores a variety of ways to share her love of the natural world. Often called ‘the rock artist’, her artwork has included paintings from natural water courses to ocean reefs and Australian bush scenes. Her unique style created on her artistic journey of 30 years, explores layers of colour and shadows, while capturing the essence of Australia’s aromatic forests and free-flowing waters. Her artwork is included in many private collections nationally and abroad.

Chan Dissanayake: One of Australia’s leading watercolour artist’s living in Canberra. His mastery in watercolour is manifested by the vast varying subject matter that he tackles from rural landscapes, urban cityscapes to coastal seascapes. In 2017, Chan received the ultimate accolade for an Australian Watercolourist when he was elected to the elite Australian Watercolour Institute. Known for his innovative approach to teaching and generosity in sharing his knowledge, Chan has gained considerable reputation as an outstanding tutor. He conducts workshops throughout the country and leads international painting tours for Travelrite International. Currently, he teaches watercolour at the ANU (Australian National University). He has contributed many articles to leading art publications including International Artist, Australian Artist and Artists Palette. 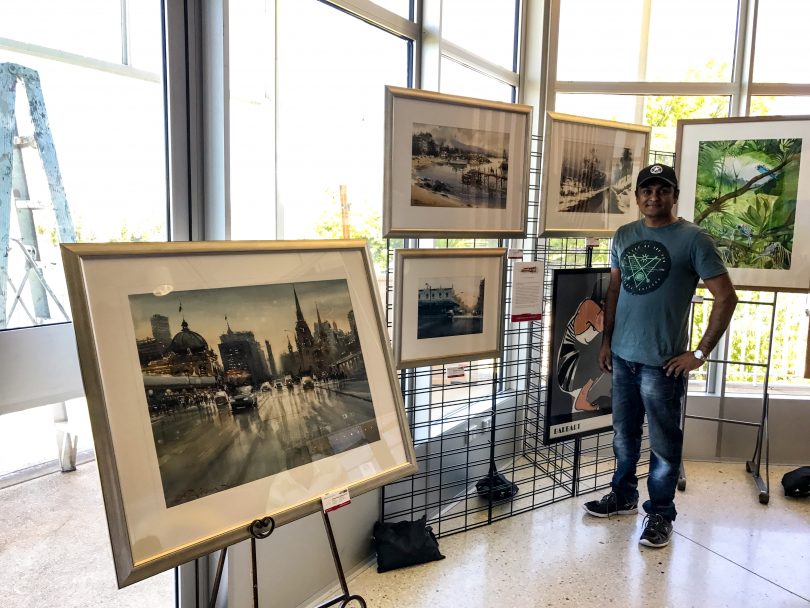 Margaret Hadfield-Zorgdrager: Margaret has been working as a professional artist in the Canberra region for 26 years. She began with markets and co-ran the Artists Shed Gallery/Studios for 15 years in Queanbeyan, then her own gallery in Phillip and now a studio in Fyshwick. With a passion and interest in military history, Margaret won the 2006 Gallipoli Art Prize and has been a finalist almost every year since. Six of the Gallipoli Series were exhibited in Netherlands, Turkey and France for Anzac Commemorations. Margaret has been a finalist in many significant art prizes including the Portia Geach Art Prize with portraits of local Indigenous Elder Matilda House-Williams and basketballer Lauren Jackson. Her portraits also feature in a book titled Inspiring Australian Women by Dr Kathryn Spurling.

Amanda McLean: Amanda McLean is a Canberra region award-winning artist who has been working with the Pastel medium for over thirty years. Her traditional landscapes have a great sense of place, with her paintings of the Canberra region and the south coast being especially regarded. Amanda has written in excess of 30 articles on pastel techniques which have been published in national and international art journals. She has also worked closely with the Australian company Art Spectrum, with her recipes being used in their recently released new pastel series.

Barbara Van der Linden: Barbara van der Linden is a Canberra artist of some 47 years. She is best known for her portrait project called Faces of Canberra, a Canberra Centenary Project where she painted 30 portraits of the ordinary and extraordinary people of Canberra, and published a book of these portraits along with the stories of the portrait subjects. She also held mini ‘This is your life’ events where the Canberra community could celebrate the contributions these people had made to their community. 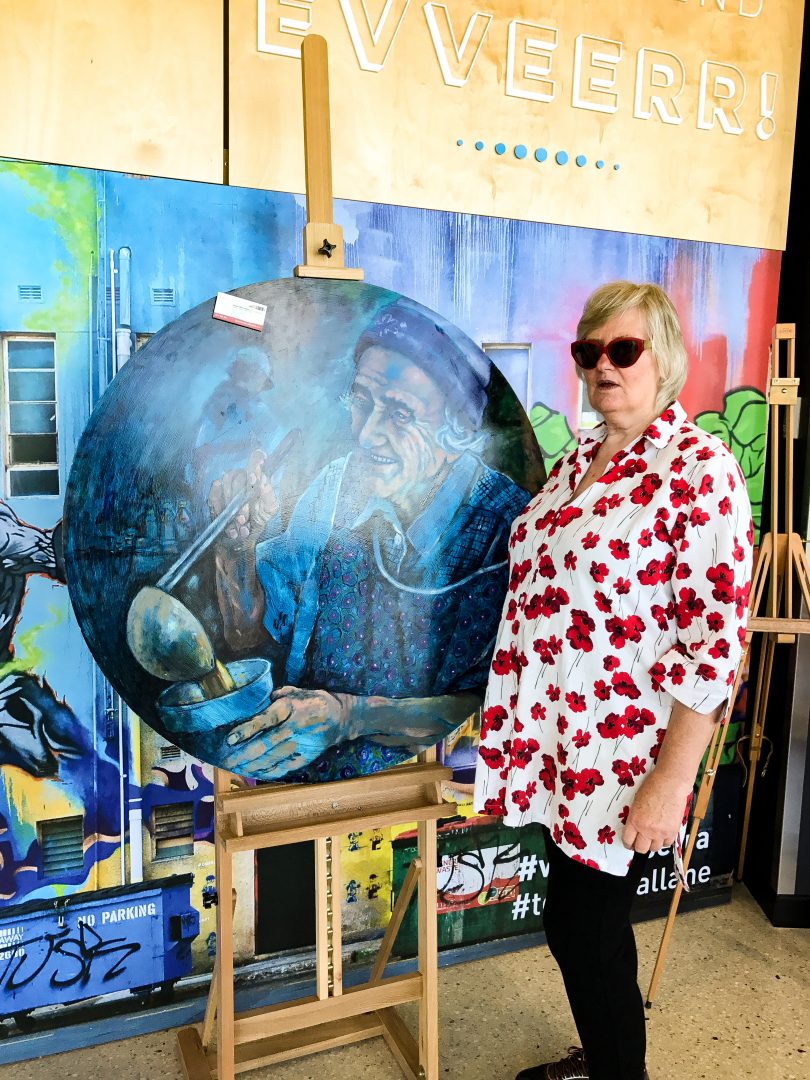 Delene White: As a full-time artist working in two, three and digital dimensions, Delene’s eclectic and award-winning style is clean and intriguingly simple. Her signature pieces combine graphics and illustration with texture and space. Delene visually records her community and its stories through a love of colour and form, with her diversity in dimensions and mediums stemming from a desire to best record her observations. Whether it be her character cut-outs at the national all-ability playground (Boundless), the creative decals in civic promoting healthy waterways or the bronze miniatures of her five-metre tall ‘earth-women’ sculptures, Delene’s work invites the viewer into her story.

Colour in Canberra – on display until 28 February at Regatta Point, Barrine Drive, Parkes.