Seven things to do around Canberra this weekend (10–12 March) 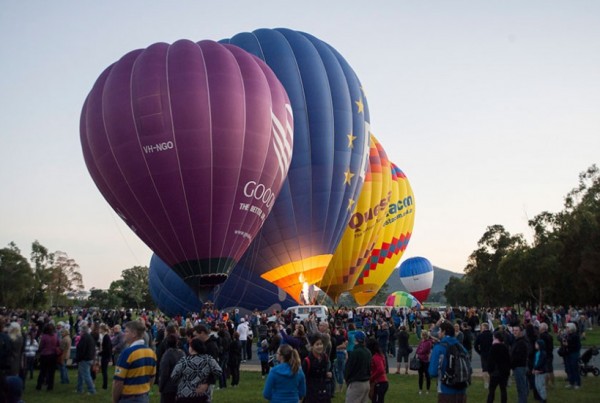 If you’re staying in Canberra this long weekend, why not take some time out from working in the garden or tackling DIY jobs to be a tourist in your own town? There is plenty on to distract you. The Enlighten festival and Cold Light, The Street Theatre’s stage blockbuster continue; the Balloon Spectacular and the French Film Festival start up, and Muse in Kingston is hosting a festival to celebrate curiosity, conversation and creativity. There is also great live music on with Holly Throsby playing at the ANU Bar and local band, Slow Turismo playing at the Polish Club. Unfortunately, they are both playing on Friday night so you’ll have to choose between them. Why not take Monday off to recover? 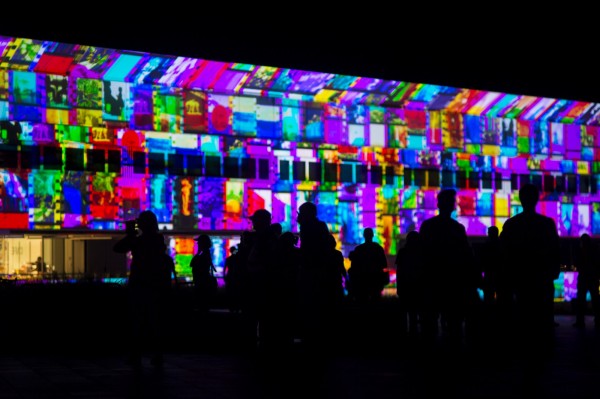 Enlighten
Where: Parliamentary Triangle and satellite venues
When: Lights on at 8pm
It’s the final weekend of Enlighten and if you haven’t caught it yet, do so. There are the amazing projections, of course, but also the Night Noodle Markets and music on the main stage both Friday and Saturday Nights. Listen to Mondecreen, Cookin’ on 3 Burners and The Ansah Brothers on Friday night, and Clea and Tinsmith on Saturday night. Enjoy late night openings at the Portrait Gallery, Old Parliament House and the National Archives of Australia—where you can catch the final weekend of the Iconic Australian Houses exhibition or spend an evening with Tim Ross and Kit Warhurst talking about architecture. Take a night photography workshop or gin masterclass at Questacon. Sip champagne while viewing the Versailles: Treasures from the Palace exhibition at the National Gallery. Celebrate Australian advertising over dinner at the National Library or dine in the Members’and Guests Dining Room at Parliament House. 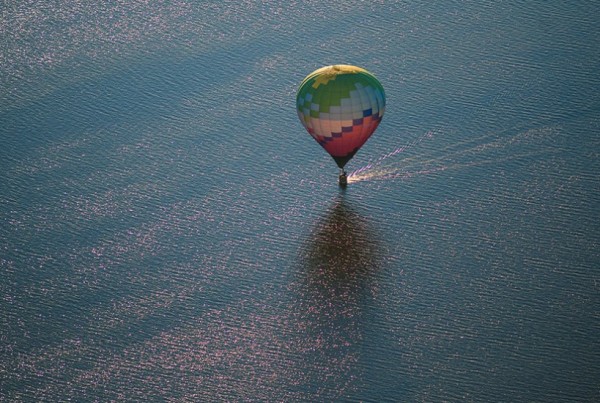 Balloon Spectacular
Where: Lawns of Old Parliament House, King Edward Terrace, Parkes
When: 6:15–10am
Set your alarm early to enjoy the Canberra ritual that is the Balloon Spectacular. As well as balloons there is food, a long line for coffee and, on the weekends, music to keep you entertained while you wait for your coffee. The whole event has a great atmosphere that keeps me returning every year despite my low success rate in actually seeing the balloons launch. Ballooning, of course, is entirely weather dependent so check Facebook and Twitter for launch updates. My tip for seeing the balloons launch? Don’t go the same day as me!

Festival Muse
Where: Muse, East Hotel, Kingston
When: various sessions
Across eight sessions, some of which have already sold out, this festival will bring together some of Canberra’s most intriguing individuals to share their ideas and generate great conversation. Highlights include Virginia Haussegger and Mark Kenny discussing how work, family, friendship, politics and being creative work for them, Jerome Felix, Head Chef of The Cupping Room, taking over the Muse kitchen on Saturday night, and three Canberra historians – Ann McGrath, Frank Bongiorno and Meggie Hutchison – discussing the craft of historical research and the role of history in a turbulent world. The festival will finish up with a picnic in Telopea Park on Canberra Day featuring chef Janet Jeffs, gardener and musician Simon Rickard and food writer Liz Posmyk.

French Film Festival
Where: Palace Electric
When: various sessions
Presented by the Alliance Francaise this festival will present 45 French films. The opening night film is The Odyssey a biopic of celebrity oceanographer, Jacques Cousteau, directed by Jerome Salle, and apparently, 150 Milligrams is not to be missed. Directed by Emmanuelle Bercot, it tells the true story of whistle-blower, Irene Frachon, who uncovers the link between patient deaths and a medication called Mediator.- 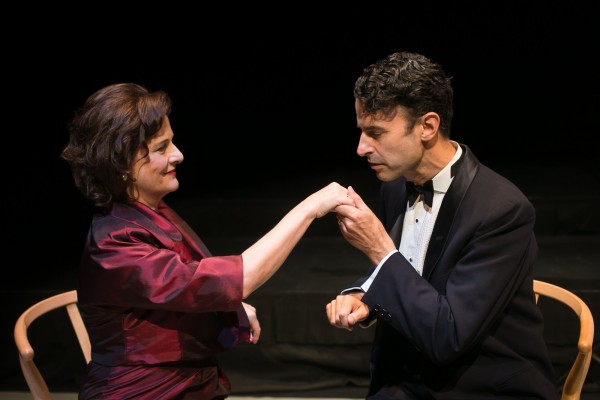 Cold Light
Where: The Street Theatre
When: Fri & Sat, 7:30pm Sun, 4pm
Adapted for the stage by acclaimed playwright Alana Valentine, this play is based on the third book in Frank Moorhouse’s Edith Campbell Berry Trilogy. This play picks up Edith’s story in the 1950s when she moves to Canberra with her cross-dressing husband and her ambitions to become Australia’s first female ambassador. The story stretches from Menzies to Whitlam and chronicles the development of Canberra through this period. Commissioned by The Street as part of Canberra’s Centenary, Cold Light stars Sonia Todd as Edith, supported by Craig Alexander, Nick Byrne, Gerard Carroll, Tobias Cole and Kiki Skountzos and is directed by Caroline Stacey. 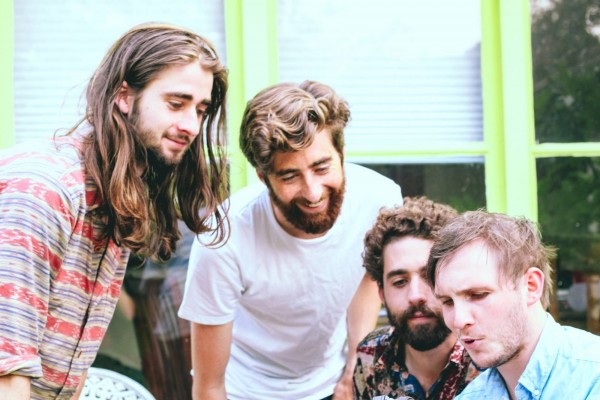 Slow Turismo
Where: Polish White Eagle Club, Turner
When: 8pm
To launch their latest single You Were Dead, local indie rock band Slow Turismo is embarking on a mini-tour of Canberra, Sydney and Melbourne. It kicks off this Friday at the Polish Club. Slow Turismo’s music incorporates beautiful vocals, melodies and harmonies. They are an accomplished band with a diverse set of songs, check them out at Triple J Unearthed.

Lights! Canberra! Action!
Where: Senate Rose Gardens, King Edward Terrace, Parkes
When: 7pm, films from 8pm
Presented as part of the Enlighten Festival, Lights! Canberra! Action! invited filmmakers to make a movie exploring the theme ‘right’ and an include ten listed in it. The filmmakers were given ten days to shoot, edit and produce their seven-minute films. See the top twelve finalists this Friday night, with the winners to be announced immediately after the screening. Bring your chair or bean bag, blanket and movie snacks, and settle in for a great night of film viewing.

Trish Hunt - 19 minutes ago
We just had a week in Canberra visiting our son and we commented on the long grass everywhere we went. I ask if there was a m... View
Robert Curtis - 21 minutes ago
Ken couldn’t happen in the Watermelon Republic of the ACT! View
Amy Clark - 2 hours ago
Kirstin Maree we’ve (well Anthony) has been doing our nature strips and down along the walkway and next doors for a while n... View
News 18

Rick S Tar - 19 minutes ago
Michelle Kwan a better camera and or drone would of captured the moment better. Cyber Monday still has some sales. View
Charlie Williams - 1 hour ago
In my time it was up and down all the time and didn't really seem to have anything to do with local rainfall- pub talk in que... View
Charlie Williams - 1 hour ago
Wayne Lutter don't forget Tim flannery - it will never rain again! View
Opinion 58

Al Leece - 41 minutes ago
Steve Aust Yeah, looks good, until you have to pay your own super, no holiday or sick pay and, theoretically at any rate, the... View
Lynette Clifton - 60 minutes ago
It's been going on for decades unabated. The amount of money wasted on contractors would have built the new subs. View
Steve Aust - 1 hour ago
Jay Kay yep. Web devs sit at ASO-6. Go in as contractors & get $120 an hour!... View
News 3

HiddenDragon - 2 hours ago
With Australia's international border being "thrown open" (as tonight's TV news reports are reminding us) from next Wednesday... View
jorie1 - 4 hours ago
Close the international borders to everyone but Australian citizens! And have strict quarantine for Aussies coming in here .... View
News 17

With rain comes growth - and while no one would argue this is a bad thing, many agree it is...
Opinion 57

It could be a case of all quiet on the War Memorial front after the National Capital Authority gave the...
Public Sector 20

@the_riotact @The_RiotACT
The battle lines are drawn. Who do you know that needs to get drenched? The Great #HaigPark Water Fight is back, with this month’s Play Outside Day to transform Haig Park into a #waterfight arena https://t.co/XVI03UjeCX (54 minutes ago)