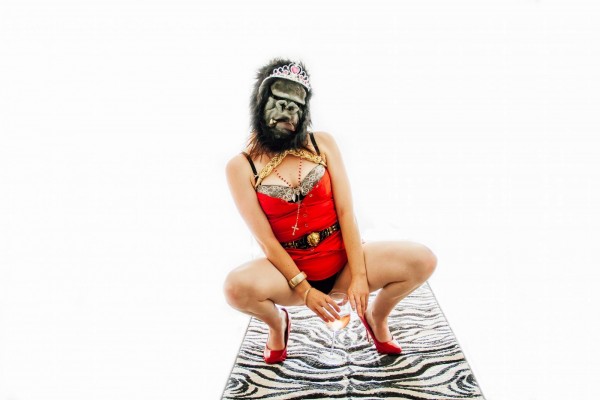 A night at the Canberra Theatre’s Courtyard Studio where you can jump into the bath with the actors and talk philosophy? ZOE PLEASANTS previews Shadow House Party, which opens tonight and runs till Saturday

Is it a theatre show? Is it a party? With an emphasis on a night out to the theatre being fun, Shadow House Party is both a program of original theatre work and a dance party.

To set the mood and ease inhibitions, the audience will be welcomed with a free drink and then invited to walk into a space with a number of animal-like creatures performing a piece created by Bambi Valentine. The audience is invited to interact and play with these creatures before they all come together on the stage for a highly physical finale.

The second piece on the program is Trinculo’s Bathtub 2: Annihilation. Created by Joe Woodward and presented by his company Shadow House PITS, the character of Trinculo first appeared in Canberra’s theatres in 2011. “It’s a character I’ve been developing over the last six years; he’s crazy, absurd and darkly humorous at times,” explains Woodward.

“And he works from a bathtub!” Trinculo passes comment on a world full of contradictions.

Like Valentine, Woodward also encourages the audience to participate in his show. In fact, anyone who would like to jump in the bathtub with Trinculo is welcome to do so! There will even be towels available for you to dry yourself off with if you take up the invitation.

“One night, Trinculo was sprouting his bullshit philosophy and one audience member happened to be a philosophy student doing a PhD,” Woodward tells me.

“So he took on Trinculo with an argument, and finally Trinculo said, ‘well hop in the bathtub with me and we’ll discuss this!’ So the guy did, he took off his gear and jumped in.”

Woodward says the audience was quite bemused by watching two near-naked guys, one with wings on, having a philosophical discussion in a bath.

After the pressure to participate in the first two pieces, the audience can relax during the final one, Ophelia’s Shadow. This show, created by Lucy Matthews and presented by Acoustic Theatre Troupe, rearranges Shakespeare’s Hamlet to make Ophelia the central character. Matthews has used Shakespeare’s original text, albeit with much cut-out, to tell Ophelia’s story and, for good measure, has added a punk-rock score to go with it. Matthews’ previous show, musical The Last Time, played to sold-out audiences in Canberra this time last year.

Matthews was inspired to write Ophelia’s Shadow while studying Shakespeare at uni. She found that productions of Hamlet often depict Ophelia as “an incredibly weak, boring, droll character”. But when Matthews looked at Shakespeare’s text she could see a strong, intelligent woman.

“I’m actually drawing out ideas that are there in the text, that Ophelia was a radical agent and she was written to be a radical agent,” says Matthews.

During Hamlet, Ophelia becomes mad and Matthews is struck by how often society recasts a woman’s emotion as madness to take away the legitimacy of that emotion. “This idea that Ophelia’s madness might not have actually stemmed from her losing her mind. She wasn’t a raging lunatic; she had very legitimate reasons to feel the way she did. It was something I really wanted to explore.”

To finish off the night, after Ophelia’s Shadow, the lights will be adjusted, the music turned up and everyone is invited to stay for a dance party.

For Woodward, interacting with the audience and using this interaction to shape his show is an important feature of his theatre work. When done well, audience participation can change theatre from passive consumption to something much richer. But still, some people are uncomfortable with being asked to participate in a theatre show; they would rather just watch.

What are your experiences of audience participation? When have you seen it done well in the theatre? Would you be likely to jump in the bath with Trinculo?

Kerry Apted - 9 minutes ago
Jo Hann thank you for your opinion. View
Jo Hann - 13 minutes ago
Kerry Apted I doubt it's so much about data for the school. It's probably more about knowing which kids are likely to pose a... View
Ian Barnes - 22 minutes ago
It's called the social contract. Along with the benefits of living in a community, like roads and hospitals, there are respon... View
Business 2

Peta-Rene Prior - 50 minutes ago
All kids should go to boarding schools?? Perhaps get all kids attending school to start with. View
Stas Idowu - 1 hour ago
Synergy Group View
Lifestyle 8

Cary Elliot Johnson - 2 hours ago
Claire Lee Koo because its a democracy with varying opinions on an open column. View
Elizabeth Jones - 3 hours ago
I saw the petition but it wasn't clear it was supposed to be a few fenced playgrounds per region. I know being in an older pa... View
Nat Thomas - 5 hours ago
Megan Munro it’s definitely going to help everyone, it should have been done a long time ago. I hope the gates have fences! View
News 3

kenbehrens - 3 hours ago
Isn't bringing forward future infrustructure builds going to create a construction vacuum down the track? The other issue of... View
shannos - 3 hours ago
Exactly, investors chasing capital gains and creating a self -sustaining ponzi growth model at the expense of our younger gen... View
shannos - 4 hours ago
Too much emphasis on infrastructure and construction which is cyclic transient employment relying on developers growth model.... View
Lifestyle 11

@the_riotact @The_RiotACT
#Apprenticeship growth in the ACT is the slowest in the country, and the Opposition and #industry leaders are calling on the Barr Government to do more https://t.co/VOy53VsEdS (34 minutes ago)