Border compliance checks such as these are likely to be a thing of the past as interstate travel opens up from 1 November. Photo: Michelle Kroll.

UPDATED 1:30 pm: Quarantine-free travel between the ACT and Victoria will restart from 1 November.

It’s the same day Canberrans will be able to travel to and from Greater Sydney.

The move almost mirrors the changes to the NSW-Victoria border which will open on the same day. However, NSW won’t allow unvaccinated Victorians to enter the state for holidays.

In the ACT, the lack of a distinction between vaccinated and unvaccinated travellers means all Victorians will be able to enter the ACT.

Logistically, it’s unclear how a potentially unvaccinated person could enter the ACT from Victoria if they are driving.

Chief Minister Andrew Barr said he was aware of concerns about unvaccinated Victorians using the ACT to sneak into NSW.

He noted that it was for this reason the ACT will wait until 1 November to relax border rules for travellers from Victoria.

Canberrans have been locked out of Victoria – and vice-versa – since July.

Speaking this afternoon on the first day retail re-opened in the ACT, Mr Barr said the economic impact of the COVID-19 shutdown was still to be fully measured.

Retail sales in the ACT were down 20 per cent in the month of August, which equates to a loss of between $100 and $120 million, he said.

However, that varied depending on the sector with items like food and groceries recording an increase in sales.

Mr Barr said this loss could still be made up in the coming months. 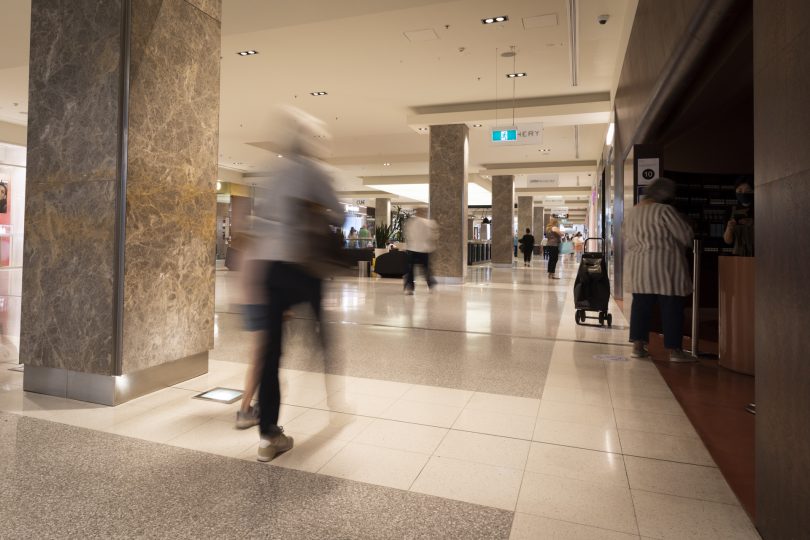 He also noted there was a difference between spending at large national chain stores like Bunnings or Kmart, or with international brands like Apple, and shopping at a local business.

“The question really will be the balance of the spend,” he said.

Mr Barr also said that for many people, lockdown had seen their household savings increase, and he expected them to be eager to spend in services, retail and travel as Christmas approached.

He’s previously expressed his hope for a V-shaped economic recovery in the Territory.

When questioned about whether he was concerned about unvaccinated people entering the Territory from NSW to shop, the Chief Minister said there was little evidence to support such a phenomenon and that it wasn’t “a major priority” given the ACT’s high vaccination rates.

Currently, 84.6 per cent of the Territory’s population aged 12 years and above are fully vaccinated.

Mr Barr expected the ACT to be 99 per cent fully vaccinated in November.

Third doses will now be available at the AIS COVID-19 Vaccination Clinic for the immunocompromised. Photo: Michelle Kroll.

Yesterday there were 28 new cases in the Territory. There are 386 active cases.

There are 20 people in hospital with COVID; 11 are in intensive care and five require ventilation.

A total of 1217 tests were conducted yesterday.

To improve the protection of the immunocompromised from COVID-19, ACT Health Minister Rachel Stephen-Smith said third doses would be available at the AIS Arena Mass Vaccination Clinic and other ACT Government vaccination clinics.

“Making these third doses available at our ACT Government clinics will make it easier for at-risk Canberrans to get protected faster,” Ms Stephen-Smith said.

“The additional primary dose is only available to a specific cohort of vulnerable Australians for whom two doses are not as effective. This is not classified as a booster.”

A letter from the person’s doctor will be required as evidence when they attend their appointment.

“If you think you are eligible for a third dose, you should talk to your doctor and then call our booking line to discuss making an appointment.”

Bookings for third doses can be made through the COVID-19 vaccination booking line on 5124 7700. Bookings are also available at the Access and Sensory Clinic for people who may need additional support, including those with a disability or mental health conditions.

Third vaccine doses will also be available through general practitioners and pharmacists.

The Australian Technical Advisory Group on Immunisation recommends people with specific immunocompromising conditions and therapies should receive a third dose (preferably an mRNA vaccine such as Pfizer and Moderna) two to six months following second dose administration, regardless of which vaccine was administered for the first two doses.

In the past 24 hours to 8 pm last night, NSW recorded 345 new COVID cases and five deaths.

Yesterday there were 372 new cases and one death.

On its first day out of lockdown, Victoria recorded 2189 new cases and 16 deaths.

There are 784 people in hospital with COVID, 145 in ICU and 94 require ventilation. 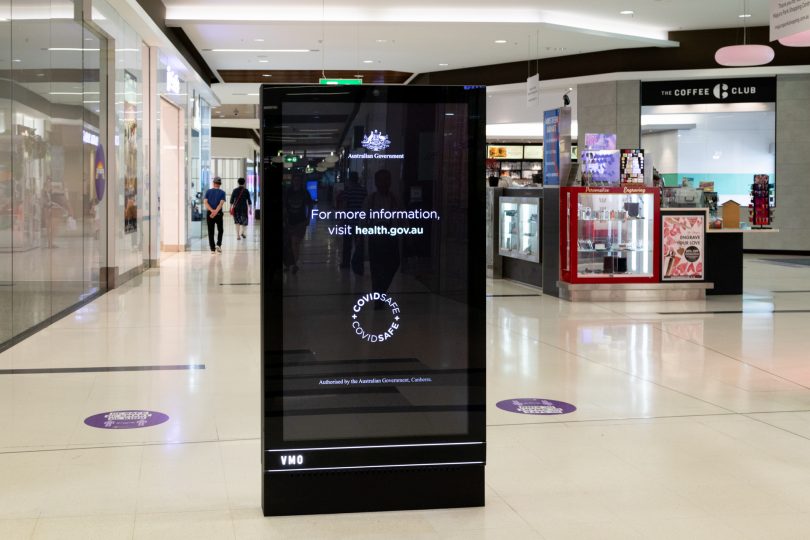 The shops are open again. At last! Photo: Michelle Kroll.

9:30 am: Retailers and keen shoppers rejoiced this morning as shops reopened across the Territory.

Bunnings, which has for weeks been restricted to click and collect services, was one of the first to throw open its doors today. Like many essential retailers, although the hardware giant was allowed to stay open at first, it was later forced to close to non-trade customers after concerns about the size of the crowds gathering there.

ACT Health has also confirmed the retailer can resume its iconic sausage sizzles as long as they are undertaken in a COVID-safe manner.

The ACT took its next step forward in the pathway at 11:59 pm last night (Thursday, 21 October).

All shops can now open with strict density limits of one customer per four square metres, and unlike in neighbouring NSW, customers are not required to show proof of vaccination to enter a store.

The additional freedoms come as the ACT has not yet recorded a spike in cases since the end of lockdown last Friday (15 October).

No new exposure locations have been added to ACT Health’s COVID-19 website and there are only 82 active exposure sites listed. 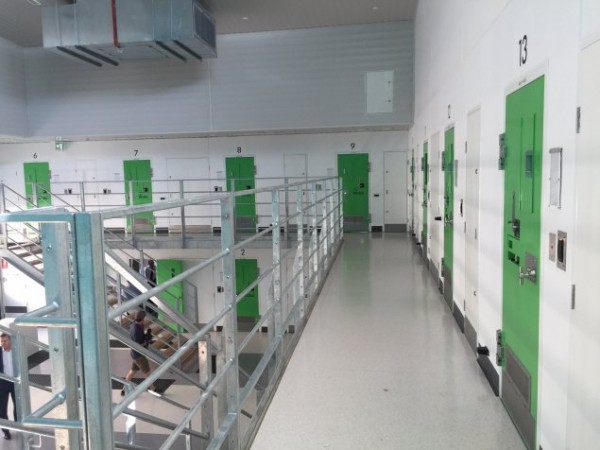 Ten positive cases have been recorded at the Alexander Maconochie Centre (AMC) to date. Photo: File.

At the Alexander Maconochie Centre, no COVID-19 transmission has occurred at the jail since a ‘reasonably senior’ staff member tested positive for the virus at the beginning of the month.

In a letter seen by Region Media which was sent on Tuesday (19 October) to all detainees, ACT Corrective Services Commissioner Ray Johnson said none of the identified contacts of this person have returned a positive result to date.

Commissioner Johnson had previously confirmed this staff member was fully vaccinated and had worked for at least three days while infectious.

When the case was identified, the prison was put into lockdown immediately.

To date, a total of 10 detainees have tested positive to COVID-19 at the AMC; nine have now recovered.

One case remains in isolation.

Currently, 86 per cent of detainees have received the first dose and 78 per cent are fully vaccinated.

In the letter, Commissioner Johnson said some restrictions have been eased as the AMC has returned to normal staffing levels.

Last week, the oval and other areas were reopened.

He also said Corrective Services are working through further options regarding the easing of restrictions, although he noted these would be eased “with caution”.

There is currently no vaccine mandate for corrections staff, but Commissioner Johnson said earlier this month that he understood the uptake among staff had been very high.

Minister for Corrections Mick Gentleman said in a statement that the containment of the virus within the facility was due to the hard work of Corrections Services and Health staff, as well as detainees.

“There is no textbook or formula on how to respond to the unprecedented COVID-19 delta variant, [this] is an excellent outcome,” he said.