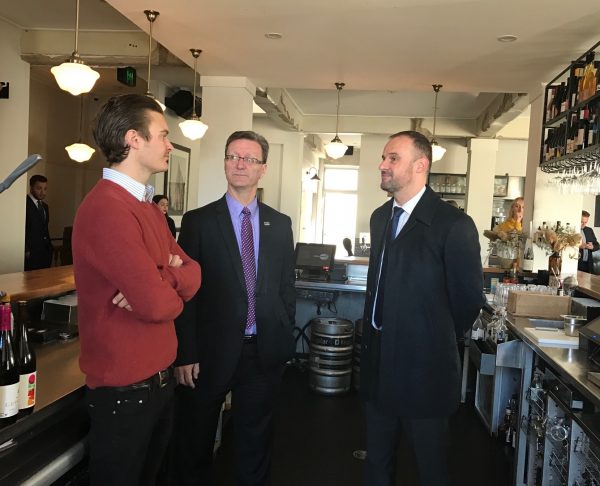 The majority of the funding, $4.8 million, will go towards the extra police, but the package also includes measures designed to encourage a diversity of options for nights out by providing a 25% discount on liquor licences for smaller venues that close prior to 2am and a one-month discount on permit fees for cafes and restaurants that host outdoor seating.

“We want to ensure that the regulatory barriers are reduced – that they’re still appropriate, but that both in the licence fees and in the regulatory regime we have a risk based approach for our venues,” he said.

“What that means is a very distinct policy approach similar to what we’ve seen in cities like Adelaide, where smaller venues are encouraged to set up, smaller venues that have closing times in that midnight to 2am range.

“We think that not only does that add significantly to the diversity of Canberra’s nightlife, but it also ensures a greater level of safety for patrons, and a greater level of responsibility in the service of alcohol in the city.”

He confirmed that as announced previously, the Government was no longer looking at the lock-out laws mooted last year. It had faced a sustained campaign from the hospitality industry over the proposed changes prior to scaling back its plans.

Nick Smith, the owner of Bar Rochford (which is upstairs at 60 London Circuit), was enthusiastic about the benefits of the Budget commitments for his business, the small bar sector and Canberrans generally.

“It’s a positive thing for everybody really, keeping the streets safer, and getting people to go out more,” he told the RiotACT.

The 25% discount on fees for smaller bars that close before 2am was a significant benefit for his business, particularly factoring in the savings over several years.

“That’s something you can put back into either staff training, machinery or more booze, whatever you want to do,” Mr Smith said.

An education campaign about the safe and responsible consumption of alcohol would be funded through fees for certain off-licensed venues.

“This particularly goes to address issues of pre-loading before people come out for a night on the town,” Mr Barr said.

ACT Attorney-General and Minister for Regulatory Services Gordon Ramsay explained that off-licensed venues that sold more than $3 million worth of alcohol each year would face an annual increase in fees of a minimum of 5%.

“That’s acknowledging that the large off-licence venues are the ones that contribute most to the risks of alcohol-related harm through pre-loading,” he said.

Sue Brooks - 29 minutes ago
So beautiful. Looks like a painting. View
Heather Alexander - 3 hours ago
LoveTulip Tops gardens, so glad you have posted these wonderful pictures. View
Teagan Brissett - 4 hours ago
Belinda Brissett better than nothing! View
News 50

Ashley Wright - 36 minutes ago
Julian Sortland believe already decided Canberra will use batteries rather than supercapacitors and the original vehicles are... View
Ashley Wright - 39 minutes ago
Susan Williams that’s good because light rail whilst using similar vehicles is different to a tram way in that it is design... View
Ian - 50 minutes ago
Seems stupid to me to be building this section when the government doesn't have all the approvals lined up for getting over t... View
Community 15

Linda Stapleton - 51 minutes ago
mmmm war with a magpie...so who is meant to be the superior species here? No offence meant but surely making friends with the... View
Guy Noble - 57 minutes ago
Jim Vizovitis yup play nice and they do,,,, we have had the same parents coming to us to feed there kids for years now View
Jim Vizovitis - 2 hours ago
Just get out and feed him. In a matter of days you can have them eating out of your hand. View
News 248

@The_RiotACT @The_RiotACT
Funds from The Better Challenge go towards fighting childhood #cancer, a disease that affects three families every day in #Australia - and Canberra's own rugby team, @BrumbiesRugby, is helping out https://t.co/oO200sxG3s (1 hour ago)