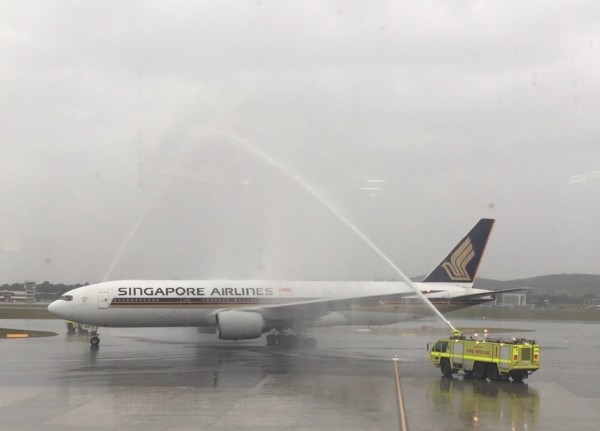 Fresh off the first ever Singapore Airlines flight direct from the Asian city state into Canberra this morning, Canberra Airport chairman Terry Snow indulged in one of his favourite pastimes, having a crack at competitor Sydney Airport. 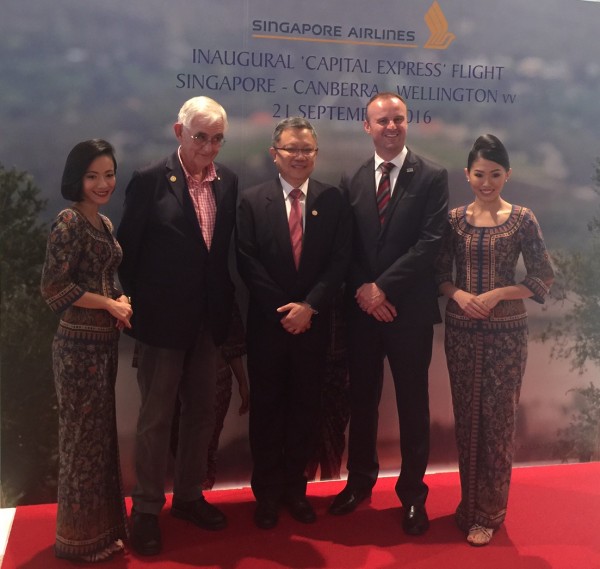 “Connecting Wellington and Canberra through to Singapore was a stroke of genius,” Mr Snow said of Singapore Airlines’ strategy to get the Canberra Airport service up and running.

“Both Canberra and Wellington suffer from the disability that we had to go through pretty dysfunctional capital city airports – Sydney, which all of you know how unpleasant that is, but Wellington has a similar fate in that to go international for most of their routes they have to transit through Auckland, and that’s not a very convenient or attractive proposition for the people of Wellington,” he said. 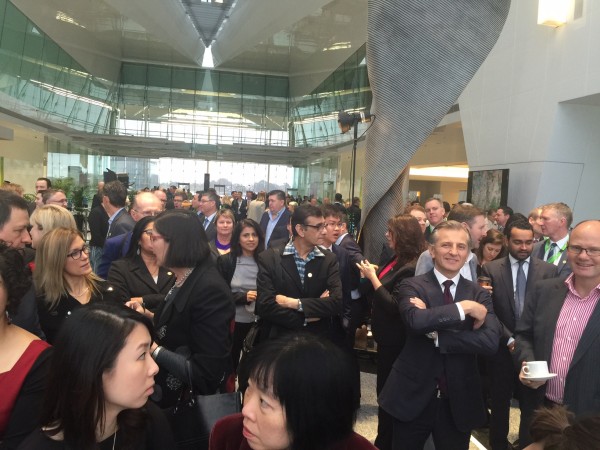 A crowd of airport staff, officials, public servants, politicians and Canberra business operators cheered from inside the main domestic terminal as the first plane from Singapore landed at around 8am this morning. The pilot taxied into position directly in front of the crowd for a dual Aviation Fire Rescue water cannon welcome for the plane and its passengers.

At around 9.25am, ACT Chief Minister Andrew Barr joined passengers boarding the same plane as it prepared to depart for Wellington. He will attend a series of functions in the New Zealand capital before returning on the first incoming flight from Wellington tonight.

We covered the landing itself here:

And you can see the water cannon salute here:

See our live coverage of the speeches ahead of the landing here: 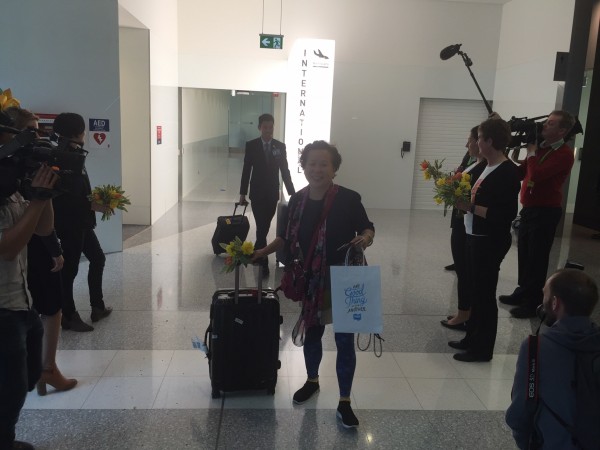 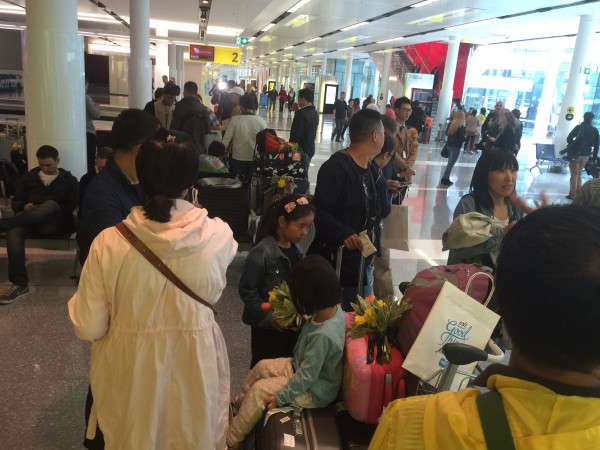 If this wasn’t serious it would be funny as Andrew Barr can’t even organise an ACTION bus to run to and from Canberra Airport:

Where is the perceived demand for this coming from?

One week a tram enthusiast, next week it’s aircraft.

It should be. It was quite cleaver of SIA to add on the Wellington tag, as the extra traffic will make it viable. CBR as a standalone city wouldn’t have the capacity, but add Wellington you are killing 3 birds with the one flight. Only thing is for other airlines if they wanted to fly here they would need to do much the same thing, but there are of course only so many extra hop ports to fly to.

So my ‘guess’ is maybe direct CBR-AKL flights on a 737, possibly an Emirates flight as a spolier, but others may struggle.

Thanks very much to Riot .. A great coverage of a historic day.

Kerry Mulgrue - 40 minutes ago
Just points out that the very existence of States and Territories is an anachronism. View
David Brown - 1 hour ago
This was always going to be a nightmare. I cannot understand how development approval was given. View
Darron Marks - 2 hours ago
That looks like a very messy problem View
Property 50

Gregg Heldon - 55 minutes ago
George Watling probably not the only one View
Annie Mills - 1 hour ago
EJ Fallon where do they say that? View
George Watling - 6 hours ago
Barr lives on the votes of the soffisticatod urbanister and trendoids. He's not old school labor. He's a cuckoo in the nest. View
News 66

John Thistleton - 3 hours ago
The lamps (bulbs are no longer manufactured anywhere in the world, apparently, and the entire equipment is more than 80 years... View
News 29

Vicky Diamond - 6 hours ago
Is anyone having trouble breathing enough air while wearing a mask? I am having that problem. I wonder if anyone else is? Its... View
Property 28

Vicky Diamond - 7 hours ago
It is a pity that NSW will not hand over the land to the ACT government. There is no way that I would live on the NSW side, b... View
Sport 6

Paula Simcocks - 10 hours ago
Not keen on lots of out of towners View
Shaan Melling - 11 hours ago
Omg I would be there in a heartbeat View
Chris Miller - 12 hours ago
Paul Powderly I feel like you could make this happen. I will pre commit to take a box View
News 6

George Watling - 12 hours ago
We don't need any more urban infill or high density suburbs like Wright in the Molongolo and Moncrieff in Gungahlin. There ar... View
News 34

Coralee Flood - 12 hours ago
Ill bet all the old typed documents and carbon copies are still legible though. It's difficult I agree. I have similar proble... View
Opinion 2

George Watling - 13 hours ago
It’s all a bit too rich coming from Mr Barr when: 1. the only urban sprawl we have in Canberra can be found in the micro-bl... View
show more show less
*Results are based on activity within last 7 days

Canberrans are being prepared for the prospect of wearing a face mask out in public after ACT Chief Minister Andrew...
Community 45

While the treasured Lifeline Bookfair will not be going ahead as planned because of COVID-19, there is still some good news...
Property 9

Binalong is just past Yass, around 75 minutes from Canberra's city centre. It's a peaceful town, with a population of...
*Results are based on activity within last 7 days

For months during the COVID-19 shutdown, I have seen local kids in and around Duffy Street in Ainslie industriously build...
Property 74

It’s true that there is no single cause for the second wave of COVID-19 cases in Melbourne. Undoubtedly, this disease...
News 66

An icy blast of cold air will bring snow and freezing conditions to the ACT and surrounding region, followed by...
Property 50

The redevelopment of Ainslie Avenue is a step closer with the ACT Government commissioning a feasibility study so it can...
News 47

@The_RiotACT @The_RiotACT
As Canberrans we live in constant defence of our city (no, Canberra didn't raise your taxes). The same's true of your sporting teams, whether it's the 'six again' controversy that robbed the Raiders or the endless talk of scrapping or merging the Brumbies https://t.co/dCqX1k10yk (2 hours ago)

@The_RiotACT @The_RiotACT
Two new programs worth a combined 30 driving hours will be delivered by the ACT Government to help keep learner drivers safe on the road. They're part of the Government's effort to move towards zero road deaths or injuries in the ACT https://t.co/D5o8YPG8yM (12 hours ago)

@The_RiotACT @The_RiotACT
Press pause on any health kick you might be embroiled in and take a look at the deep-fried deliciousness on offer at Chunky Town https://t.co/YAlZW8dqVU (13 hours ago)