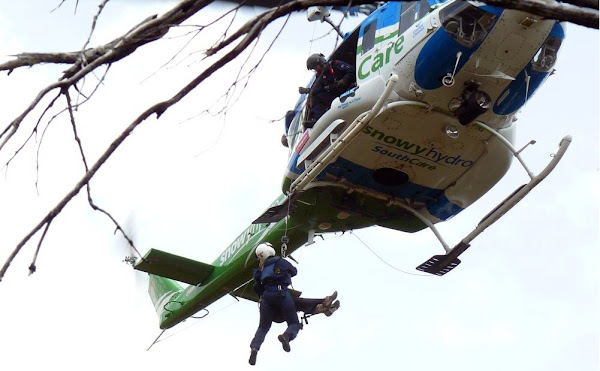 Snowy Hydro SouthCare are making sure we know they’re approaching a major milestone:

Canberra and the region’s local rescue helicopter service is fast approaching a milestone of 5,000 missions in its 15th year of operation. Snowy Hydro SouthCare expects to perform its 5,000th mission before the end of January.

Since 1998 the Snowy Hydro SouthCare Aero-Medical Rescue Helicopter has been serving the ACT and surrounding region, extending as far North as Orange, South to the Victorian border, and up the NSW East Coast.

The helicopter responds to an average of two missions per day, and in 2011-2012 performed 450 missions – an increase of 20% on the previous year.

Snowy Hydro SouthCare CEO, Owen Finegan says: “With increasing mission statistics and costs, it reinforces the need for community support. When you hear or see the helicopter flying overhead, I urge you to stop and consider the important role the service plays in your community”.

In 2011-2012 the majority of missions performed were hospital transfers from regional centres to The Canberra Hospital, or to specialised hospitals in Sydney. The typical patient was a male, over 45 years residing at the NSW South Coast with injuries from an accident.

Shame they’re not fully funded by government, which would save them having to beg for money (and fight with Careflight).

Shame they’re not fully funded by government, which would save them having to beg for money (and fight with Careflight).

We often see and hear them take off and land. A wonderful community service – kudos to them.

Can we have SAMs to shoot down the parasitic Careflight ?

The flight you’d never want to be on, but would be grateful for if you ever were.

Therese Maree - 8 minutes ago
So lovely! People are so clever and creative, thanks for sharing this story :) View
Jenny Brown - 12 hours ago
That is just beautiful.Merry Christmas to all of you.🎄🎄👨‍👩‍👧‍👦 View
Alex Fulford - 13 hours ago
Wonderful 🌹🌹😻 View
Breaking 3

ssek - 15 minutes ago
Can Fair Work finally do the right thing and remove their protection? They are striking over a demand for an unreasonable pay... View
mitch82 - 2 hours ago
Let's see if Labor help the community as a whole or just their union mates/donors. I want my rates back.... View
Luke Rogers - 11 hours ago
I am all for industrial action for working conditions, equity and safety but why do none of the signs in the attached picture... View
News 1

Capital Retro - 18 minutes ago
Amazing progress being made on this project. It couldn't happen like this in Canberra. View
News 53

Keran Niquet - 26 minutes ago
As usual Pinkas has got his head up his backside. Community support for his selfish actions is non existent! View
Opinion 3

Jamie Fisher - 1 hour ago
Not a bad problem to have... View
Kylie Wylie - 2 hours ago
Jessica En Bee i agree 100% View
Jessica En Bee - 3 hours ago
Parents shouldn’t hide it but kids do need to be taught about the world and how privileged they are. Awareness of poverty a... View
News 32

Clare O'Rance - 2 hours ago
Great idea with so many women needing housing support. I wish YMCA all the best. View
Ian Hubbard - 2 hours ago
Good point Brent. Unfortunately the business model for community and sporting facilities is no longer viable. Like newspapers... View
Brent Hutch - 9 hours ago
Ian Hubbard places come, places go. I guess no one catches up with each other these days because the Bowlo went... Or perhaps... View
News 56

Oliver Raymond - 11 hours ago
Charles Godworth It was another Seselja ambush. There was no need for the urgency. Not enough time to find a strong alternati... View
JC - 16 hours ago
I think those sanctimonious labor voters are bright enough to seperate federal and “state” politics. However they are als... View
News 1

Capital Retro - 12 hours ago
"The allegations give greater insight into the party marred by factional infighting." Every day, the Canberra Liberals are em... View
Property 1

realist - 13 hours ago
It is a pity that the people giving these awards do not look at the quality of the build and the many many defects that new o... View
Opinion 1

DJA - 16 hours ago
A shout out of thanks to the ACT Government for the COVID-related grants to help get community sport back up and running. Thi... View
Community 4

Negotiations over pay and conditions which could avert strike action are continuing between garbage collection company Suez and the drivers'...
News 32

YWCA Canberra has lodged a development application for its contentious single-storey, 10-unit supportive housing project in Ainslie that has faced...
Opinion 36

@The_RiotACT @The_RiotACT
Zoya Patel asks, should children be made aware of their wealth and privilege, or does it make it harder for them to be empathetic adults? https://t.co/jgY3ncaK2I (2 hours ago)

@The_RiotACT @The_RiotACT
CBR singer-songwriter Hedy Blaazer celebrates the release of her first studio EP this week. All the details of her show & plenty of others are in our latest #GigGuide https://t.co/qFsua3pban (11 hours ago)

@The_RiotACT @The_RiotACT
After months of work by crafters worldwide, the Remake Christmas project is set to send more than 100 decorations to Cobargo and Quaama https://t.co/Fbnf4wE4rD (12 hours ago)