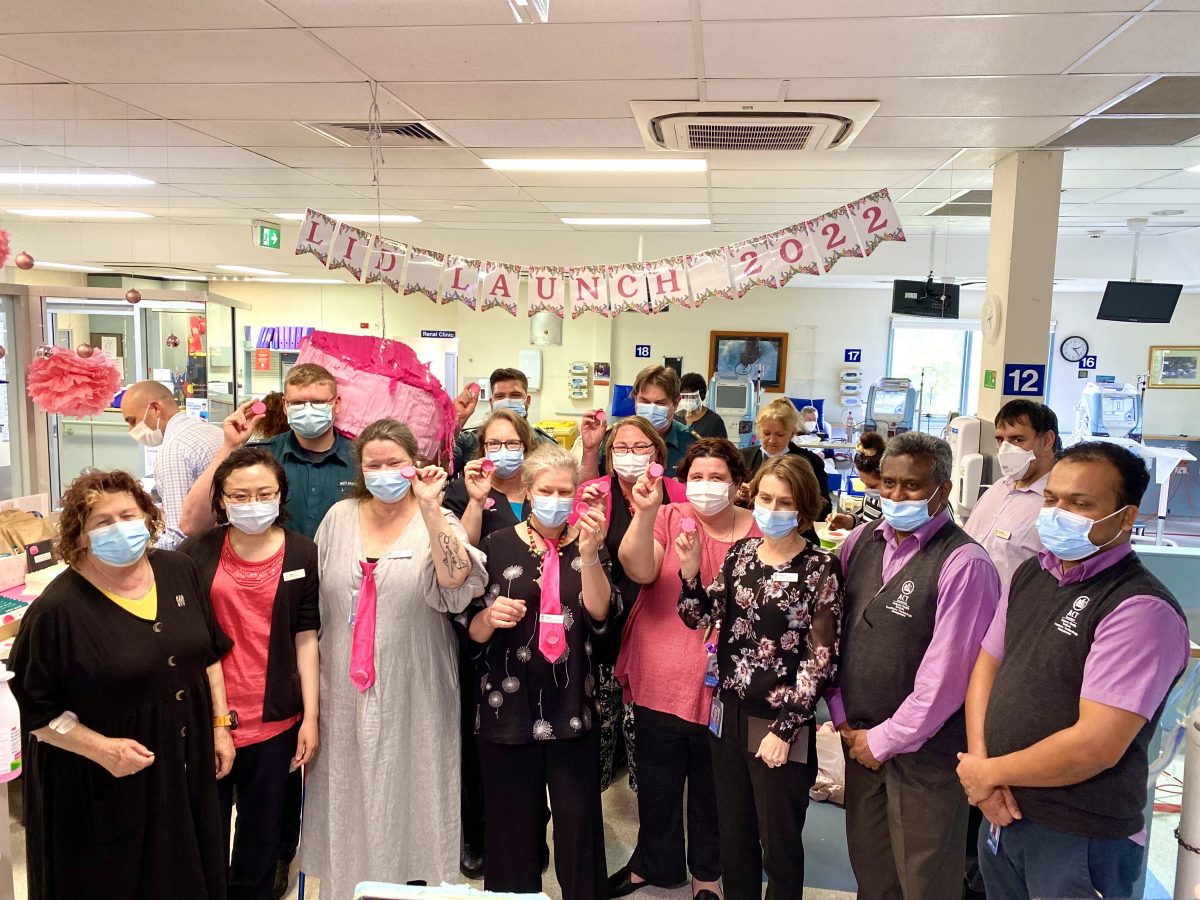 You’ll never look at your milk and juice bottle lids the same way – the ACT and surrounding area has become the first region in Australia to launch a new method designed to help save the lives of patients on dialysis.

The “Stop the bleed – use a lid” initiative, launched by Canberra Health Services in collaboration with Southern NSW Local Health District educates communities about how to help end-stage kidney failure patients if they experience life-threatening bleeding.

These patients are commonly dialysed through an arteriovenous fistula (AVF) or graft (AVG) with high blood flows. As more than 80 per cent of AVF and AVG ruptures occur at home, “Stop the bleed – use a lid” creates a temporary solution by placing a lid on top of the bleeding until the patient can be transported to the nearest hospital.

Canberra renal nurse Janelle Rae said “Stop the bleed – use a lid” was based on a UK initiative to stop fatal haemorrhages.

“Normally people don’t survive this. Often a gauze or towel is put on top to try and stop it [the bleeding]. That actually creates a wicking effect.

“The lid will cover the problem and stop the blood from flowing.”

Janelle said the hospital had distributed a fridge magnet with a lid attached. This made it easy to locate and access for nurses in the hospital, and for families and patients at home.

“It’s easy because it just sticks on the fridge and everybody knows where the lid is,” she said.

“There is a fridge in pretty much every building in the hospital too, and other magnetic surfaces as well. It just allows you to be able to place it wherever and it’s easily accessible.

“Our patients will also receive a bag with about five lids in it, so they can pop them into their pockets, bags and cars. So if it happens, they’re prepared.”

Janelle said dialysis patients needed needle sessions three times a week. This sometimes meant their skin and vessels became thin and could cause aneurysms, blisters and scabs that didn’t heal and ultimately ruptured.

“It’s rare, but when it does happen, it’s catastrophic,” she said.

“The person doesn’t have a long time to act. It’s an arterial bleed, so it’s pumped directly from the heart and a lot of these accesses [for dialysis] are having between one and two litres of blood going through per minute.

“We want the lids to be the first things people think of if a rupture occurs. That’s why we are trying to make it immediately accessible.” 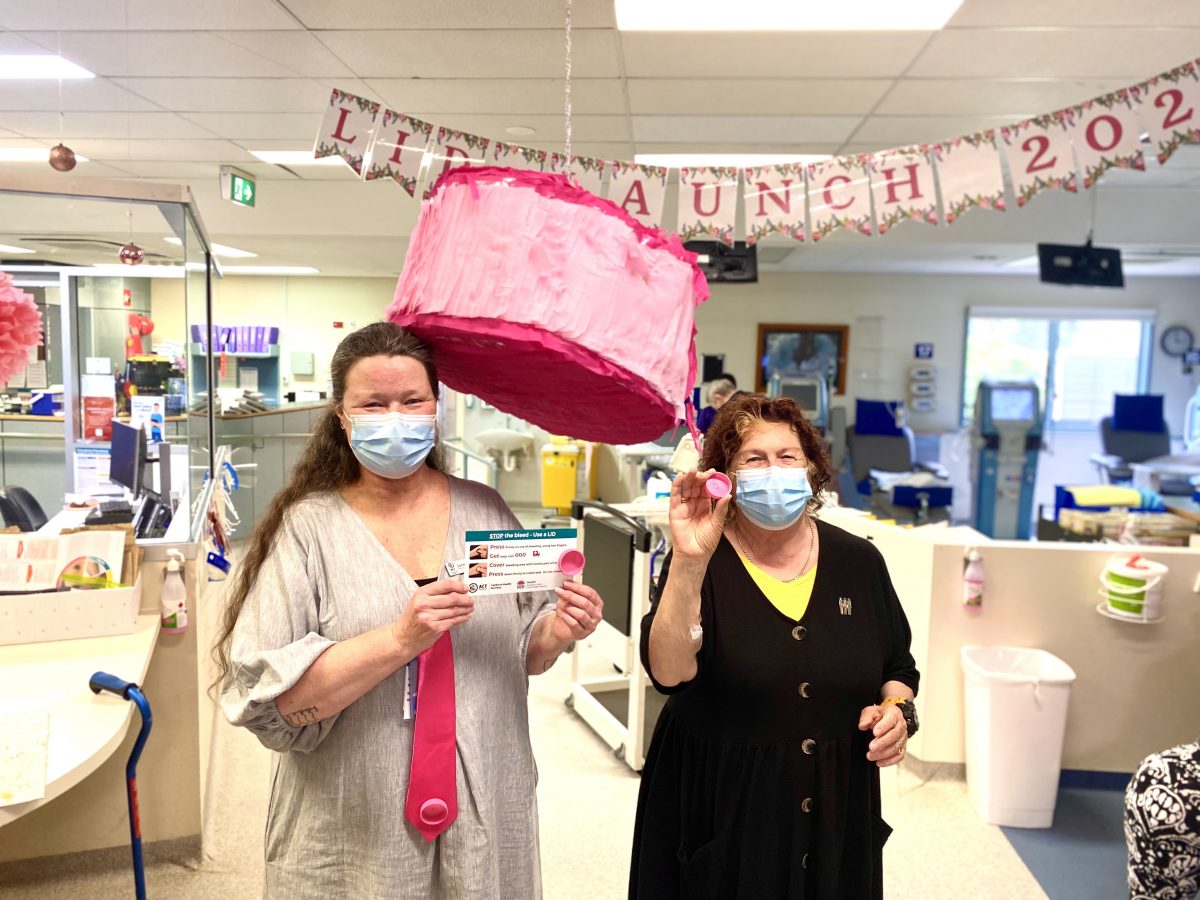 Janelle said a similar simple but effective project was in the works at the Princess Alexandra Hospital in Brisbane.

“As the lids are designed with a little bit of flexibility, it creates like a little vacuum under it to capture the blood,” she said.

“Your body then tries to clot, as it knows there’s a wound.

“It then creates this tamponade effect, which actually enhances the clotting process. The lid then needs to stay in place until you get to theatre. The ambulance is also equipped to tape it on until the patient gets to the ED [Emergency Department].”

Dialysis patient Helen Jarzynski said the lids were a life-saver and provided great peace of mind.

“When you hear about these stories of people bleeding out, and they experience a rupture, that’s terrifying for a patient,” Helen said.

“Now if I’ve got one of these [lids], I know exactly what to do. It’ll be a great relief to a lot of patients.

“They are also such an easy thing to explain to patients. Even if they’re not good with medical terms, it’s just so easy to say put the lid on it.”

Helen recommended all patients should keep a lid handy.

“You can put one in your pocket when you’re going out somewhere, have one in the car, and have one at home on the fridge” she said.

“Anything can happen. Keeping one of these lids close by can save a life.”