Foxsports have the sad news the the Melbourne Storm have ended the Raiders home streak in emphatic fashion:

RABBITOHS fans beware the Storm are back and they are coming to get you.

The two NRL powerhouses will go head-to-head in what promises to be one of the games of the season in Melbourne next Friday night.

But while the Rabbitohs will go into the blockbuster coming off a demoralising 30-12 defeat to North Queensland on Saturday night, Melbourne turned on their best effort in months with a thumping 68-4 victory over Canberra on Sunday.

The Storm raced in 12 tries to one to hand Canberra their biggest ever defeat. 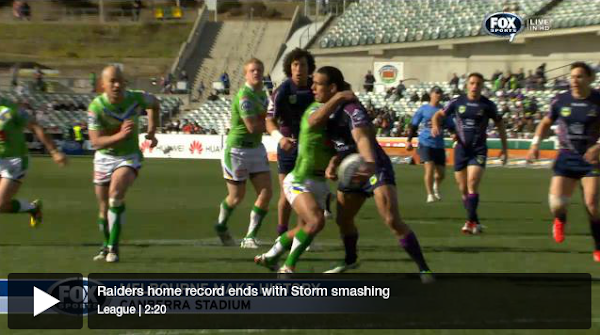 And they wonder why fans don’t turn up to watch.

They were just under 11,000 people there yesterday.. That is usually a good turnout..

Although the radio reported alot of people left at half time…

As the Swaggettes took me on a tour around the Inner Bowl during the warm ups it was noticeable how the Storm players were quiet, grim faced and focussed yet when we got down to the other end the Raiders seemed to be chatting and joking and Campese in particular was laughing all the way through – granted it was his birthday but I thought even then there was a marked contrast in the attitude of the two sets of players. The game itself was embarrassing.

If the Raiders and Brumbies combined their best players – they’d still be a mediocre touch footy side.

And they wonder why fans don’t turn up to watch. Sure its not the end of the season for the Raiders, but efforts like this just don’t happen to quality sides. You only need to look at the fact we’ve won more games than we’ve lost with a negative For and Against to realise, we lose big quite often.

Admittedly, luck was the difference in the first 20, a foot into touch for the raiders vs an aerial pass from over the dead ball line. Still it was like they decided screw this lets not bother.

I’m sure i’ll forget this if we somehow pull off a miracle next weekend!

There’s no shame in losing to the Melbourne Storm.

However, losing to anyone 68 – 4 is just unprofessional. The club as a whole should be embarrassed. What a shameful display.

What an absolute shellacking, shameful performance!

steve2020 - 13 minutes ago
Canberra is too small to even consider hosting an Olympics. Brisbane has experience with World Expo '88 and Commonwealth Game... View
Lifestyle 9

S Bright - 1 hour ago
Sorry, but no. 'We don't need the vaccines'??' Yes, we flipping well do! We're already giving 10% of our vaccines to NSW. I'm... View
Sam Oak - 2 hours ago
No surprises here that a labor government is refusing to help a liberal government. We are only shooting ourselves in the foo... View
News 43

Finally Relented - 2 hours ago
Yes - have noticed this too. An elderly lady was quite distressed at a Coles, and said she didn't own a phone and didn't know... View
TimboinOz - 2 hours ago
These blocing pages should be scanned for finger-prints. All antivaxers are boof-heads or worse.... View
Yvon Nemchinov - 2 hours ago
Well considering you have probably never lived under totalitarian rule, I expect you to lack understanding, Matthew. All of t... View
Property 3

Richard Allen - 3 hours ago
I hope it will not look like the old building itwas a didgrace View
Ian E Wheeler - 4 hours ago
The real classy heritage 'old' one was bulldozed years ago. View
Dan Myles - 4 hours ago
Base the design on the original threaten and restore some of the historical charm to the area . For a uniquely designed Capit... View
News 77

Bob Fraser - 3 hours ago
Good on you Debbie, some sound advice at last amongst a lot of cringe-worthy comments. View
Geeta Datta - 4 hours ago
Kieran Angus Maybe, it's an EEG I'm thinking of. It's amazing how little they tell you about yourself lol. View
Julie Macklin - 5 hours ago
Nora PrestonPlease give the source of that graph. Without a source it’s worthless. View
Opinion 3

Nick Swain - 4 hours ago
As well as potentially great public art the major attraction of this area to be maximised is its heritage. The ACT Heritage C... View
Opinion 6

John Moulis - 4 hours ago
The Australian basketball team in the 1972 Munich Olympics. I vaguely remember that game. Australia was playing the US dream... View
show more show less
*Results are based on activity within last 7 days

@The_RiotACT @The_RiotACT
Parliament resumes next week with tight COVID restrictions in place. Here's what they're doing to ensure the spring session doesn't become a super spreader event https://t.co/quwzRWDryJ (58 minutes ago)

@The_RiotACT @The_RiotACT
To catch illegal dumping in the Territory, the government placed 16 cameras at popular dumping locations. Watch some of the worst offenders in action https://t.co/5t9dKX5r2e (59 minutes ago)

@The_RiotACT @The_RiotACT
The ACT will increase its Pfizer vaccine rollout this week but won't be sending supplies to NSW. Around 10 per cent of ACT jabs currently go to people who live in NSW https://t.co/YI8DV5O0gi (2 hours ago)