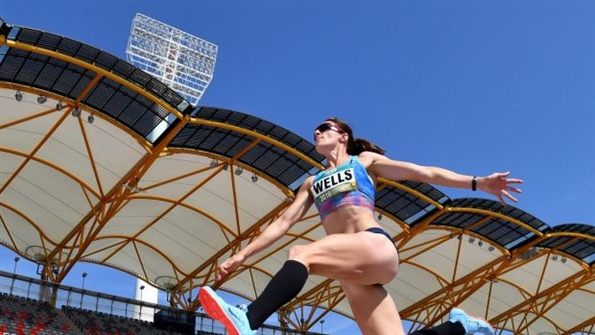 Lauren Wells will head to her fourth Commonwealth Games and will represent Australia in the long jump and the 400m hurdles. Photo: Supplied by ACT Athletics.

Seven Canberra athletes have been selected to represent Australia at the 2018 Commonwealth Games with Athletics Australia finalising their 109 member team for the Games in April.

Lauren Wells will be one of seven Canberra athletes heading to the Gold Coast with an additional eight ACT-based athletes selected to represent Australia.

Wells will head to her fourth Commonwealth Games and will compete in the long jump as well as the 400m hurdles.

Wells is no stranger to the Commonwealth Games home crowd, having competed at her first games as a 17-year-old in the 2006 Melbourne Games in the 400m Hurdles. Wells went on to finish 4th in both Delhi (2010) and Glasgow (2014) Games. Wells will also compete in the long jump, which she has not competed at an international level since the 2007 World University Championships in Bangkok where she finished 6th.

Well’s coach, Matt Beckenham, will have a busy games, with his pupil Melissa Breen also competing in the 100m and 4x100m events. Breen is off to her third Commonwealth Games, after being a semi-finalist in Delhi (2010) and Glasgow (2014) in the 100m.

The ACT will be well represented in the field events with Glasgow javelin bronze medallist Kelsey-Lee Roberts off to her second games. Roberts’ coach and partner Mike Barber has had his work cut out over the past 6 months converting 2017 World Champion and World Record Holder in the F38 javelin, Jayden Sawyer, into a shot putter, work paying off with Sawyers selection for the 2018 Commonwealth Games in the F38 shot put.

The F38 shot put is expected to be dominated by ACT realtor Cameron Crombie who last year took out the F38 shot put at the 2017 World Para Championships in London.

Chris Hamer, who has been a middle distance runner for the past decade, made the switch to marathon running last year and qualified for April’s Gold Coast Games in his first attempt. Hamer shot up the rankings in 2017 with a 2.13.32 Marathon in Amsterdam which secured his selection for the Commonwealth Games. Hamer, originally from Victoria, relocated to Canberra to train under legendary distance coach Dick Telford.

Below is a full list of Canberra athletes and Canberra-based athletes selected to represent Australia.